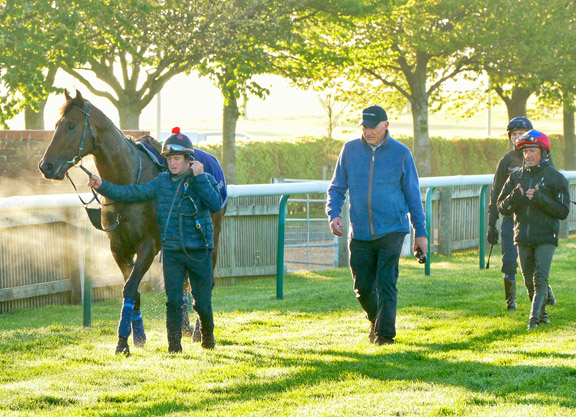 Last season's G2 Coventry S. winner Calyx (GB) (Kingman {GB}) will not line up for the QIPCO 2000 Guineas next Saturday and is instead likely to make his seasonal debut in the G3 Merriebelle Stable Commonwealth Cup Trial at Ascot on Wednesday.

Frankie Dettori was aboard the Juddmonte homebred for a gallop on the Rowley Mile on Friday morning, immediately after which his trainer John Gosden and Juddmonte's racing manager Lord Grimthorpe indicated that a decision would be made regarding the colt's participation in the first Classic of the season over the weekend. However, by lunchtime on Friday Calyx had been ruled out of the Guineas, which would have been his first start in a little over ten months after he suffered an unspecified injury in training last July.

“Both John Gosden and Frankie Dettori felt that to go straight to the 2000 Guineas after such a long lay-off would be asking too much,” said Grimthorpe.

During his early-morning exercise over the Guineas course, Calyx was joined in the gallop by First Eleven (GB) (Frankel {GB}), ridden by Rab Havlin, and pulled clear of his workmate once out of the dip.

Gosden said afterwards, “I'm happy with his work, it was a nice, normal blow and he picked up well. The ground was very much on the good side, with the odd good to firm patch.”

Calyx will now be one of the potential stars on show during the inaugural Royal Ascot Trials Day on Wednesday and is among 14 entries for the race formerly known as the Pavilion S., which has been branded as a trial for the G1 Commonwealth Cup. Despite making his comeback over six furlongs, the colt is expected to be stepped up to a mile later in the season.

The opening meeting of the season at the Berkshire course also includes the G3 Longines Sagaro S., which is a qualifying race for the Weatherbys Hamilton Stayers' Million, as well as the five-furlong Royal Ascot Two-Year-Old Conditions Stakes. The winner of the latter £14,000 contest will be given free entry to any of the six juvenile races at the royal meeting.