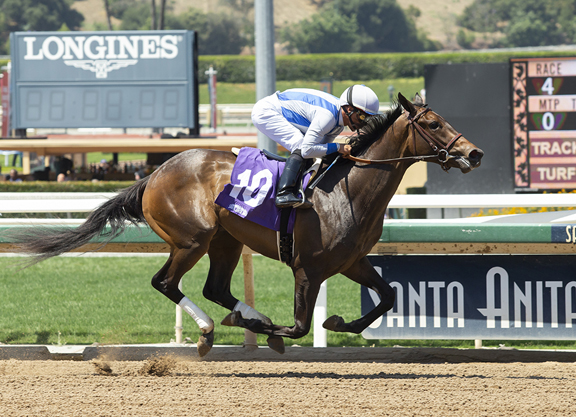 Trainer Simon Callaghan will be at Saratoga Saturday to saddle Bellafina (Quality Road) in the GI Longines Test S., and a short time later, the conditioner will be glued to the nearest television set to watch 'TDN Rising Star' Amalfi Sunrise (Constitution) give the barn consecutive victories in the GII Sorrento S. at Del Mar.

A $40,000 Keeneland September yearling turned $185,000 OBS April purchase, the racy-looking dark bay was pounded into 11-10 favoritism for her June 23 debut at Santa Anita, and although she was beaten for speed by Save the Story (Will Take Charge), Amalfi Sunrise settled kindly off that one's flank, dueled into upper stretch and pulled clear to score by 6 1/4 authoritative lengths despite having a couple of looks at the grandstand. She has logged no fewer than four works since, including a five-furlong drill in 1:01.20 at the seaside oval July 19.

Trainer Doug O'Neill is a two-time winner of the Sorrento and in the form of Comical (Into Mischief), he'll have solid claims to add to that total. Herself a dominating six-length Santa Anita graduate May 26 in a time fractionally faster than Amalfi Sunrise, the bay made the trans-continental trip to Saratoga and fought her way to a narrow victory in the GIII Schuylerville S. July 11. Comical tuned up for the Sorrento with a half-mile drill at Del Mar in :48.20 July 27.

In addition to Constitution, another pair of freshman sires are represented in the Sorrento. The Callaghan-trained Shedaresthedevil (Daredevil) employed stalking tactics en route to a 3 1/4-length success for Glencrest Farm and Norm Casse at Churchill June 13. An interest has since been sold to Qatar Racing. Arkansas-bred Powerfulattraction (Commissioner) finished up running to break her maiden by 1 1/4 lengths at first asking at Los Alamitos June 29 and adds Lasix for this far taller task.