California Memory: The Little Horse That Could…And Did 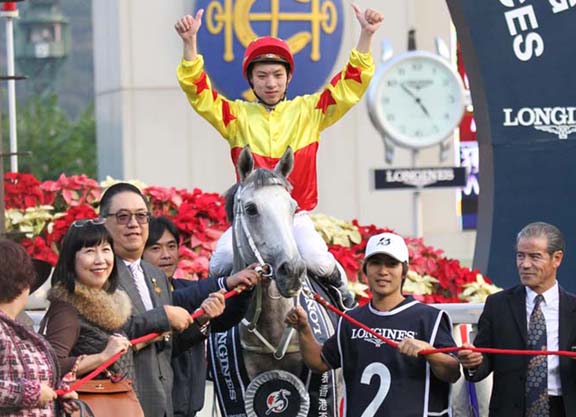 A good horse can come from anywhere, can come in all shapes and sizes. Perhaps no horse in the history of the Hong Kong turf embodies that idea more than the diminutive, but wildly talented California Memory (Highest Honor {Fr}–Kalpita, by Spinning World).

Brookdale Farm's Fred Seitz acquired Kalpita privately after she was led out unsold on a bid of 48,000gns at Tattersalls December in 2005 and the mare foaled a grey colt Mar. 2, 2006. Hailing from the female family of champions Bosra Sham (Woodman) and Hector Protector (Woodman), the colt was consigned by Seitz's Brookdale Sales to the 2007 Keeneland September and was off to Europe following a winning bid of $65,000. In an ironic twist, his third dam has come to include Gaudeamus (Distorted Humor), whose son Golden Sixty (Aus) (Medaglia d'Oro) is the early favorite for Sunday's G1 Longines Hong Kong Mile.

Placed in his first two career starts at San Sebastian in Spain, Portus Blendium won his maiden at third asking at Dax in extreme southwestern France. He acquitted himself nicely at metropolitan tracks in early 2009, and it was a conditions victory at Chantilly that May that caught the attention of many, including Marie Yoshida.

“A good friend of mine, Francois Dupuis, contacted me and at the same time, my loyal and longtime Hong Kong client Dr. Thomas T.S. Liang was in search of a promising young racehorse. We contacted trainer Carlos Laffon-Parias, but it was only after his third-place finish in the Listed Prix Matchem that we were able to secure him.”

Ahead of Portus Blendium in the Matchem were future Godolphin star Cavalryman (GB) (Halling) and a future legend by the name of Cirrus des Aigles (Fr) (Even Top {Ire}). It would not be the final time the rivals met.

Portus Blendium made one final start in France, a third in the Listed Prix Tourgeville in August 2009, but tragedy struck a short time thereafter, as Dr. Liang passed away suddenly the following month. His final purchase was renamed California Memory by his family, who crossed their fingers that they might have a Derby runner on their hands.

Under normal circumstances, it is tough to prepare a European import for a Classics season (for 4-year-olds in Hong Kong), but it was not straight-forward for California Memory. Having raced in France as a ridgling, he underwent gelding surgery once he got to Hong Kong, and made his local debut in February 2010, finishing 11th at long odds in the Hong Kong Classic Cup just one month prior to the Derby. It wasn't meant to be. He returned a better horse that latter half of that season and would go on to win a pair of Class 1 handicaps, but he was no better than a 30-1 shot against the likes of veterans Irian (Ger) (Tertullian) and Viva Pataca (GB) (Marju {Ire}) in the 2011 G1 Hong Kong Gold Cup (2000m). Racing for Dr. Liang's son Howard and with homegrown rider Matt Chadwick aboard, California Memory–all 981 pounds of him–got well back, but kicked hard in the final 200 meters to cause the boilover (see below), prompting commentator Darren Flindell to anoint California Memory a champion stayer of the future. A prescient comment, indeed.

“I vividly remember receiving a phone call from Howard Liang and there was so much emotion. I could not stop smiling and crying at the same time,” recollected Yoshida. “We could feel that something very special had just happened, as if Dr. Liang was there with us.”

California Memory won the 2011 Sha Tin Trophy H. over an insufficient 1600-meter trip off a five-month layoff with 130 pounds on his back and was fourth at odds on in the G2 Jockey Club Cup ahead of that year's Hong Kong Cup. Forced to race handier to a slow pace while facing true international competition for the first time, he was short of room at a crucial stage, but bulled his way through to defeat Irian, with his old mate Cirrus des Aigles fifth (video).

“We were so proud that this horse could represent Hong Kong and that Matthew Chadwick, who attended the Hong Kong Jockey Club jockeys' school, would have such success,” Yoshida said.

If anything, California Memory was in even better form heading into the internationals of 2012. Having won the Jockey Club Cup this time around, he was the 17-10 favorite on the big day and it was an easy watch for his backers, as he ran to daylight after saving ground throughout and powered home easily best to become the first–and only–two-time winner of the richest of the HKIR (see below).

“Frankly, we were hoping California Memory could do it, but we did not 100% believe he could,” Yoshida reflected. “Tony Cruz had him in peak form and it was such a big honor for Howard Liang and his family to be there and race for Hong Kong. Everything happened in slow motion that day, it was surreal. It was a celebration of Dr. Liang's life and the family's long-term racing accomplishment in Hong Kong. Mrs. Liang and several grandchildren were there. It was just perfect.”

California Memory made the 2013 G1 Champions and Chater Cup (2400m) the last of his 12 career victories and earned him champion stayer honors that season. He retired from racing in 2015 with earnings of $6,687,501 and lives out his days at Living Legends just outside of Melbourne, where he shares space with other HKIR winners Silent Witness (Aus), Good Ba Ba, Peniaphobia (Ire), Mr Stunning (Aus), Beauty Only (Ire) and Designs On Rome (Ire).

Japan's Win Bright (Jpn) (Stay Gold {Jpn}) could equal California Memory's achievement when he goes out in defense of his title in Sunday's Hong Kong Cup.