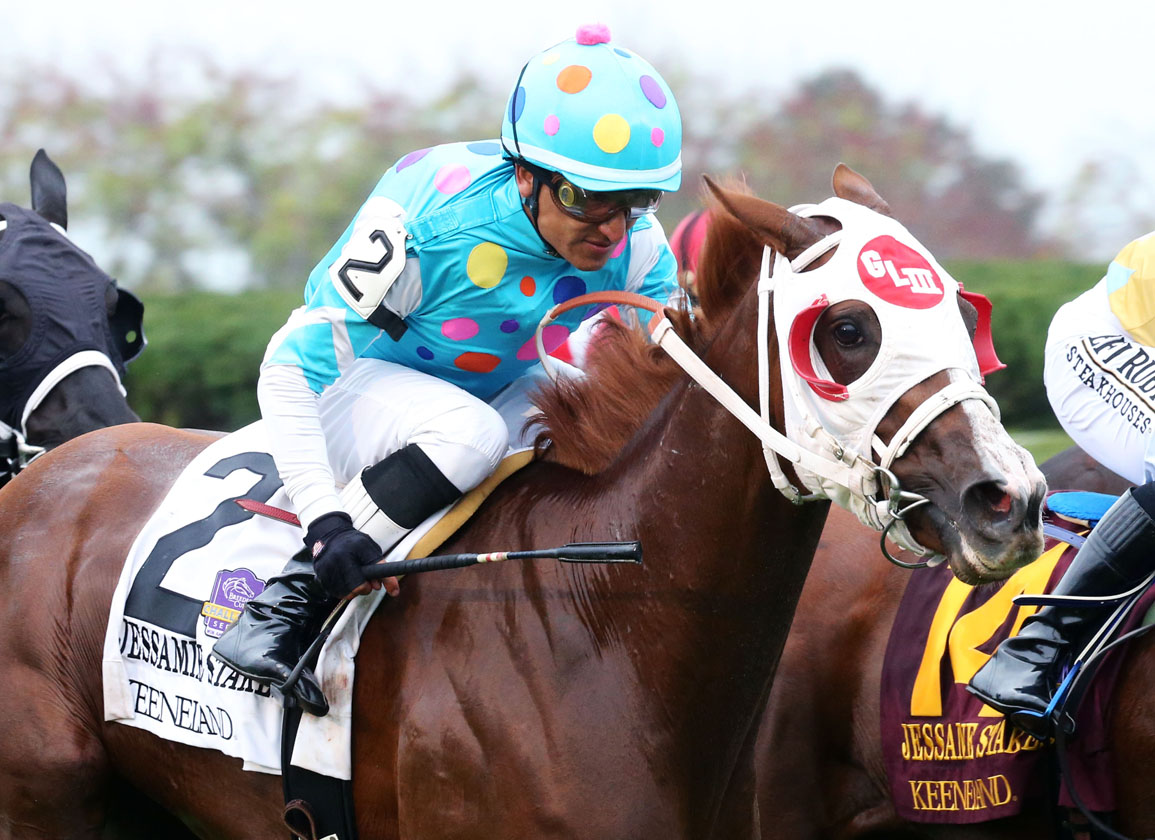 When trainer George Leonard III began training horses in 1991, his stable was represented by two winners that earned a grand total of just over $5,000 combined. The conditioner's 15th winner of 2021, California Angel (California Chrome), earned a check better than 20 times that amount in Wednesday's GII JP Morgan Chase Jessamine S. at Keeneland, coming with a strong finishing kick over the top of rivals to give Leonard III his first stakes victory of any variety while securing a fees-paid berth into the field for the GI Breeders' Cup Juvenile Fillies' Turf Nov. 5 at Del Mar.

Void of any early speed as heavily favored Turnerloose (Nyquist) tried to build on her victory in the Kentucky Downs Juvenile Fillies Sept. 6, California Angel settled one from the tail and three wide down the backstretch and into the second turn. Ridden along by Rafael Bejarano five-sixteenths of a mile from home, the chestnut was produced on the grandstand side in upper stretch, some eight off the inside, and raced on her incorrect lead for most of the final two furlongs, but was up in the nick of time to cause the upset. Diamond Wow (Lookin At Lucky) sat a wide trip, mostly without cover, from a high draw and battled on bravely through the lane, only to be pipped late while covering 17 feet more than the winner, per Trakus. Turnerloose had no visible excuse in third.

California Angel was no better than a 28-1 gamble for her Sept. 8 unveiling going the mile at Kentucky Downs, and she was off to an inauspicious and awkward start before settling in a detached last of nine. Ridden without panic by Bejarano, she was steered into the three path at the half-mile point, made eyecatching outside progress in the false straight and kicked home powerfully down the center to score by 2 3/4 highly impressive lengths. She wasn't off to the most promising of beginnings when last seen in a six-furlong allowance over the Churchill main track Sept. 30, but she gained steadily to round out the trifecta.

“I thought I had a special filly from the beginning, but I never dreamed of being here,” Leonard said from the winners' celebration on the Keeneland turf course. “After she won [her debut], I heard all this talk and we decided to try this. It's just been a dream come true. Everything's worked well, got an excellent rider in [Rafael Bejarano]. He gets along with her good. She made a perfect run. I couldn't ask for anything more. We're looking forward to California.”

California Angel is the second graded winner and second black-type winner for her expatriated sire, joining GII Prioress S. upsetter Cilla. One of 47 North American winners from her sire's two crops to race (78 winners including the Southern Hemisphere), California Angel was acquired by the BBA (Ireland) for $60,000 in utero at Keeneland January in 2019 and fetched $5,000 as a KEENOV weanling 10 months later. Leonard signed the ticket on California Angel after she worked an eighth of a mile in an extremely green :10 3/5 at this year's OBS June Sale.

The Feb. 10 foal is out of a stakes-placed half-sister to SW Let Em Shine (Songandaprayer) and Puerto Rican SW Golden Diamond (Gemologist) and is a half-sister to a yearling Distorted Humor filly that sold to Niall Brennan for €72,000 at this year's Goffs Orby sale. Sea Mona is the dam of a weanling filly by Irish National Stud's outstanding Invincible Spirit (Ire).