Caledonia Road Much the Best in Juvenile Fillies 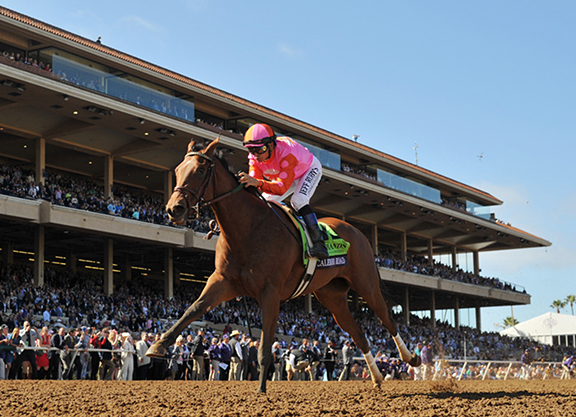 Caledonia Road (Quality Road) covered no fewer than 27 ft. (approx. 3 1/4 lengths) more than every one of her rivals in the GI Breeders' Cup Juvenile Fillies according to Trakus data, but the wide trip certainly didn't seem to bother her as she kicked home impressively as a 17-1 outside. Up-close Alluring Star (Exchange Rate) fought on for second while Blonde Bomber (Fort Larned) further spiced up the trifecta at 30-1.

“This filly has come into her own this fall and her timing was impeccable,” said winning conditioner Ralph Nicks. “This run down the stretch is kind of her style. This is my first win [in the Breeders' Cup] and it's on my third try. It's just amazing.”

He later added, “Growing up the way I did, and working for [Bill] Mott for 13 years with the champions there, and getting to witness it and be part of it on that stage and get to do it for myself, it's very, very special.”

Away well enough from the 12 hole, Caledonia Road was unable to tuck in into the first turn and was hung widest while sitting three or four deep in midpack. Dropping back slightly down the backside, the bay was scrubbed on to keep up behind a :46.72 half. She came alive rounding the home bend, picked off horses rapidly, and was up into fourth when they hit the quarter pole. Alluring Star kept on deteriminedly under left-handed encouragement, but couldn't deny Caledonia Road's powerful rush in the final sixteenth.

“She was dynamite,” offered Hall of Fame pilot Mike Smith, who was winning a record third renewal of this race. “She was much more forwardly placed than I expected her to be, to be honest. She was up there intent on getting into the game and running good. She was in a good rhythm, breathing well. I gave her a breather from the half-mile pole to the three-and-a half because she kind of wanted one. When I stepped on the accelerator again, man, she jumped back on it and I knew I was going to be live from that point on.”

This was the first time Smith had ridden Caledonia Road–Junior Alvarado had been aboard for her first two starts.

“Well, oddly enough, this is the first horse that Mike has ridden for me,” Nicks noted. “But when I was 16 and I was an apprentice jockey [at Louisiana Downs], we rode together and have been good friends since then. So we have a lot of stories and a lot of back history as kids growing up.”

Caledonia Road was campaigned by Zoom and Fish Stable and Charlie Spiring for her first two starts, and Maurice and Samantha Regan's Newtown Anner Stud bought in before the Breeders' Cup.

“Exhilaration. Total, complete exhilaration,” said Nick Sallusto, Newtown Anner's bloodstock representative along with Hanzly Albina. “Everything that goes into this behind the scenes, and of course all the hopes and wants of my good clients like Maurice and Samantha Regan, that means the world to us.”

Maurice Regan added, “It's always good to have a dream, isn't it? We'll enjoy the this ride today and look forward to the next day.”

Young sire Quality Road was himself scratched from the 2009 GI Breeders' Cup Classic after acting up during the gate load, but was also represented by 2014 GI Breeders' Cup Juvenile Turf winner Hootenanny in his first crop. His daughter Abel Tasman anexed the GI Kentucky Oaks, GI Acorn S. and GI Coaching Club American Oaks S. this year and is the probably the favorite for champion 3-year-old filly honors after finishing quickly for second in Friday's GI Breeders' Cup Distaff. The Quality Road–Dixie Union cross has been a potent one, and also produced last year's Grade I-winning 'TDN Rising Star' Klimt as well as this term's MGISP GII Gulfstream Park Oaks heroine Salty. Caledonia Road's dam is a half to multiple stakes-winning juvenile and GSP Citizen Advocate (Proud Citizen). She hails from the family of Grade I winners Hymn Book (Arch) and Data Link (War Front). Come a Callin has a yearling filly by Majestic Warrior. She was barren to Lemon Drop Kid before being bred to Blame this past season.