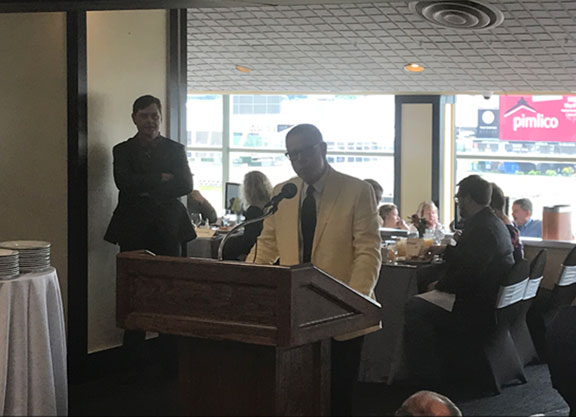 BALTIMORE, MD–Radio host Steve Byk, turf writer Bob Ehalt and the Thoroughbred Aftercare Alliance highlighted honorees at Thursday morning’s Alibi Breakfast at Pimlico, one of the longest-running traditions in the Triple Crown. A crowd of hundreds gathered in the Terrace Dining Room in the track’s clubhouse to celebrate Preakness week as the Charm City oval prepared to resume live racing later that afternoon.

The tradition of the Alibi Breakfast dates back to the late 1930s, when a group of trainers, owners and dignitaries would meet in the mornings for coffee on the porch of the Pimlico clubhouse between 6:00 a.m. and 10:00 a.m. That history, as well as the greater significance of the track in racing lore, was a clear theme throughout the morning as Black-Eyed Susans, the Preakness’s signature drink, were imbibed heartily despite the early start time.

Byk, who hosts “At the Races With Steve Byk” on Sirius/XM, the go-to horse racing radio show for the industry, was bestowed the Old Hilltop Award, given to “selected members of the sports media who have covered Thoroughbred racing with excellence and distinction.” He reflected on his personal history with the Preakness and Baltimore at the podium.

“This was my first Triple Crown event and I’ve seen more Preaknesses than any Triple Crown event,” he said. “I’ve been coming to this town on business before I went into broadcasting. I sold to kosher markets up and down Reisterstown Road. Years later I worked by the Inner Harbor.”

Byk then made a personal plea for the Preakness to remain in Baltimore and at Pimlico, referencing discussions about the race potentially moving to Laurel Park in the future, to raucous applause from the audience.

“This town means a lot to me, this racetrack, this race,” he said. “And I know that it defies logic, I know that it doesn’t make any sense, but I can’t leave this podium without saying, this race belongs on these grounds, forever. The Maryland breeder and ownership community sustained racing here through a very difficult period of time. Really call upon them to work with the city, the state, The Stronach Group, Park Heights Renaissance. People have tried to marginalize our industry, the people in this neighborhood have been marginalized. We should work together and build a new Hilltop.”

Earlier, Thoroughbred Racing Commentary’s Bob Ehalt received the David F. Woods Memorial Award, given to the writer of the best Preakness story from the previous year. Ehalt won for his “Baffert and the Triple Crown: Two out of Three Ain’t Bad? It’s Unprecedented” column after Justify (Scat Daddy) won the 2018 Preakness.

“It’s great to be able to tell the real story, not just the story how you see it,” Ehalt said. “Looking at the other winners of this award, I know I’m in good company.”

The Thoroughbred Aftercare Alliance earned the Special Award of Merit, “given to those who have made a positive impact on the racing industry” for its work in granting nearly $14 million to accredited Thoroughbred aftercare organizations. Jack Wolf of Starlight Partners, formerly TAA Board President, accepted on behalf of current TAA president Mike Meuser, who was unable to attend.

Other presentations included the Preakness Photography Award, Sponsored by Nikon to Steve Heuertz of The Horse Resource and the Honorary Postmaster to young Maryland-based jockey Wes Hamilton.