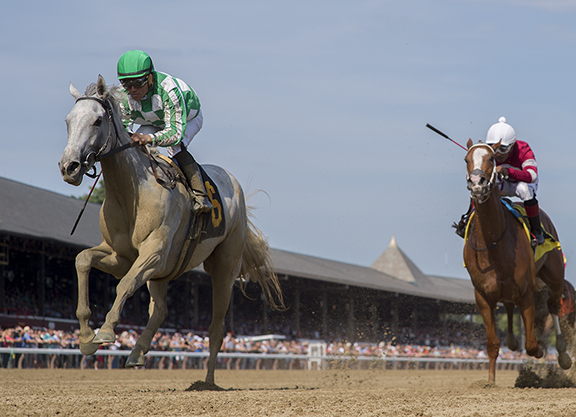 6th-Saratoga, $90,000, Msw, 8-18, 2yo, f, 6 1/2f, 1:15.85, ft.
MRS. DANVERS (f, 2, Tapit–Gracie Square, by Awesome Again)blew the break but made a big late move to fill out the trifecta when favored on debut here July 19, and entered this second attempt with plenty more buzz behind her to go off at a tick under even-money. The grey traveled in fourth early under a tight Joel Rosario hold as Finite (Munnings), who finished ahead of the favorite by a nose last time, showed the way through splits of :22.27 and :45.27. Switched out for clear sailing at the top of the lane, Mrs. Danvers took a few green strides, but soon leveled off and inhaled the leader inside the sixteenth pole to prevail by 1 1/4 lengths with what appeared like further room to improve and mature. Finite was another five lengths clear of $400,000 yearling buy Abilene Trail (Curlin), who was similarly far in front of the fourth finisher. The winner’s dam is out of MSW and GISP Starry Dreamer (Rubiano), making her a half to super sire War Front (Danzig), graded stakes winners Teammate (A.P. Indy) and Ecclesiastic (Pulpit). The unraced Gracie Square produced a Union Rags colt in 2019 and a filly by Uncle Mo earlier this year before being bred back to Munnings. Lifetime Record: 2-1-0-1, $60,300. Click for the Equibase.com chartor VIDEO, sponsored by Fasig-Tipton.
O-Allen Stable, Inc.; B-Mr. Joseph Allen LLC (KY); T-Claude R. McGaughey III.