Buzz Is Back At Goffs As Galileo Filly Brings €1.5m 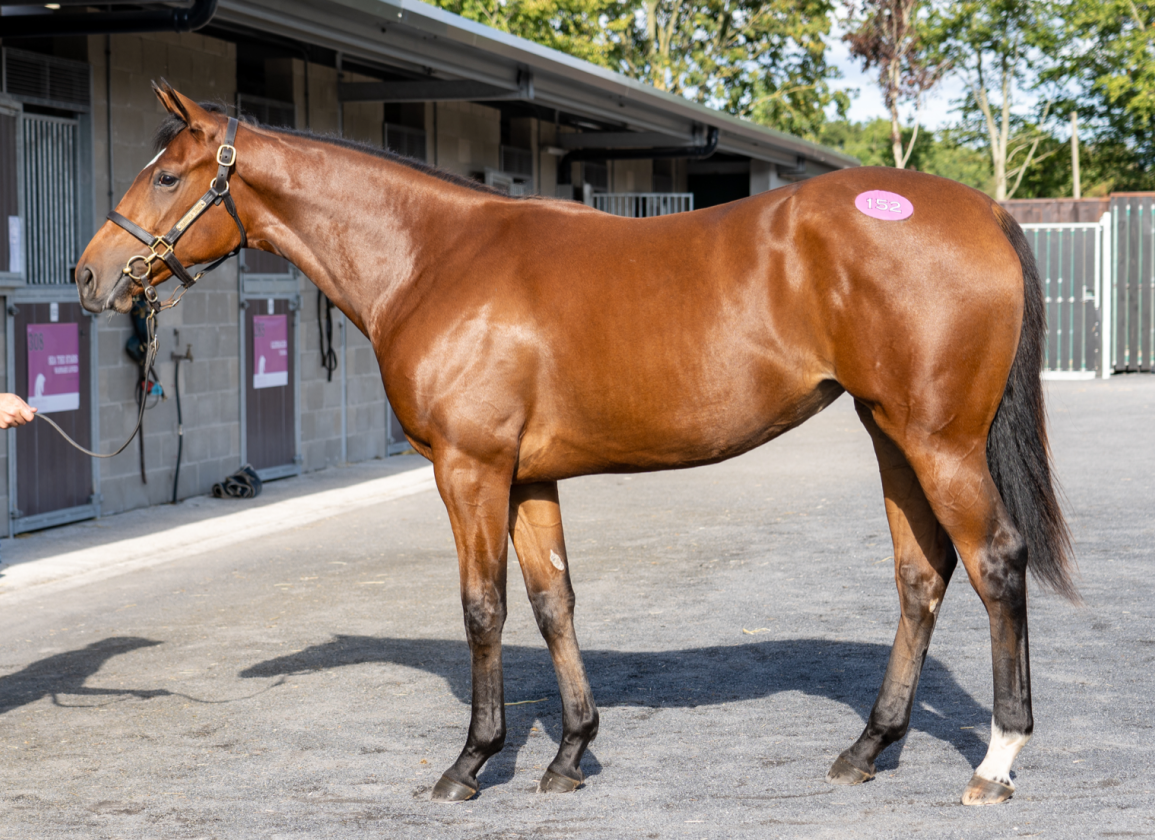 The Galileo filly out of Nickname | De Burgh Productions

KILDARE, Ireland–Galileo (Ire) may be gone but his influence will loom large for decades to come and, for the next few years, in the sale ring too. With a Galileo filly atop the leader board, bought for €1.5 million by MV Magnier, it felt like business as usual at the Orby Sale, back in its rightful home in Ireland after a Covid-induced move to England last year.

It goes without saying that a yearling by Galileo will be out of a decent racemare or producer and lot 152 is the first foal of the GI Frizette S. winner Nickname. The daughter of Scat Daddy was bought after her racing career for €3 million by Phoenix Thoroughbreds, and for that breeder she has so far produced two daughters of Galileo.

“She has lived at Coolmore all her life and she's a very nice filly,” said Magnier of the Baroda Stud-consigned yearling. “All the lads who looked after her really liked her. Her dam was very good and Scat Daddy looks he could be a good broodmare sire.”

Earlier in the day, Magnier had signed for lot 47, a first-crop son of Saxon Warrior (Jpn) out of the G1 Prix de l'Abbaye winner Gilt Edge Girl (GB) (Monsieur Bond {GB}) at €270,000. The colt represented a decent pinhooking touch for Willie Browne and Mark Dwyer, who bought him at the Goffs November Sale for €70,000 from co-breeders Blue Diamond Stud and Irish National Stud.

A day after the announcement of the retirement of St Mark's Basilica (Fr), Magnier, in partnership with Philip Antonacci and Joseph O'Brien, also went to €265,000 for the only colt by his sire Siyouni (Fr) in the sale. Lot 101, bred by Framont Ltd, was consigned by Grove Stud and is bred on the same cross as both St Mark's Basilica and fellow Coolmore resident Sottsass (Fr), being out of the Galileo mare Legende Bleue (GB), a daughter of G3 Prix Flore winner Louve (Irish River {Fr}).

🔔€1,500,000 for lot 152 @Goffs1866 Orby Sale. This filly is by the late Galileo (@coolmorestud) and out of the G1 winner Nickname. She was consigned by @BarodaStudIre and bought by M V Magnier. pic.twitter.com/nsd7RCLSE6

The second Galileo yearling bred by Phoenix Thoroughbreds to hit the leader board was lot 180, a colt consigned by Manister House Stud and sold for €440,000 to trainer Kenny McPeek, who is making his debut visit to the Orby Sale. McPeek had to see off underbidder Mark McStay for the second foal of the listed-placed Invincible Spirit (Ire) mare Pocketfulofdreams (Fr) who is a half-sister to G2 Prix de Royallieu winner The Juliet Rose (Fr) (Monsun {Ger}).

“Keeneland ran out of yearlings so we felt that we had to cross the pond,” joked the trainer as he signed the ticket. “My wife and I worked through them and he was a beautiful horse and there aren't many by the sire left. I don't know if anyone has campaigned many of them in the US but we're going to do that. There's a lot of grass racing over there and he may even handle the dirt, so it will be an interesting journey.”

McPeek added, “I've put a group of people together on him and I thought the price was very reasonable. Fortunately I have a great group of clientele and we reached out to several and four have put in together. I have a few more horses to look at tomorrow and then my wife and I are going to see our grandkids in England.”

Five lots later agent Dan Hayden secured Pier House Stud's grey daughter of Camelot (GB) (165) out of the dual-purpose racemare Pakora (Fr) (Gentlewave {Fr}), who earned black type on the Flat and over hurdles in France. The filly was also knocked down at €200,000, this time for Blue Devil Racing Stable.

The son of Footstepsinthesand (GB) had been a bold pinhook by John Christensen and Alice Weiste at €300,000 and, returned to the ring by Anna Sundstrom of Coulonces Sales, he more than doubled in price when Donohoe outbid Mick Kinane at €630,000.

“Even if you take Lucky Vega off the page, this was the best yearling I think I've ever seen,” said the agent. “I've been watching him all week and Lucky Vega had an unbelievably good temperament and this lad seems to be exactly the same.”

Lucky Vega was retired midseason after finishing second to Poetic Flare (Ire) in the G1 St James's Palace S. at Royal Ascot. He is now in his first season at stud in Australia.

Donohoe added, “Lucky Vega has had his first seven mares scanned in foal and we're close to securing a place for him at stud in Ireland. Watch this space.”

The colt is out of the unraced Queen Of Carthage (Cape Cross {Ire}), a daughter of G1 Prix de l'Opera winner Satwa Queen (Fr) (Muhtathir {Fr}). Like his older brother, he will be trained by Jessica Harrington.

Her fellow Irish trainer Johnny Murtagh will take charge of a smart daughter of Kingman (GB) out of Finsceal Beo (Ire) (Mr Greeley). A champion on the racecourse for Micheal Ryan of Al Eile Stud, the mare has been a darling of the sales ring via her offspring, with six youngsters having sold for €500,000 or more over the years, led by Ol' Man River (Ire) (Montjeu {Ire}) the Orby sale-topper of 2013 at €2.85 million.

Now 17, Finsceal Beo was back in the headlines on Tuesday when her yearling filly (lot 29) was the pick of Murtagh and Eddie Linehan at €500,000.

🍀 Lot 196 @Goffs1866 is a half-brother to G1 winner Lucky Vega and was bought by @BBAIreland for @YulongInvestme1 for €630,000. This colt is by Footstepsinthesand (@coolmorestud) and was consigned by @AnnaSundstr. pic.twitter.com/CVbvUOkRVj

Alice Fitzgerald was responsible for the day's first high point when her homebred Kodiac (GB) filly brought a bid of €340,000 from Ross Doyle. The half-sister to the Wokingham S. winner Hey Jonesy (Ire) (Excelebration {Ire}) was the sole yearling (lot 26) consigned by the breeder to the Orby Sale and she will join Richard Hannon's Wiltshire stable with the aim being to return to Ireland for next year's Goffs Million race at the Curragh.

“We knew she was really nice, she's been good from day one, but it's still a massive deal, we're over the moon,” said Fitzgerald, who bought the filly's dam Fikrah (GB) (Medicean {GB}) from Shadwell for €13,000 in 2008. A previous mating with Kodiac produced the four-time winner Loaded (Ire).

“My uncle and aunt used to have the family way back so when I saw her coming up we said we wanted her and she's a really good-looking mare. We wanted to keep the family going and there's a nice full-brother back at home in the field.”

Kodiac is also the sire of lot 78, from Tally-Ho Stud, a daughter of the unraced Inverse (Ire) (Oasis Dream {GB}), who sold for €225,000 to Amanda Skiffington. The filly hails from the Ballymacoll Stud family of Derby 2000 Guineas winner Golan (Ire) and Derby runner-up Tartan Bearer (Ire).

The Goffs Million will also be a target for the full-sister to the ill-fated 1000 Guineas runner up Lady Kaya (Ire) (Dandy Man {Ire}), who became the first Irish yearling purchase for Bill and Terry Mathis. Acting through Matt Coleman of Stroud Coleman Bloodstock, the American owners bought lot 87 for €260,000.

Bred by John O'Connor of Ballylinch Stud, Lady Kaya was an early star for her trainer Sheila Lavery, winning her maiden at the Curragh before finishing runner-up to Skitter Scatter (Scat Daddy) in the G1 Morglare Stud S. At three, she won the Ballylinch-sponsored Priory Belle 1000 Guineas Trial at Leopardstown before finishing a length behind Hermosa (Ire) (Galileo {Ire}) when second in the fillies' Classic at Newmarket. Tragically, that was to be her last race after Lady Kaya suffered a fatal injury in training when being prepared for Royal Ascot. Lavery, standing with Ted Durcan, was underbidder on her sister.

Across the ring from that duo, Coleman was alongside Charlie Fellowes, who trains the G3 Sirenia S. winner Eve Lodge (GB) (Ardad {Ire}) for Mathis Stables.

“Eve Lodge was the first European runner for Bill and Terry Mathis and Bill kindly asked me to find a horse for him here,” said Coleman.

“She'll go to Newmarket to Charlie. Lady Kaya looked very good over seven furlongs at the Curragh and there's a certain race worth €1 million there next year, which will be the aim for this filly.”

“Matt Coleman of Stroud Coleman loved the filly, and he put the two of us together,” said Bill Mathis. “We're absolutely thrilled, and honoured, to be partners with the highly respected Ballylinch team.”

Al Shira'aa Farm recently extended its portfolio when purchasing Meadow Court Stud on the Curragh and to add to the mares already purchased in Europe, the operation signed up a pair of half-sisters to this year's Classic winners Poetic Flare (Ire) (Dawn Approach {Ire}) and Mother Earth (Ire) (Zoffany {Ire}). Both were signed for by Al Shira'aa's representative Kieran Lalor.

The former, lot 120, is a filly from the first crop of U S Navy Flag, who was bred and sold by Clare Castle Stud for €220,000. They bought the dam, Maria Lee (Ire) (Rock Of Gibraltar {Ire}) from Jim Bolger for €65,000 in the year her Classic-winning son was foaled. In addition to Poetic Flare, she is also the dam of dual listed winner Glamorous Approach (Ire) (New Approach {Ire}).

Three lots earlier, Lalor had signed up a filly (lot 117) by another Coolmore first-season sire, Sioux Nation, at €230,000. Consigned by Whitehall Stud for breeder Grenane House Stud, the daughter of Many Colours (GB) (Green Desert) has G2 Premio Dormello winner Night Colours (Ire) (Night Of Thunder {Ire}) as a half-sister along with 1000 Guineas winner Mother Earth.

🌏lot 117 is a half-sister to 1000 Guineas winner Mother Earth and was bought by Al Shira'aa Farm for €230,000 @Goffs1866 Orby. This filly is by first-crop sire Sioux Nation (@coolmorestud) and was consigned by Whitehall Stud. pic.twitter.com/Rjc0GVuu2Q