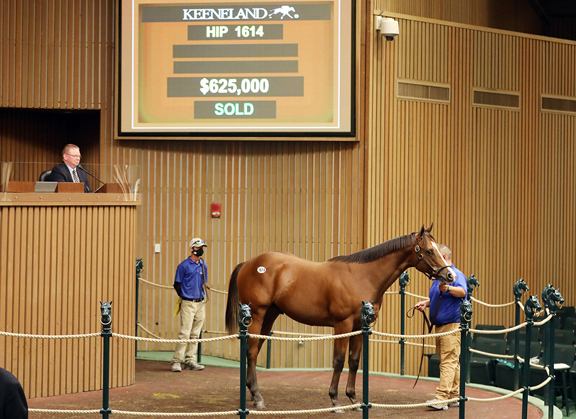 LEXINGTON, KY – The Keeneland September Yearling Sale opened its two-session Book 3 with a day of solid trade Friday in Lexington, with bloodstock agent Mike Ryan making the day's highest bid of $625,000 to acquire a colt by red-hot sire Into Mischief (hip 1614).

“We were shopping all day, and it's the same story,” Ryan said. “If you have what the buyers want, you'll be rewarded. It's simple, but it's unfortunate because there are a lot of nice horses that are probably not bringing what they are worth. It's really selective. If you don't meet the criteria, it's a long road. But the top tier is very solid and there is not much drop off in the top horses.”

Tommy and Wyndee Eastham's Legacy Bloodstock sold Friday's top-priced filly, a daughter of Into Mischief (hip 1253) who sold for $400,000 to Joey Platts.

“The penalties are still high for any vetting, but if you are able to check all the boxes, we've had a good experience and people have wanted the ones who have gone through and checked all the boxes,” Tommy Eastham said. “But it's still a tight market. Yesterday at the barns, we probably were as busy as we have been in a couple of years, even compared to '19, which was a huge year. But now they are putting a budget on the horses, so even if you have nine or 10 scopes, you still need to be careful just because there is a ceiling. But I think there is a fair market.”

Sweetwater Trading Co.'s Kim Lloyd made two purchases during Friday's session and three overall at the auction so far.

“I think the market is surprisingly good for the high-end horses,” Lloyd said. “Horses with great physicals are selling well today, which I expected, but they are selling for more money than I expected. On the other side of that, the horses that don't meet all of the expectations of the buyers are not selling well, if they sell. So, it's still a good market considering our circumstances. Both Fasig and Keeneland have done a great job and everyone should be grateful for their efforts.”

The Keeneland September sale continues through next Friday with sessions beginning daily at 10 a.m.

For the second day in a row, a Keeneland session was topped by a late-selling son of Into Mischief bred by Stonestreet Thoroughbred Holdings as bloodstock agent Mike Ryan made a final bid of $625,000 to acquire hip 1614 on behalf of an undisclosed client in the closing stages of Friday's fifth session of the September sale. Consigned by the Vanlangendonck's Summerfield, the bay colt is out of graded placed True Romance (Yes It's True).

Of the yearling's placement in Book 3, Ryan said, “I think he was well-placed because he stood out, but he would have been a standout physical in any book. Into Mischief is an extraordinary stallion. We haven't seen anything like him in quite some time.”

Barbara Banke's Stonestreet operation purchased True Romance, with this Into Mischief colt in utero, for $350,000 at the 2018 Keeneland November sale. True Romance died in 2019 and this is her only foal.

“He was a colt that just oozed power, speed and stamina and he just happens to be by a sire that really provides that,” said Summerfield's Andrew Vanlangendonck. “It's another Stonestreet-bred and raised horse. With their program, they just keep pushing out one right after the other. And we're very pleased and happy they provided us with these horses.”

During Thursday's session, Peter Leidel made a final phone bid of $1 million to secure an Into Mischief colt out of Teen Pauline (Tapit). Stonestreet also sold the auction's top-priced offering, a $2-million son of Tapit.

A colt by freshman sire Upstart shot to the top of the leader board midway through Friday's fifth session of the Keeneland September sale when bringing a final bid of $410,000 from bloodstock agent Liz Crow. The dark bay yearling (hip 1467) was bred and consigned by Machmer Hall and the Brogdens' operation traces its involvement with the family back three generations. He is the first foal out of Miss Baby Betty (Warrior's Reward), whose unraced dam Baby Betty (El Corredor) produced graded winner Sweet Whiskey (Old Fashioned).

Baby Betty, named after Carrie Brogden's grandmother, briefly left the Machmer Hall band, but was purchased back again for $40,000 at the 2018 Keeneland November sale under the name Machmer Hall – Coming Home.

“We sold Baby Betty when Sweet Whiskey became a graded stakes winner for $400,000 [in 2014] and then when she came back, we bought her back,” Brogden explained. “That's where 'Coming Home' came from.”

Brogden's mother Sandy Fubini added, “My mom's been gone a long time, but she was such a special woman. Her maiden name was Machmer and my grandfather had Machmer Hall named after him, so the whole farm goes back to them.”

From his first crop to race, Airdrie Stud's Upstart has been represented by 10 winners to date, including GI Runhappy Hopeful S. runner-up and 'TDN Rising Star' Reinvestment Risk.

“When Airdrie called me about standing Upstart at stud, I begged and pleaded for a share, so they let us buy a share in him,” Brogden said. “And this mare was bred on that share. I just think Upstart has it all. Every single one I've had has had tremendous brains, they have bone, they have soundness.”

Brogden knew she had something special with her Upstart colt early on.

Platts Gets His Into Mischief

Joey Platts came to Keeneland with an eye towards buying a yearling filly by Into Mischief and, while the competition was fierce in Books 1 and 2, the Wyoming native was able to add a youngster by the in-demand Spendthrift stallion early in Friday's first Book 3 session. Platts, bidding in the back show ring alongside trainer Phil D'Amato, paid $400,000 to acquire hip 1253.

“It seems like every time I watch TVG there are three or four Into Mischiefs that win all over the country,” Platts said. “I've got one now [Mischiefs Model] that ran the other day at Laurel first out and ran second. That's what I came here looking for, an Into Mischief. We finally got a decent one, we hope.”

Of the filly's final price, Platts said, “It was a bargain compared to the prior three or four days of the sale. I've been here since day one. The ones I liked were hard to buy. I was on the two that went for over a million.”

The bay filly was consigned by Legacy Bloodstock on behalf of her breeder, Spendthrift Farm. B. Wayne Hughes's operation purchased her dam, group-placed Ameristralia (Aus) (Fastnet Rock {Aus}), for $370,800 at the 2014 Inglis Easter Sale. The mare's first foal, a colt by Malibu Moon, sold to trainer John Kimmel for $300,000 at this year's OBS March sale.

“We just liked her, looks like she is going to have some decent scope to her,” Platts said of the individual. “She's a later foal [Apr. 28], so she still has some growing to go. She looked the part, looks like she's got some athletic ability.”

“I have to find three with Becky Thomas to pinhook,” Platts said. “I've got my racing side taken care of, now I'm going to the pinhook side.”

The oil and gas industry executive enjoyed success in that arena with Thomas this year when selling a son of Ghostzapper for $750,000 at the OBS Spring Sale. The colt had been purchased at Keeneland September last year for $250,000.

Bloodstock agent Donato Lanni continued his shopping spree for the SF/Starlight/Madaket partnership, going to $400,000 to acquire a colt by Uncle Mo from the Darby Dan Farm consignment. The yearling was bred by John Oxley, who purchased his dam 'TDN Rising Star' Delightful Mary (Limehouse) for $500,000 as an OBS April juvenile in 2010. Graded stakes-winning Delightful Mary was third in that year's GI Breeders' Cup Juvenile Fillies and was named Canada's champion 2-year-old filly.

“He was a cool dude, super chill and classy,” Lanni said of the colt, who he said reminded him of GIII Los Alamitos Derby winner Uncle Chuck (Uncle Mo). “He's a neat horse and we were happy to have him.”

The SF/Starlight/Madaket partnership has loaded up on potential stallion prospects this week in Lexington. Through five sessions, the group has purchased 26 yearlings for $10,740,000.

Asked if the absence of major foreign buyers had enabled the partnership to be more active on the results sheets, Lanni said, “Definitely. When you drive up to Keeneland and you don't see those big jumbo jets on the runway across the street, you know you have a shot at buying what you want. We were fortunate that we were able to buy a lot of nice colts for the group.”