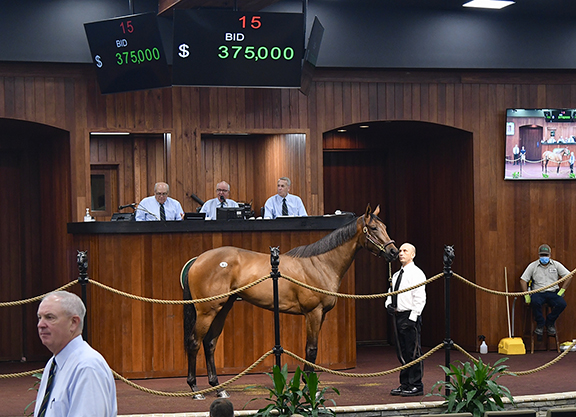 With attendance at the sales grounds down dramatically, but internet bidding brisk, the Ocala Breeders' Sales Company's July 2-Year-Olds and Horses of Racing Age Sale opened with a workmanlike session Tuesday in Central Florida.

“It was a solid start,” said OBS Director of Sales Tod Wojciechowski. “Obviously we had some nice horses go through the ring and sell well. It was a little slow early on in the day, but I thought it leveled out. We are dealing with strange times, that's for sure, certainly the COVID situation is a factor. I think it will get better as we go.”

Just a few hips into the three-day sale, bloodstock agent Donato Lanni secured the session's top-priced lot, going to $375,000 for a daughter of Shackleford from the Coastal Equine consignment. The juvenile was one of 10 to sell for six figures on the day, matching the number from the opening session of the 2019 June sale.

OBS introduced online bidding at its Spring Sale last month and buyers are taking advantage of that platform in greater numbers each day, according to Wojciechowski.

“We saw an uptick even from yesterday to today in the number of online bidding registrations,” said Wojciechowski. “We sold 15 horses online today and the internet was the direct underbidder on 16 horses. Sixty-four different horses were bid on via the internet and we had almost 200 bids that were made via the internet.”

Ocala Stud sold three lots Tuesday, including a colt by Not This Time who was the day's fourth-highest offering. The operation's David O'Farrell said just being able to have a sale was a win.

“I think the fact we are having a sale is paramount,” O'Farrell said. “We sold three horses today and all three have been sold over the internet. I think the internet process has caught on. It certainly could be a lot better. It is a difficult sale, but I am of the belief it could be a whole lot worse.”

The buying bench at the OBS Spring sale was marked by diminished participation from Korean and Puerto Rican interests typically active and a key to strengthening the middle to lower end of the market. Both regions were represented on the results sheets Tuesday, with the Confederacion Hipica de PR, Inc. purchasing 15 lots in the $3,000 to $30,000 range. The Korean-based K.O.I.D., Co. purchased three lots on the day.

The OBS July sale continues through Wednesday with sessions beginning daily at 10 a.m.

The OBS July sale was only minutes old when bloodstock agent  Donato Lanni bid a session-topping $375,000 to acquire a filly by Shackleford (hip 15) on behalf of an undisclosed client. Consigned by Jesse Hoppel's Coastal Equine on behalf of breeder Jim Doyle, the bay filly worked the day's quarter-mile bullet of :20 4/5 during last week's under-tack show.

“She was easy to fall in love with,” Lanni said. “She's pretty awesome. She worked great, galloped out great and she came back from the work great. I knew she was going to cost a little bit because she did everything right. These horses are asked to do a lot–something they've never done before and will never have to do again–but when certain horses do it right, there are going to be fireworks at the end of it. She's one I wanted to get and I'm glad I got her.”

Lanni said a trainer for the filly had yet to be determined.

Hip 15 is out of Peace Queen (Indian Charlie), a half-sister to multiple graded stakes winner Tizaqueena (Tiznow), and one of two broodmares owned by the New York-based Doyle whose brother Larry Doyle owns KatieRich Farms. Jim Doyle purchased the mare for $10,000 at the 2013 Fasig-Tipton New York Fall Mixed Sale. The breeder will offer a filly by Dialed In out of Collusion (hip 542) through the Coastal Equine consignment Wednesday at OBS. @JessMartiniTDN

A filly by Malibu Moon (hip 115) was the second-highest priced offering at OBS Tuesday, selling to bloodstock agent Patti Miller of EQB, Inc. for $350,000. Miller was acting on behalf of an undisclosed client. Consigned by Wavertree Stables on behalf of Joe Minor's JSM Equine, the chestnut filly worked a furlong last week in :10 flat.

“She is just a lovely filly,” Miller said. “She was one that caught my eye the first day. My business partner [Jeff Seder] does the high-speed film analysis and she was just a beautiful mover. And I thought physically she was outstanding. She didn't look like the kind of filly who would go in :10 flat and she kept right on going. She went out in :20 and change. She did it all so well and then just exhaled and walked back to the barn.”

While declining to say which trainer the filly will go to, Miller did say, “She is going to have a very good young trainer who is really up and coming. She is going to the right people which is really rather exciting.”

Miller said she was staying busy in Ocala and taking advantage of a buyer's market.

“I think, where the market was last year, this filly would have been twice that much,” Miller said. “But I think the market is running at 50% or less and there are a lot of nice horses here. I just think it's a good buyer's market at all levels right now. That's why I'm running around like I am.”

Hip 115 is out of Samsational (Unbridled's Song), a half-sister to Grade I winner I Want Revenge (Stephen Got Even). Minor purchased the filly for $125,000 at last year's Fasig-Tipton October Yearling Sale and was originally planning to race the youngster.

“We had her sister last year and really liked her,” said Wavertree's Ciaran Dunne. “This filly had a few niggling little things that made her look like she'd be a better racehorse prospect than a pinhook prospect. So Joe bought her to race. He changed his mind this spring and decided maybe he'd try her at the 2-year-old sales. At that point it was too late to get her in any of the earlier sales, so she ended up here. And the time probably did her the world of good. She's a big filly who probably wants to go two turns at the end of the day.”

Of the decision to work hip 115 a furlong instead of a quarter-mile during last week's under-tack show, Dunne added, “We worked everything eighths because it was so hot, between standing in the chute and everything else, we decided to work everything eighths.” @JessMartiniTDN

Peter Fluor and Kane Weiner's Speedway Stable added a colt by Honor Code to its roster when bloodstock agent Marette Farrell made a final bid of $340,000 to acquire hip 200 from Stori Atchison's Dark Star Thoroughbreds consignment Tuesday in Ocala. The juvenile, who will be trained by Bob Baffert, worked a quarter in :21 2/5 during last week's under-tack show.

“I thought his breeze was flawless,” Farrell said of the dark bay colt. “For a big horse, he was so light on his feet. I went back to the barn pretty much straight away and loved him at the barn. He was so classy and so collected. He just had an air about him that I really liked. They said when they bought him [as a yearling] he was very immature and the time did him well, turned him into a man.”

Of the colt's final price tag, Farrell said, “We were obviously hoping for less, and at one point, I think in the $200,000s, I thought I had him. We were in the back, but someone in the front was quite resilient.”

Atchison was selling the colt on behalf of clients who purchased him for $28,000 at last year's Keeneland September sale.

“I have had him since March,” Atchison said. “Right from the beginning we just knew he was a star, from his presence to his talent and his kindness, he was the whole package. We've always thought he was very special.”

Atchison has been consigning under the Dark Star banner for eight years now and the colt's $340,000 price tag was a high-water mark for the operation.

“I went to work for Ricky Leppala straight out of college and I've been doing this ever since,” she said. “I mostly pinhook my own horses, but I also do a handful of client horses.”

Of her personal best result, Atchison said, “It feels really good. It's a tough market and he jumped through all of the hoops and made everybody money.”

Hip 200 is out of Storm Hearted (Lion Hearted), who was purchased as a 2-year-old by Lee and Susan Searing's CRK Stables for $240,000 at the 2004 Barretts March sale. While the mare was winless in nine starts for the Searings, she is the dam of multiple stakes winner Wake Up Nick (Cindago) and her colt by Curlin sold for $950,000 at the 2017 OBS March sale.

The Searings campaign another son of Honor Code, GI Santa Anita Derby winner Honor A. P., who they purchased for $850,000 at the 2018 Fasig-Tipton Saratoga Yearling Sale. @JessMartiniTDN

Another Not this Time Succeeds at OBS

A filly by Not This Time topped the OBS Spring Sale at $1.35-million and two other surpassed the $500,000 mark. Another member of the young stallion's first crop found success in the OBS sales ring during the July Sale when Hip 103 brought $250,000 from Mike Hall's Breeze Easy Tuesday.

Breezing in :21 1/5 for consignor Ocala Stud, the colt was purchased by Lori and Mark Collinsworth for $62,000 at Keeneland September.

“They are Carlos Martin's clients,” Ocala Stud's David O'Farrell said. “He is new in the business. He is from Texas. This is his first foray into the business. We are every happy with the result. The horse did exceptionally well.”

Bred by Woods Edge Farm, Hip 103 is out of the unraced Cape Town mare Running Creek, who is also responsible for MSW Softly Lit (Latent Heat) and MSP Venice Queen (Latent Heat). The bay colt's second dam is GSW Palliser Bay (Frosty the Snowman), dam of GSW & GISP He Loves Me (Not For Love) and MSW For Kisses (Not For Love).

“Obviously, Not This Time has caught fire during this 2-year-old sales season,” O'Farrell said. “This colt has done extremely well. He was catalogued in March, but he was slightly immature then. With all the uncertainty with COVID-19 starting to happen right before the March sale, we decided to wait on the horse and give him a little time to see how the Coronavirus played out. Fortunately, Not This Time caught fire. COVID-19 stuck around, but the horse did really well and a good horse sells really well. We are really happy for the owner.” —@CDeBernardisTDN