Business is Booming at Norevale Farm 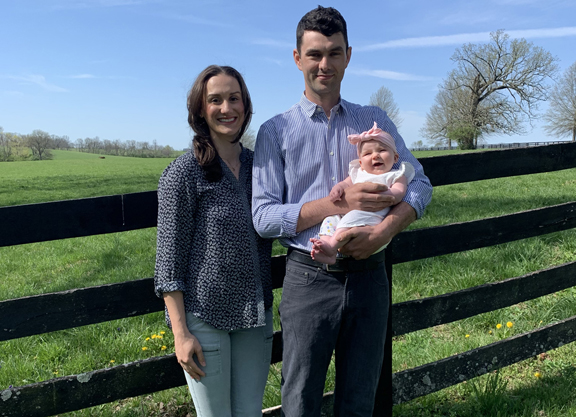 When Leo and Sarah Dooley announced last September that they would be starting their own boarding, quarantine and sales prep operation, they knew there would be a few factors working against them. First and foremost was the pandemic, at a time when the vaccine rollout was still months away. Plus, the couple was expecting to add a third member to their family at the end of the year.

Even so, the Dooleys decided it was the right time to step out on their own, and Norevale Farm was born.

So much, in fact, that they've already outgrown their original 110-acre property along Hume Bedford Pike near Paris and are now one month into leasing out an additional farm down the street.

“Leasing the farm across the road was definitely not expected,” Sarah admitted. “I remember when I was first setting up payroll and the payroll company asked how many employees we were going to have. I said two. They asked, 'Ever any more?' and I said, 'No, no way. We're never going to have more than two employees.' And now we have seven.”

Despite the explosion in growth, the couple still believes they're at a size where they can fulfill their initial vision of a boutique, hands-on atmosphere.

“What I love is the fact that we're not too big,” Leo said. “I can physically touch every horse, every day. We're on top of everything and with being so hands on, we know the horses inside and out and hopefully down the line that starts to show.”

“I think we both have a really great attention to detail,” Sarah added. “We talk to each other every day about everything, so our record keeping is precise and we have good control over everything that goes into the system.”

Growing up on her family's Marula Park Stud located just a few miles from what is now Norevale, Sarah learned the ins and outs of running a successful commercial operation from trailing her parents, Tony and Susan Holmes, around the fall breeding stock sales each year. After graduating from nearby Transylvania University, she traveled around the racing globe to complete the Irish National Stud and Godolphin Flying Start programs. Returning to the States, Sarah worked at Bluewater Sales, Hunter Valley Farm and Lane's End.

While serving as the sales coordinator at Hunter Valley, she met Leo Dooley.

Leo was not from a racing family, but growing up in Kilkenny, Ireland, he caught the bug early and worked for top trainer Jim Bolger as a teenager. He attended University College Dublin while also squeezing in time working at Ballylinch Stud and finding other racing-related jobs across Europe.

“I would take time off college to go and work the sales at Tattersalls and Goffs,” he admitted. “The professors weren't very happy about that, but I learned more there than I might have in the classroom.”

Before graduation, Leo made the journey overseas for a four-month internship with Gerry Dilger. The short time there was so impactful that after obtaining his degree, he came back to the States to work as the broodmare manager at Hunter Valley where he “met his lovely wife.” After four years there, he moved on to a similar position at Indian Creek Farm.

Before the duo ever became a couple, they both knew individually that their end goal would be to someday run their own operation.

“As a couple, that kind of became more realistic and was simmering in the back of our minds for a while down the road,” Sarah said. “Leo is great in terms of the hands-on aspect and I have experience in sales and the admin side of things. I think we both knew that we would work well together and so that gave us confidence to jump when this piece of land came up.”

Initially, the timing seemed a bit premature in their minds, but they took the leap anyways. Now just a few months in, their fast start is a strong indication that they made the right decision.

“We could not have done any of this without the support we've gotten from family, friends and clients,” Sarah said. “The support we've gotten has been huge.  It's hard sometimes, but it's a labor of love. We've been so incredibly busy, but every day we look at each other and we're like, 'Alright, we're doing this. We survived another day.' One hundred percent, we both know we're doing the right thing.”

To add one last variable into the equation, a three-month-old daughter keeps them on their toes, just in case they might have had a moment of spare time otherwise.

“Maeve was born in December right before foaling season,” Sarah said. “She's a huge delight. Leo is going to have a pitchfork in her hands before she can walk.”

“There was a while there where we thought we would have to use her on the farm,” Leo added.

When asked if they ever had any hesitations in taking on a business where they would be working together twenty-four seven, Leo replied, “We did think about that when we started, but it has actually worked out pretty well because I'm spending hours every day on the farm. I'm lucky if I get home for lunch.”

“I think we knew we would work well together from our time at Hunter Valley,” Sarah added. “We complement each other well, we stay out of each other's way and we respect what the other person does.”

“It gives me a lot of confidence, having been in the States for six or seven years now and having worked for three different farms, that I was able to pull bits and pieces from every operation,” Leo continued. “From Dromoland to Hunter Valley to Indian Creek, I was able to pick what I thought would fit best, from reproductive specialists to podiatrists, so it's nice to get all those bits of the puzzle together and hopefully have them all contribute to our ongoing success.” 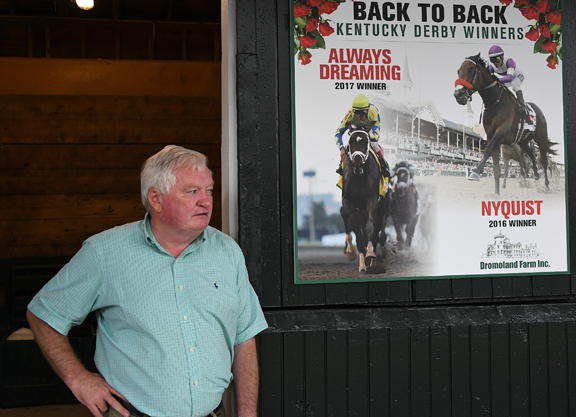 Few were more integral in molding Leo's career than Gerry Dilger. The late breeder and Dromoland Farm owner passed on in March of last year, but he still played a roll in the Dooley's decision to start up Norevale.

“I only worked for Gerry for probably four months, but they were a very impactful four months and probably changed the course of my career,” Leo explained. “I never made a single career decision without consulting Gerry. I do remember, probably three or four years ago, he said something that stuck with me. He said, 'Yeah, you know in five years, hopefully you'll be doing your own thing.' I was very surprised because I didn't think I would do my own thing for another 10, 15 or 20 years. So ultimately when we made the decision on Norevale, which was of course after Gerry's passing, I went back to that [conversation] and because I couldn't ask him, it was nice to know he had backed me all those years ago. It made the decision a lot easier.”

Soon after Norevale opened for business, a second Dilger pupil joined the team. Erin Rogers, also a native of Ireland, had worked with Leo at Ballylinch Stud years ago before traveling abroad to work for Dilger.

“Erin has been a fantastic addition to the team,” Leo said. “It's been great to sort of carry on Gerry's legacy a bit here in a way, since we both worked for him.”

Both Erin and Leo spoke on the powerful influence Dilger had on their careers.

“For me, it was really the confidence he gave me,” Erin said. “He threw me in the deep end and told me to go for it. His knowledge and demeanor made him a good mentor. Everybody just loved him for being him. I never heard anybody say one thing bad about him and it didn't matter who you were, if you were a big owner or someone just starting out, he treated everyone the exact same, which said a lot about his character.”

“He had a huge impact on my life for sure, and on countless others across the globe,” Leo echoed. “He wanted the best for everybody. I'll bet he spent so much of his time thinking about all of his pupils and what they were doing. He just genuinely cared about what was best for people.”

Last fall, an unplaced Bodemeister mare named Bodella was offered in the final days of the Keeneland November Sale as the last of Dilger's mares to go through a sales ring. When she failed to meet her reserve, her consignor Pat Costello called up the Dooleys to see if they might be interested.

“She didn't cost much and she was in foal to Mo Town, so we said sure, mostly for sentimental reasons,” Sarah recalled. “Leo brought her back to the farm and on his way back, he called Erin and told her we had a surprise for her in the back of the trailer.” 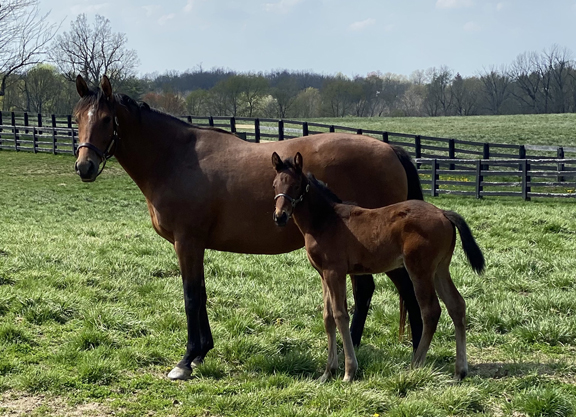 When Erin found the mare waiting to unload, she recognized her instantly from her years spent at Dromoland. The Dooleys offered Erin a partial ownership in Bodella and Erin jumped at the chance.

“It's cool for us to all own a mare together and Erin just loves her,” Sarah said. “She absolutely adores all the horses, but Bodella is the favorite for sure.”

Bodella foaled her Mo Town filly in February this year and has since been bred back to Volatile.

“There was a rainbow one day and Bodella and a couple of mares were in a back field here, and the rainbow ended on top of Bodella,” Sarah recalled. “We were all like, 'Yeah, that's Gerry.' So hopefully he's looking out for us and we'll have a bit of luck with her.”

While both Leo and Sarah acknowledge that luck may have helped all the pieces fall into place when Norevale first got started, they now attribute the farm's ongoing success solely to the support they've received from their clients.

“We're very thankful for all the support we've gotten,” Leo said. “We've got some great clients here and we're excited to grow with them as we continue to develop the program we have here at Norevale.”

“We're always telling each other that there's no resting on laurels,” Sarah said. “We know we've got to keep putting in the groundwork, but we couldn't imagine doing anything else, even on the hard days. I've asked Leo a few times on really busy days, “So, are you glad we're doing this?' And he's like, 'Oh yes, one hundred percent.' And I feel the same way. So we know we're doing the right thing and we couldn't be happier.”