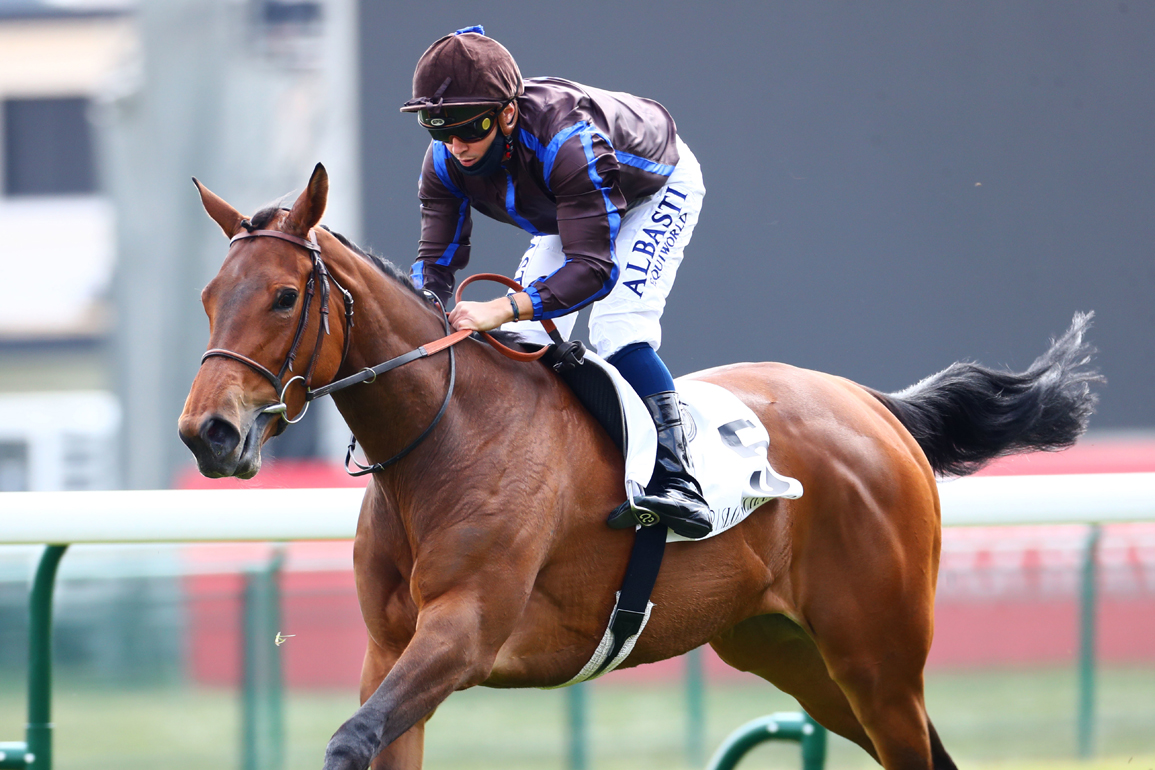 Chantilly on Sunday is the place to be, with the customary high fashion and regalia accompanying a fascinating card featuring the G1 Prix de Diane Longines. As usual, Andre Fabre is the first port of call and it seems at present that his unbeaten Burgarita (GB) (Sea the Stars {Ire}) could be the one to start favourite in a wide-open edition, having impressed with two performances at ParisLongchamp. In the first, Ecurie Ama Zingteam's relative of the 2001 Diane heroine Aquarelliste (Fr) (Danehill) beat the re-opposing Khalidiya (Fr) (Oasis Dream {GB}), while next time she was able to dismiss another who meets her again here in Natsukashi  (Fr) (Motivator {GB}) in the 11-furlong Listed Prix de la Seine May 16. Drawn 14, the bay will have to be every bit as good as she has looked to overcome that handicap.

Khalidiya, who has since beaten the subsequent Listed Prix Melisande scorer Jannah Flower (Ire) (Olympic Glory {Ire}) in a 10-furlong maiden also at ParisLongchamp May 20, bids to provide The Aga Khan with an eighth win in this Classic and has fared well with the draw in six. Trainer Alain de Royer Dupre said, “We've had no problems with her preparation. The filly seems to be in really good shape. We have tried to bring her on in condition with her racing and she is not far off her peak. She has benefited from a similar campaign to [the 1999 winner Daryaba], but they aren't entirely similar fillies. Daryaba was fairly laid-back, whereas Khalidiya is more on her toes and, therefore, far more reactive.”

De Royer Dupre is a master with these types and looks for a seventh renewal, but is wary of testing ground. “To prepare for these big races, I find it easier to handle horses which have previously contested races in which they haven't had to force their talent,” he explained. “Before she saw the racecourse, I really thought she was something special. She was one of my best fillies. Soft ground would be a big disadvantage, as her physique isn't compatible when it comes to acting on muddy tracks. Ground which is too fast could also prove problematic, so good ground would be ideal. She is by Oasis Dream and his progeny aren't reputed to be soft-ground performers. Khalidiya takes after her mother [the 2015 G3 Prix de Royaumont winner Kataniya (Ire) (Raven's Pass)], even if she has more speed than her.”

Fabre's other runner is Godolphin, Ecurie des Monceaux and Ecurie Skymarc Farm's Philomene (Ire) (Dubawi {Ire}), who bids to go one better than her half-sister Chicquita (Ire) (Montjeu {Ire}) who was runner-up to the outstanding Treve (Fr) (Motivator {GB}) in the 2013 renewal. Successful in the G3 Prix Penelope over this trip at Saint-Cloud Apr. 6, she was sixth and beaten under three lengths in the G1 Poule d'Essai des Pouliches at ParisLongchamp May 16 and Godolphin's Lisa-Jane Graffard said, “Philomene comes into this race well and Andre Fabre feels that she has progressed since the Pouliches. The going is a slight question mark, as we would prefer good ground but she is ready to perform well and do her best.”

With Gerard Augustin-Normand's May 24 G1 Prix Saint-Alary winner Incarville (Fr) (Wootton Bassett {GB}) drawn widest of all in 18, she will have to be extra special to defy that and there is a train of thought that suggests that Yeguada Centurion SL's 'TDN Rising Star' Sibila Spain (Ire) (Frankel {GB}) was unlucky not to win that contest. Hampered en route to finishing strongly in fourth, the Christopher Head trainee is also wide in stall 15 and early tactics will be fascinating to witness where she is concerned.

Between Incarville and Sibila Spain in the Saint-Alary was the runner-up Cirona (GB) (Maxios {GB}) and third Es La Vida (Ger) (Soldier Hollow {GB}) and both have leading claims again. Cirona, who was previously successful in the G3 Prix de la Grotte over a mile at ParisLongchamp Apr. 18, represents Ecurie Waldeck and trainer Christophe Ferland is confident. “All lights are flashing green. She is indifferent to the state of the ground. The forecast rainy spell will hold no terrors for her,” he said.

Es La Vida is one of two arrows fired by Francis-Henri Graffard alongside Gemini Stud's Sweet Lady (Fr) (Lope de Vega {Ire}), who was fourth behind Coeursamba (Fr) (The Wow Signal {Ire}) in the Pouliches. “Sweet Lady has had a fair amount of time between races since the Poule d'Essai, which has done her good,” he said. “I will be very happy to try her over a longer trip on Sunday. I think she will relish this, given her style of racing. Regarding the going, I just want it to be safe ground and not too firm, but if the thunderstorms and the rain materialize, it won't bother me, on the contrary. The owner of Es La Vida wishes to tackle the Diane. The filly is fine, so I agreed but with one proviso: it will have to rain. I believe that she's better over 1600 metres, but she is in good shape.”

In the G3 Prix Bertrand du Breuil Longines over a mile, Sabine Goldberg's unbeaten Jin Jin (Ire) (Canford Cliffs {Ire}) bids to defy a penalty for her exploits in the G2 Badener Meile at Dusseldorf May 30. Awaiting her is another with a formidable record in The Aga Khan's Sagamiyra (Fr) (Sea the Moon {Ger}), who comes into this mile contest off a win in the seven-furlong Listed Prix Maurice Zilber at ParisLongchamp May 16. Mikel Delzangles saddles the homebred, who is connected to this week's G2 Norfolk S. winner Perfect Power (Ire) (Ardad {Ire}), and later on the card also puts forward Zak Bloodstock's May 24 G2 Prix Hocquart winner Bubble Gift (Fr) (Nathaniel {Ire}) in the G3 Prix du Lys Longines. This mile-and-a-half contest is a trial for the July 14 G1 Grand Prix de Paris, so Andre Fabre's representatives demand close attention. Fitri Hay, Michael Tabor and Susan Magnier's Tides of War (Ire) (Galileo {Ire}) captured the Coupe des 3 Ans at Lyon-Parilly May 9 and as a full-brother to Deauville (Ire) and The Corsican (Ire) can continue to go places.