Bunglejungleparty The Star at Tattersalls August 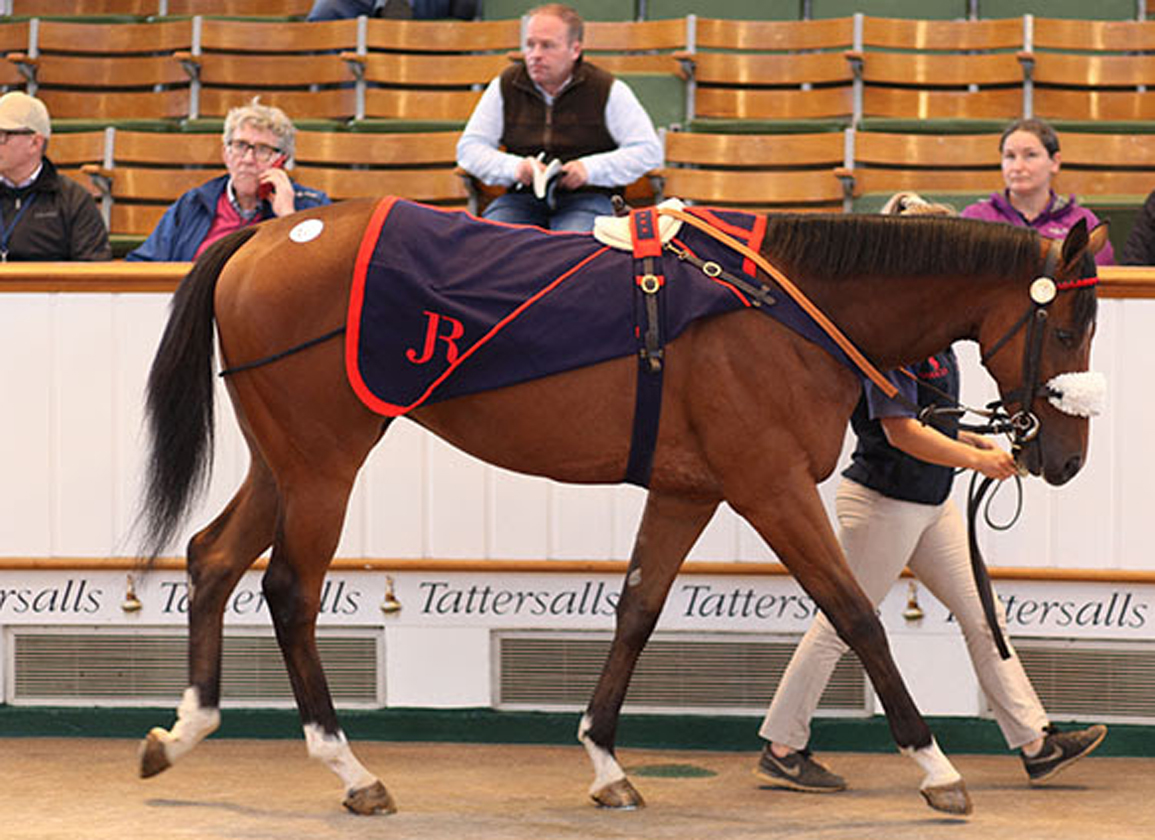 The second year of the Tattersalls August Sale kicked off its run at Park Paddocks in Newmarket on Tuesday. The clearance rate remained solid when compared to the 2020 renewal, which was inaugurated due to the ongoing Covid-19 pandemic.

Leading the way on day one was lot 169, Bunglejungleparty (Ire) (Bungle Inthejungle {GB}), who brought 125,000gns from Will Douglass of Charlie Gordon-Watson Bloodstock. Consigned by Jamie Railton on behalf of Theresa Marnane, the Qatari-bound colt was the first six-figure lot of the sale.

His sire celebrated a first Group 1 scorer with Winter Power (Ire) in the G1 Nunthorpe S. at York earlier this month and the four-time starter appears to be shaping with plenty of promise, having run third in the Listed Prix des Jouvenceaux et des Jouvencelles at Vichy in July.

“I have had luck buying from these connections at last year's sale with Pom Malpic,” said Douglass. “This is just a very nice horse with form. He goes to Qatar.”

“The Marnanes are such enthusiasts, I am so pleased for them,” added Railton. “We are so appreciative of our Qatari bidders. He was a pretty obvious horse and he had an avenue to the US as well as he is a non-winner. We are so appreciative of all these people coming to Tattersalls to buy horses. This sale suits every single jurisdiction in the world to buy horses so we must strive to support it.”

Marnane said of the €12,000 Goffs Autumn Online Sale yearling, “I am over the moon. He is a very good-looking horse, big and strong, everybody wanted him today. He had clean X-rays and a very good scope, and there were three people on him over 100,000gns.”

She added, “We rolled the dice here. He was entered in a Group 3 in Germany this weekend, but the yearling sales are coming up.

“We sold Will a very good horse last year, who has been stakes placed in Qatar; he knows where to get the good ones from.

“This date works in the calendar, the sale companies are doing a great job to get these horse sold and we are looking forward to the yearling sale next week.”

“He is a little under the handicap mark, but we think he will go well in Bahrain and hopefully he will improve,” said Majeed, who is eyeing the lucrative Bahrain Turf Series for the winning 3-year-old gelding. “He is for Sheikh Sultan and we are looking forward to running him. We hope this will be a nice horse.”

Bred and raced by The Queen and trainer Roger Charlton, Encourage is a winner over 10 furlongs. The bay is out of a winning half-sister to G1 Queen Elizabeth S. hero Kingdom of Fife (GB) (Kingmambo), Group 3-placed Four Winds (GB) (Red Ransom), and the dam of stakes winner and G3 Prix Eclipse third Royal Spring (Fr) (Tamayuz {GB}).

National Hunt racing is next on the cards for Dirham Emirati (Ire) (Vadamos {Fr}), who caught the eye of Phil Middleton. Mick Sheridan placed the winning bid of 62,000gns for Middleton, who missed Dirham Emirati's time in the ring due to heavy traffic.

“Phil has been very keen on this horse for a while, he has watched all his runs,” said Sheridan. “Phil's got a keen eye for a jumper and that is the plan–but he will [give] the horse a bit of time off first. He should go with a bit of cut in the ground.”

Added Sheridan of his temporarily stranded friend, “I am very good friends with Phil, we were involved in Arab racing together. He rang me when he got stuck in the traffic two hours ago, and then rang me an hour later when he had not moved.”

“There is one mare in India and one mare in Australia, so apart from those, we have nearly all the family's breeding mares at home, and they are all “Glamorous,'” said Bailey who bid through Jason Singh over the telephone and was not opposed to renaming his new acquisition.

“There was no need for me to come up to Newmarket as she was the one I wanted–we have done all the checks we needed,” Bailey added from his Chepstow base. “She will go into training for a couple of years with Chris Mason and we will try and improve her form and then she will come back to the farm.”

The sale continues with another 230 lots at 11 a.m. on Wednesday.