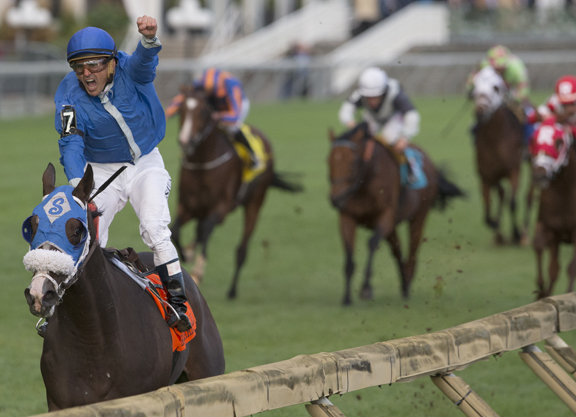 Trainer Tim Glyshaw has had a bittersweet 2017, but the sweet is absolutely saccharine right now and the 48-year-old proud Indiana University alum is heading to the Breeders' Cup with his first two starters. While GI Breeders' Cup Turf Sprint-bound Bucchero (Kantharos) was already slated to head to Del Mar for the World Championships, it was not until the morning of Oct. 19 that a definitive decision had been made on barn star and Woodbine romper Bullards Alley (Flower Alley).

Each horse exits a big victory against their respective divisions within eight days of one another. Ironhorse Racing Stable's Indiana-bred Bucchero was a 26-1 handy 1 3/4-length winner of the GII Woodford S. Oct. 7 at Keeneland, while Bullards Alley gave Glyshaw his biggest career victory Oct. 15 taking the GI Pattison Canadian International by 10 3/4 lengths at 42-1 for owners Wayne Spalding and Faron McCubbins. After debating for a few days following such a huge performance, Glyshaw was pleased to move forward to the GI Breeders' Cup Turf with the latter.

“He's in the best form of his career right now and it was either run in the Breeders' Cup or the Red Smith at Aqueduct,” Glyshaw said. “You may never get an opportunity like this again and I'm not completely certain he can't run that same race back. I know the numbers guys may disagree, but this horse runs hard every time and if he runs anywhere close to that, he will be competitive. If his best effort puts him third, fifth or seventh, I'll be happy, as long as it's his best.

“I know the history on him says he's best on softer turf courses, but I believe he could have won if he was not impeded badly in the (GIII) American St. Leger (at Arlington) on firm ground,” he continued. “He just needs a softer pace earlier, so he can be within range. On firm turf, sometimes they run off and he is too far behind, which isn't the way he naturally runs. He's had plenty of excuses and some bad luck, but that's turf racing. It all worked out at Woodbine and he ran big. Eurico (Rosa Da Silva) rode a beautiful race and kept him to task, as he can get to waiting on horses, which is why he won by as far as he did. He came out great and he's definitely a better horse this year than last year.”

Bullards Alley, an $11,000 bargain from the 2014 Eugene Melnyk dispersal at Fasig-Tipton, is back at Churchill Downs. Bucchero, on the other hand, is with Glyshaw's Indiana Grand string and worked four furlongs in :52.80 Friday.

“It'll be a nice slow work by design for him,” Glyshaw said. “We know he's fast, so he doesn't have to show it in the morning. He really likes it up in Indiana and that's where his exercise rider is, so I don't want to change anything with him.

“He would have been a turf sprinter his whole career if he didn't have the “IN” next to his name,” Glyshaw continued. “He has taken advantage of the Indiana-bred program and done really well. He's won four stakes on the dirt against them, but he is a better horse on the grass and showed that. I know there are better horses in the country, but if you're looking at Del Mar and the way he can sit behind the speed and make a big run, I'll take my chances with my horse. He has never had a physical issue in his life and beat some very good horses.”

A pair of big chances in the Breeders' Cup is a welcome panacea for former school teacher and assistant to Bob Holthus and Cole Norman. He and wife/assistant Natalie, daughter of legendary Louisiana jockey Ron Ardoin (5,226 wins), weathered a tough winter at the Fair Grounds in which they only won three races from 77 tries, but finished second 12 times. A trip back west could also heal the woulds of 2013, when an in-form Taptowne (Tapit) was a vet scratch with a bruised hoof the morning of the 2013 Breeders' Cup Dirt Mile.

“This definitely makes up for the winter we had and the tough year so far,” he said. “We just got unlucky over and over and this definitely helps. It'll be nice to get back there, especially after Taptowne. We were really excited and don't get me wrong–I am glad the veterinarian was doing their job–it just was heartbreaking when a horse is doing that well and can't run in such a big race.

“It's great to have these two barn favorites going to the Breeders' Cup,” Glyshaw concluded. “They both deserve the chance and have always had the talent and they're both honest horses for great owners who love the game. Things have turned around and it's really a great feeling.”