Buick Opts For Master of the Seas in Guineas 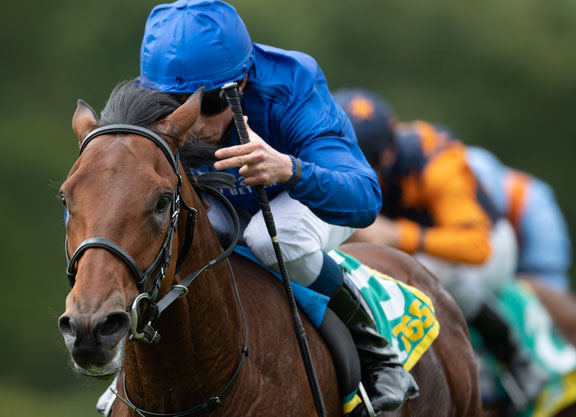 Master of the Seas | Racingfotos.com

Jockey William Buick has decided to ride G3 Craven S. hero Master of the Seas (Ire) (Dubawi {Ire}) in the G1 QIPCO 2000 Guineas on May 1, Godolphin announced. Godolphin's retained jockey opted for the G2 Superlative S. hero, instead of One Ruler (Ire) (Dubawi {Ire}), who will be the mount of James Doyle. The latter has not raced since running second in the G1 Vertem Futurity Trophy S. in October.

“Five days out from the Guineas, I couldn't be happier with them,” said trainer Charlie Appleby, who also has stakes-winner and three-time Group 3-placed Naval Crown (GB) (Dubawi {Ire}) entered in the first Classic of the UK season, on the Godolphin website. “One Ruler has been progressing nicely at home, while Master Of The Seas has gone to the races and put the score on the board.

“It wasn't an easy call for William, who rode Master Of The Seas in the Craven and then sat on One Ruler in a routine gallop at Moulton Paddocks last week.

“William asked some serious questions of Master Of The Seas in his race, and he was pleased with the response. I believed that's what clinched it in the end. Of course, the final call comes at declaration time on Thursday.”

One Ruler will be making his 3-year-old bow in the Guineas and won the G3 Autumn S. over the Rowley Mile last October.

“Things have also gone well with One Ruler,” Appleby added. “He is well in himself, and his work has been pleasing.

“Kieren Fallon, who has been riding him all winter, took him for a routine gallop at Moulton Paddocks on Saturday, and he was pleased. Kieren won the Guineas five times, so it's great to have a rider with that experience on the team.”

Other Godolphin Classic aspirants have had their next starts mapped out as well. Craven second and 'TDN Rising Star' La Barossa (Ire) (Lope de Vega {Ire}) is being aimed at the G1 French 2000 Guineas on May 16.

“He has done well since the Craven, and it is best to put a line though his previous run in France in the G1 Criterium International at Saint-Cloud [when fifth, beaten six and a quarter lengths]. He did not like the heavy ground.”

Unbeaten Hurricane Lane (Ire) (Frankel {GB}), who has won a novice at Newmarket last October and a 10-furlong Newbury contest on Apr. 16, will target the G2 Dante S. at York on May 13. G3 Sandown Classic Trial second and third Adayar (Ire) (Frankel {GB}) and Yibir (GB) (Dubawi {Ire}), will head to the Lingfield Derby Trial or Dante and the Chester Vase, respectively.

“We are very encouraged by the signs so far and excited with what we have,” Appleby said of his 3-year-old Classic prospects. “We are always looking for the next 3-year-old champion, and we are very happy the way this group are developing.

“The Dante is usually a very good trial for the Derby, and Hurricane Lane is worthy of having a crack at it. On all evidence so far, Adayar is going to appreciate stepping up in trip, which could be in the Lingfield Derby Trial. But he doesn't want the ground too quick, so he has the Dante at York as alternative.

“I was very pleased with Yabir's seasonal debut. He is only going to get better when he gets to a mile and a half, which he will get in the Chester Vase, his next race.

“I also plan to send Wirko (Ger) (Kingman {GB}) [Epsom's Listed Blue Riband Trial winner] to Chester for the Dee S. It will be more good experience for him. The Epsom race was a 'Win and You're In' for the Derby–we already know he can handle the track.”