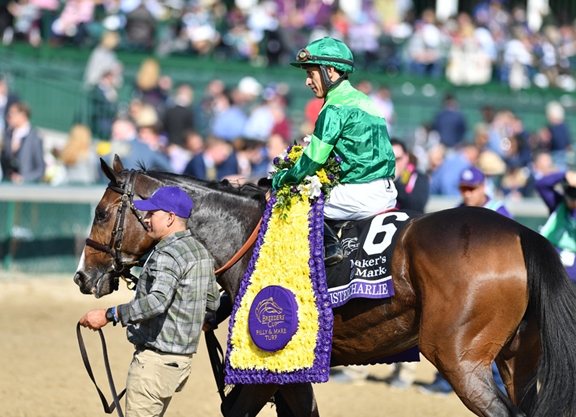 LOUISVILLE, Kentucky–Chad Brown saddled five horses in Saturday's GI Maker's Mark Breeders' Cup F/M Turf, and the adage “strength in numbers” proved accurate as Peter Brant's Sistercharlie (Ire) (Myboycharlie {Ire}) out-kicked favored European invader Wild Illusion (GB) (Dubawi {Ire}) and her stablemate A Raving Beauty (Ger) (Mastercraftsman {Ire}) to provide Brown with a record fourth victory in this event. After a start delayed by the acting-up Wild Illusion–who entered with imposing form and back-to-back victories in the G1 Nassau S. and G1 Prix de l'Opera–Sistercharlie settled in midpack off the inside behind A Raving Beauty, who more or less inherited the lead when the Brant co-owned Thais (Fr) (Rio de La Plata) missed the break and failed to take up her spot as the intended pacemaker. After doling out moderate fractions over soft conditions, A Raving Beauty spun for home still going well despite questions about her ability to get this 1 3/8-mile distance. But Sistercharlie and Wild Illusion were starting to produce their runs down the center of the course. They continued to bear down on the pacesetter as the line loomed, and Sistercharlie had the most to give as she got up by a neck over the top.

“We broke well and got a good position,” said winning Hall of Fame pilot John Velazquez, who was celebrating his 16th Breeders' Cup win (behind only Mike Smith with 26). “They kind of bunched up in there to get to the first turn and then everyone started to crowd up because the pace wasn't very fast. I liked where I was. She relaxed well where I was and was moving well past the wire for the first time. From there I just bided my time with her. I followed [Wild Illusion] and she won.”

Charlie Appleby, who had saddled fellow Godolphin colorbearer Line of Duty (Ire) (Galileo {Ire}) to victory in Friday's GI Breeders' Cup Juvenile Turf, was pleased with his charge's effort: “I'm delighted with her run. She's run a fantastic race and has lost nothing in defeat. Coming into the race we felt that Chad's filly (Sistercharlie) was the one we all had to beat, so full credit to him and his team on their win. Our horse is a consistent Grade I performer, but I feel one mile and two furlongs is really her ideal trip. All three of mine have performed this weekend, so I'm delighted with how everything has gone.”

Chad Brown, still only 39, is now tied for third all time with the Aidan O'Brien with 12 Breeders' Cup wins.

“[Velazquez] showed once again why he's one of the all-time great riders,” Brown said. “And he was aboard one of the great fillies that I've trained, for sure, up to this point. And I just want to say that she ranks way up there, especially in terms of her heart. This horse, when you watch the replay, she really lunges at the wire, I don't think like any horse I've ever seen. She knows exactly where the wire is and if she's anywhere close to that lead near the wire she's going to win.”

She had a serious bout with pneumonia after that, but resurfaced in June's G2 New York S. to be a close second to another Brown trainee in F/M Turf seventh Fourstar Crook (Freud). The bay got her nose down on the line in the GI Diana S. July 21, and had been off since besting Fourstarcrook in the GI Beverly D. S. at Arlington Aug. 11. Thais completed a Brown trainee trifecta that day.

Peter Brant, chairman and CEO of White Birch Paper Company, was one of racing's most prominent owners of the 80s and early 90s. He took the 1988 GI Breeders' Cup Sprint under the Twin Spires with Gulch, but left racing in 1994 to pursue other interests, including polo. He reemerged in 2017 and has once again become a major player in the bloodstock market purchasing, for example, 12 yearlings for $7.065 million solely or in partnership at this year's Keeneland September sale.

“I left in 1994 and I was very fortunate to be with a lot of great people in the sport at that time for a period of 20 years and they taught me a lot. And I always tried to work hard to study about the breeding and the racing and watch what a lot of the great trainers, how they campaigned their horses… So coming back now I learned so much back then it really helped me, specifically not to make some of the mistakes that I had made. And of course you're going to always make mistakes in a game like this because so much of it has to do with–you have to have good fortune. And I see that the game has changed somewhat and you try to make the necessary changes in your program to do that, and I think first and foremost was to associate with Chad, who is a great trainer and focused on his stable and his operation and spending a lot of time with him I see it so clearly. He's a really great trainer and one of the greats ever.”

Brant said that prominent owner/breeder Joe Allen of War Front fame was part of what inspired him to who get back into racing–as was American Pharoah's 2015 Triple Crown run.

“I went out for the Triple Crown with my son Chris,” Brant recalled. “I just had a feeling [American Pharoah] was going to win that day at Belmont, and we saw a lot of people that we knew and I just felt like, 'Wow, this horse, after so many years won the Triple Crown and that kind of inspired me to get back in.”

Sistercharlie is the first Breeders' Cup winner for Myboycharlie. She is out of a placed daughter of 2000 GI Del Mar Oaks third placegetter Premiere Creation, the dam of GSW & MGI/G1SP Anabaa's Creation (Ire) (Anabaa) and second dam of SW Create A Dream (Oasis Dream {GB}) and also responsible for GSW Leo's Starlet (Ire) (Galileo {Ire}). The winner is kin to the 2-year-old Sottsass (Fr) (Siyouni {Fr}), a €340,000 Arqana August Yearling Sale who broke his maiden for Brant and Jean-Claude Rouget in France last week. Sistercharlie also has a yearling half-brother by Charm Spirit (Ire)–purchased for €400,000 at this year's August sale by Michel Zerolo's Oceanic Bloodstock, which also bought Sottsass, and a colt foal by Fastnet Rock (Aus).