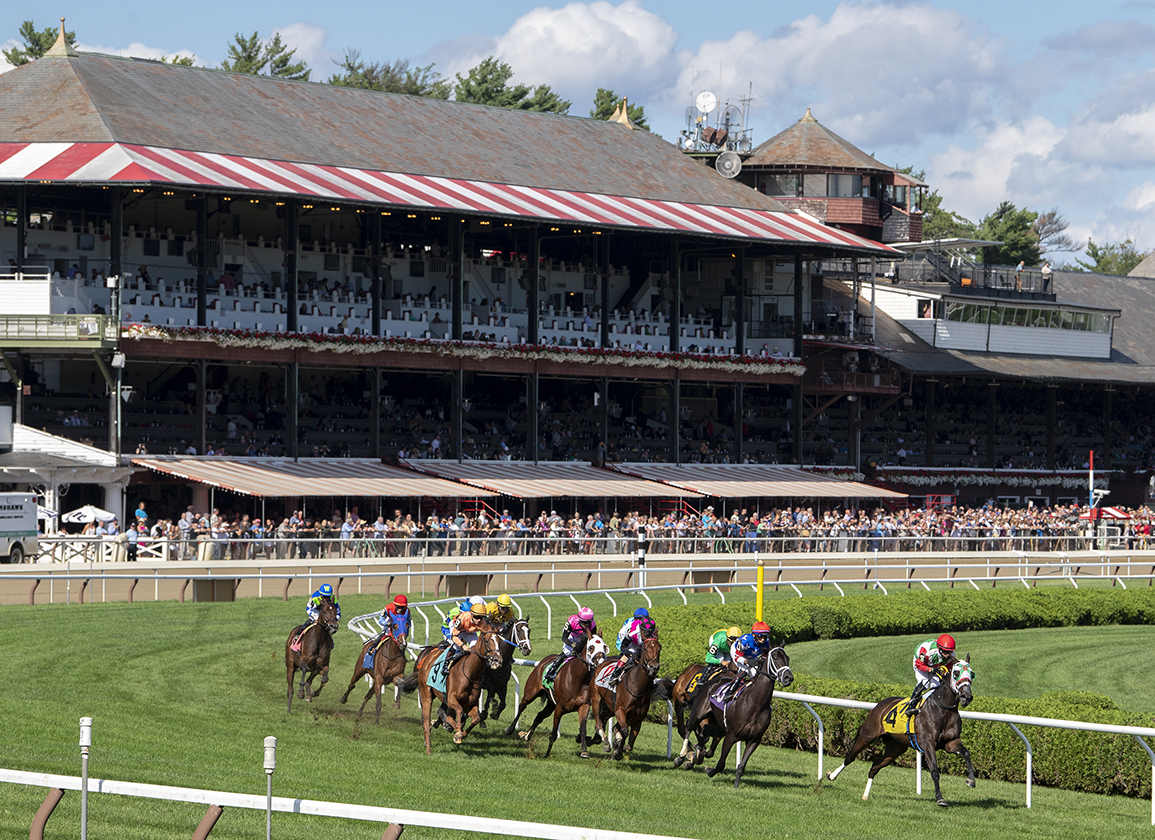 “Happy to have everybody back at the meet. That was the big thing,” Brown said. “The most rewarding part of the meet was having everybody back. Last year, win or lose, it just wasn't any fun. I can speak for me and a lot of people around me that it just wasn't any fun. To have everybody back and to see people you haven't seen in two years, family and friends–a lot of times you only see them at Saratoga–that's really been the best part of the meet.”

Despite being challenged by trying weather with rain in July and many hot, humid days in August, the 153rd season of racing was a record-smashing financial success with total handle surpassing $800 million for the first time. America's oldest and most popular racetrack was alive again for 40 days of top-level racing and from the first week, bettors embraced the Saratoga product served up by the New York Racing Association. By the 36th day Sept. 1, the all-sources handle record of $705 million set during the 39-day pre-pandemic meet in 2019 had been surpassed. Even though 45 races were moved off the turf because of wet conditions, the meet ended with all-sources handle of $815,508,063, a 15.6% increase.

“I think it went great,” said NYRA president and CEO David O'Rourke. “Coming out of a year like last year to be able to run the meet–for lack of a better term–in a normal fashion, it was amazing. I think the numbers speak for themselves. The fans came out. The town was packed.”

Jason Fitch, a co-owner of King's Tavern, located across Union Avenue from the main gate, said business was very strong.

“The track this year for King's has been amazing,” Fitch said. “It was, by far, our best season yet. This was our seventh season; well, if you want to count last year.”

Due to COVID-19 restrictions, the 2020 season was conducted in front of empty stands. Saratoga as a television event was popular, generating $702 million in all-sources handle, but there was zero excitement on the grounds. That changed this summer, and Saratoga Race Course was very much its old self. NYRA said that the daily average attendance was 26,162 and the total attendance surpassed 1 million for the sixth consecutive season, excluding 2020.

“I think it was a sigh of relief that people came back and were as enthusiastic as they are,” said Hall of Fame trainer Bill Mott. “I'm delighted. I couldn't be happier. It was so damn boring last year. I thought I was going to go to sleep at the races. You love to have the fans and the excitement. I do anyway.”

It was a memorable summer at the Spa for trainer Todd Pletcher, who was inducted into the Hall of Fame on Aug. 6, fell sick with COVID-19 despite being vaccinated and ended up second in the standings with 31 wins, 10 behind Brown. Pletcher said he welcomed the return of a familiar, comfortable Saratoga season.

“It's great to see an environment like here where you have a lot of people coming to the races and enthusiastic about it,” he said. “That's one of the great things about Saratoga. It's one of the venues where you still get that on-track attendance. We go back to Belmont and Aqueduct and it's not the same feeling because people aren't there.”

“This is a tough spot, so winning this title is everything,” Saez said. “To win the Travers; racing at NYRA is the biggest deal right now, and we're so blessed to be here. It means a lot.”

Saez credited his agent, the former trainer Kiaran McLaughlin, for helping him secure the title.

“You see how tough it is to win a race here. To win 64 races here, it's wonderful,” Saez said. “I'm so thankful to the trainers and thanks to Kiaran, who did a great job. Nothing is impossible. We came here and were patient and rode our horses to win, and we did it. We're so happy to be here.”

Seth Klarman's Klaravich Stables led all owners with 21 wins for its fourth straight title. Klaravich had eight more wins than runner-up Michael Dubb. It was one win shy of the Saratoga single-meet owner record of 22 wins set by Kenneth and Sarah Ramsey in 2013.

Hall of Fame trainer Steve Asmussen became the career leader in wins by a Thoroughbred trainer Aug. 7 with his 9,446th victory in the fifth race on the Whitney Day program. Asmussen finished the Saratoga season in impressive fashion, winning three Grade I races on the final weekend. He won the first running at Saratoga of the GI Jockey Club Gold Cup with Max Player (Honor Code) Saturday, the GI Spinaway S. with Echo Zulu (Gun Runner) Sunday and the GI Hopeful S. with Gunite (Gun Runner) on the closing day card Monday. Asmussen also won two other Grade I races: the Forego with Yaupon (Uncle Mo) and the H. Allen Jerkens with Jackie's Warrior (Maclean's Music).

Brad Cox, the 2020 Eclipse Award-winning trainer, finished seventh in the standings with 13 victories, but two of those wins were in Saratoga's highest-profile Grade I races. Cox captured the Whitney with Knicks Go (Paynter) and three weeks later his other gray star, Essential Quality, prevailed in the 152nd Travers. Cox is the third trainer to win both races in the same season.

Brown grew up in nearby Mechanicville and learned the sport at Saratoga. He was the runner-up in the trainer's standings for five years before claiming his first title in 2016. He won again in 2018 with a record 46 wins and repeated in 2019. He won five Saratoga graded stakes in 2021, including three Grade II contests. With five wins from five starters Aug. 25 and three more the next day, Brown climbed to the top of the standings.

“I'm just so appreciative. It's probably one of the most rewarding of the meets we've won because we had a lot of things to overcome,” Brown said. “We had a terrible, terrible virus running through our barn since we arrived from Florida. It really took a lot of horses out of commission. Then we started the meet off slow. A lot of seconds. A lot of rain. By mid-meet it didn't look like we were going to get anywhere near 40 wins.”

Brown said he and his staff stayed focused and success followed.

“Then things just started coming together,” he said. “The weather cleared up. Seconds turned into wins. We had a lot of good fortune with racing luck and you can make up a lot of wins fast if you get on a roll. We certainly did Travers week.”

Fitch said he was taken by a very positive, wholly different vibe this summer at the two businesses he operates with his brothers, King's and the Saratoga City Tavern downtown on Caroline Street.

“It was night and day,” he said. “It's hard to describe it, but I think in previous years everyone was just going through motions. The whole pandemic put a light on what to appreciate in life and I think people just appreciated what we have in our backyard more.”