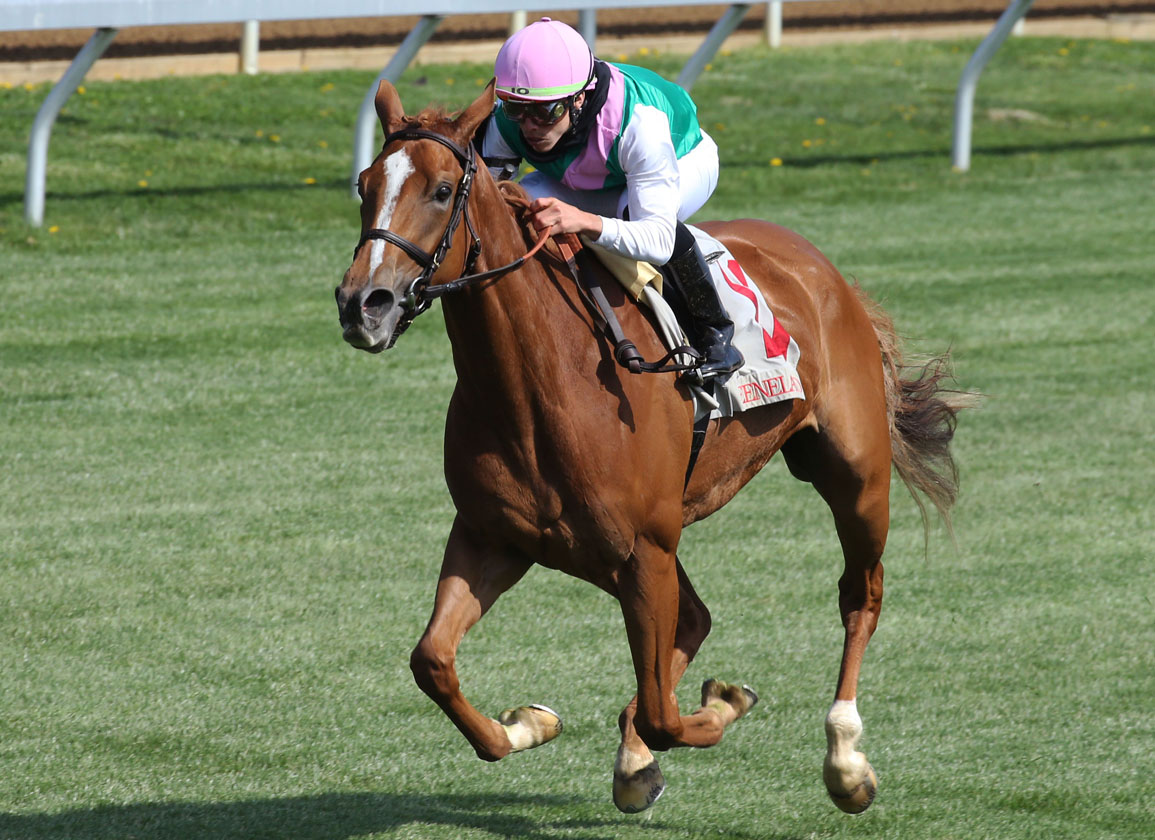 Pocket Square won an April allowance at Keeneland in her U.S. debut   Coady

One of these years, the New York Racing Association (NYRA) may have to switch the name of the GI Diana S. to the Chad Brown.

With five straight victories, six wins overall and 17 in-the-money finishes since he saddled his first runner in the race in 2009, Brown has, well, dominated the 1 1/8 mile race for fillies and mares on the inner turf course. Brown will try to extend his unprecedented Saratoga graded-stakes streak Saturday with a pair of runners, Juddmonte's Pocket Square (GB) (Night of Thunder {Ire}) and Peter Brant's Lemista (Ire) (Raven's Pass) in the first of 20 Grade I races to be contested at Saratoga this summer. They are part of the proven group of stakes horses that includes the Godolphin pair, Athiqua (GB) (Dark Angel {Ire}) and Summer Romance (Ire) (Kingman {GB}), who finished one-two in the GI Just A Game S. at Belmont Park June 5.

While a number of trainers have won some of Saratoga's graded stakes multiple times, Brown's streak in a Grade I stands alone. The closest is Hall of Famer Jonathan Sheppard, who won the GI New York Turf Writers Cup H. steeplechase four years in a row, from 1989-1992. The race has been renamed in Sheppard's honor this year. Leo O'Brien, the father-in-law of Hall of Fame jockey John Velazquez, won the ungraded Yaddo S., for New York-bred fillies and mares, five consecutive times, from 1991-1995. Irish Linnet (Seattle Song) did the work for O'Brien in the streak with five straight wins.

After a five-year run as an assistant to Hall of Fame trainer Bobby Frankel, Brown launched his own stable in November 2007. His first Grade I came at Saratoga Race Course, his home track in his youth, in the 2011 Diana with Zagora (Fr) (Green Tune). He said Frankel regarded the Diana–which he won twice–as one of American's high-end top turf races and he does, too.

“It's been a special race. Ever since then we've really pointed toward it,” Brown said. “And we had the right horses a lot of the years.”

Indeed. Brown has entered the race for 12 consecutive years and has had at least one horse in the top three of the Diana since Zagora's victory. His win streak started with Dacita (Scat Daddy) in 2016 and he followed up with Lady Eli (Divine Park) in 2017. Brant's Sistercharlie (Ire) (Myboycharlie {Ire}) took the 2018 and 2019 editions and Rushing Fall (More Than Ready) won last year.

“We've had tremendous success in the race with so many talented fillies through the years that we've had the opportunity to work with. All a little different,” Brown said. “It's a remarkable record, a lot of credit to my team and to the horses. It's a tough race. There's been no Dianas in that group that we've won that have been easy. We're bringing two nice prospects into the race. We'll have to see if we can keep it going.”

Lemista won a pair of group races in Ireland last year and was beaten a half-length in her lone start for Brown, the GIII Beaugay S. May 8. Pocket Square, who was also imported from Europe this season, finished fifth as the 5-2 favorite in the Just A Game.

Brown said the possibility of soft ground is a worry. There has been a lot of rain in upstate New York this month and more is in the forecast Saturday. The courses were rated “good” for Thursday's opening day program.

“It's concerning. It's definitely concerning,” Brown said. “I'd rather the turf be firmer for my horses. I think they can handle it. Lemista shows in her form that she could possibly handle it back home. We thought that Pocket Square could, but she didn't run well on soft turf in the Just A Game, so I'm concerned.”

Brown said a couple of factors might have contributed to her performance in the Just A Game.

“The soft turf, but she did run well back in Europe on the soft. So that was confusing,” Brown said. “She did miss her final work for the race because the rain came in. I was able to get some of the horses worked. On her schedule, it hit at exactly the wrong time to get her final breeze.

“So, she actually missed her last work. I didn't think it would affect her because she'd been training so strong in the weeks prior, but it might've. It probably did. So maybe it was more the work than the ground. I'm hoping, but we'll see.”

Brown said the Diana streak is a positive that he is enjoying.

“I don't really feel pressure so much, but more of I look forward to it,” he said. “I look forward to the challenge of keeping the streak going and maybe setting the bar very high for that race.”