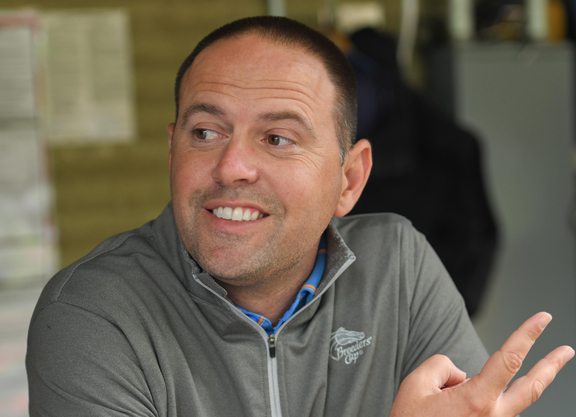 SARATOGA SPRINGS, N.Y. – In what is a very good summer in another strong year, Saturday, August 11, 2018 was a day of days for trainer Chad Brown. Not only did he complete the GI Arlington Million-GI Beverly D. S. double for the second consecutive year at Arlington Park, Brown saddled the first three finishers in the Beverly D, ran 1-2 in the Million and finished second in the GI Secretariat S. with Analyze It (Point of Entry).

While Sistercharlie (Ire) (Myboycharlie {Ire}) was taking the Beverly D. over stablemates Fourstar Crook (Freud) and Thais (Fr) (Rio de lLa Pata), and Robert Bruce (Chi) (Fast Company {Ire}) was winning the Arlington Million over Almanaar (GB) (Dubawi {Ire}), Brown’s stable was having yet another very good day at Saratoga, where he is on a record-breaking pace, with three wins and two seconds from eight starters. For the day at Arlington, Monmouth Park and Saratoga, Brown had six wins, six seconds and two thirds from 19 starters. That’s a win rate of 31.57% and an in-the-money performance of 73.68%. The purse earnings for the day of $1,648,010 would rank 52nd on the 2018 national trainer’s list through Monday.

Brown, 39, has been the leading turf trainer in the U.S. for several years and is a force on the Arlington Million program. His third victory in the Million tied the record shared by Hall of Famers Charlie Whittingham and Ron McAnally and his fifth Beverly D. and fourth in a row are records. In 2015, Brown became the first trainer to saddle the top two finishers in the Beverly. He did it again last year and managed to improve on it by sweeping the top three places in the nine-horse field. Then he produced the exacta in the Million.

“It was a really incredible day. It came together in the right way,” Brown said. “Nearly all of our horses ran well. It’s a very fortunate position to be in. I’m very proud of our day.”

While hitting the board with six of eight starters in the three Grade I races would have been an overly optimistic projection, Brown’s continued success at Arlington was not shocking. In the Million, Robert Bruce was the 5-2 second choice and Almanaar was the 7-2 third choice behind Oscar Performance (Kitten’s Joy), who was pulled up and vanned off after taking what jockey Jose Ortiz felt was a bad step. Sistercharlie was the 8-5 favorite in the Beverly D and Analyze It was the 4-5 favorite in the Secretariat.

“We went out there with some really good horses,” Brown said at Saratoga. “Their training went well. A little bit of dodging weather over here wasn’t easy. It took a lot of teamwork, a lot of concentration by everybody, but we got it done. When we actually got them to Arlington and settled in, it looked like we were lined up potentially for a really good day of racing. I’m just so proud of the horses that did fire their best races. It was realistic, but not expected.”

Brown said he had never had a day like that at Arlington and struggled to put it into perspective.

“I mean, we’ve had some really great days. Last year we won both races as well, but to actually sweep the three spots in the Beverly D and run 1-2 in the Million is ….” he said, pausing for a moment. “I’m kind of at a loss for words. You set forth plans and you hope they come together. And they did.”

The downside, though, is that many of Brown’s owners with horses in the Arlington races had to be satisfied finishing behind a stablemate.

“The horses ran really well, so most people are happy with the efforts,” Brown said. “At the end of the day we go to Arlington and only two horses won.

“They ran well, but everybody wants to win, as well. The best thing I can do is put everyone in the position where they have the best chance they can to win. Most of the horses ran very well out there and the clients are happy with their efforts, but at the end of the day everybody wants to win. That’s what’s tough about horse racing. There has to be a loser, even when horses run well.”

Brown grew up in Mechanicville, about 18 miles south of Saratoga Springs, and developed his interest in racing during family visits to Saratoga Race Course. He won with the first horse he started at Saratoga in first race on opening day in 2008, picked his first career Grade I victory at Saratoga and won the training title at the track in 2016 with a record 40 wins. Todd Pletcher matched the wins mark last year when he edged Brown, 40-39. This rainy summer, Brown is well on his way to reclaiming the title, and with 25 wins through 22 days of the 40-day season, is in a good position to surpass 40 victories.

“We’ve had a very strong meet. I’m happy with the way things have gone,” he said. “Just keep moving forward. Especially given the weather. We have a lot of grass horses in our barn and for us to win as many races as we have has been rewarding and a relief. We have been bogged down by the weather some, both training and racing.”

“We’ve been fortunate still to win a large number of races despite the weather,” he said. “It goes to show you how the stable has really evolved. We have a lot more dirt horses.”

With her victory in the Beverly D., a Breeders’ Cup “Win and You’re In” race, Sistercharlie secured a spot in the Filly and Mare Turf, a race Brown has won three times in the last six years. He said she would likely make one more start before the Breeders’ Cup in the GI Flower Bowl S. Oct. 7 at Belmont Park. The Beverly D. was her third GI win in five races for Brown and followed her victory by a nose in the GI Diana S. July 21 at Saratoga.

“She’s in that top selective group of the best turf mares that I’ve had,” he said. “She’s a remarkable talent to come back in three weeks and run a real blinder. She ran terrific.”

Sistercharlie needed some sutures after the Beverly D to close some cuts in a hind leg. Brown said the wounds would delay her return to the track, but said he expects her to be ready for the Flower Bowl. Fourstar Crook is also being pointed to the Flower Bowl.

Robert Bruce won all six of his starts in Chile in 2017. He added victory #7 in the GIII Fort Marcy S. May 5 in his debut with Brown and was sixth, beaten one length in a troubled trip in the GI Manhattan S. June 9. The Arlington Million victory gives him a berth in the GI Breeders’ Cup Turf at 1 1/2 miles [he would need to be supplemented to the Breeders’ Cup] and Brown will probably prep him at that distance in the GI Joe Hirsch Turf Classic Sept. 29 at Belmont Park.

William Lawrence’s Analyze It looked like he was on his way to victory in the Secretariat, but was caught and beaten a neck by 38-1 winner Carrick (Giant’s Causeway). It was Analyze It’s third-straight runner-up finish, after opening his career with three victories.

“Disappointed he didn’t win. He ran another really good race,” Brown said. “I though the winner ran very well in that race. He just came up second-best. He attended a really quick pace on turf with some give in the ground and he was the only one there at the end. I give him a lot of credit. but you still need to win. The horse that won I thought got a great trip and ran a really great race so at the end of the day I’d say that Analyze It was just second-best.”

Brown said he is thinking about running Analyze It in the GII Hill Prince S. Oct. 6 at Belmont Park and have him complete his 3-year-old season in the Hollywood Derby in November at Del Mar.