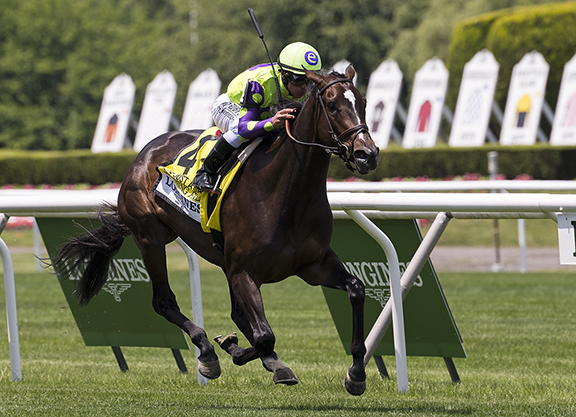 Trainer Chad Brown was trackside at Belmont Park Thursday morning to oversee turf workouts for a pair of top-class distaffers.

Working in company were eFive Racing's Rushing Fall (More Than Ready) and Peter Brant's Fifty Five (Get Stormy), who were each clocked a half-mile in a leisurely :50.48. The conditioner said that both mares would make an appearance on the much-anticipated opening day of the Belmont spring/summer meeting next Wednesday, June 3.

They both worked fine and will be entered for the [GIII] Beaugay [S.],” Brown told the NYRA notes team.

Klaravich Stables' Newspaperofrecord (Ire) (Lope de Vega {Ire}) is also set to make her 4-year-old debut in the GIII Intercontinental S. over seven furlongs June 6. Unbeaten in three starts as a juvenile, including the GI Breeders' Cup Juvenile Fillies' Turf, the bay filly was winless in three tries and was slightly disappointing at three, but is primed for a big campaign, Brown believes.

“She seems pretty settled to me in her works and I'm real excited to get her career resumed. I'm going to try to keep her [at distances] only up to a mile,” said Brown. “Based on the way she's training, and if she stays healthy, she should have a really good year.”