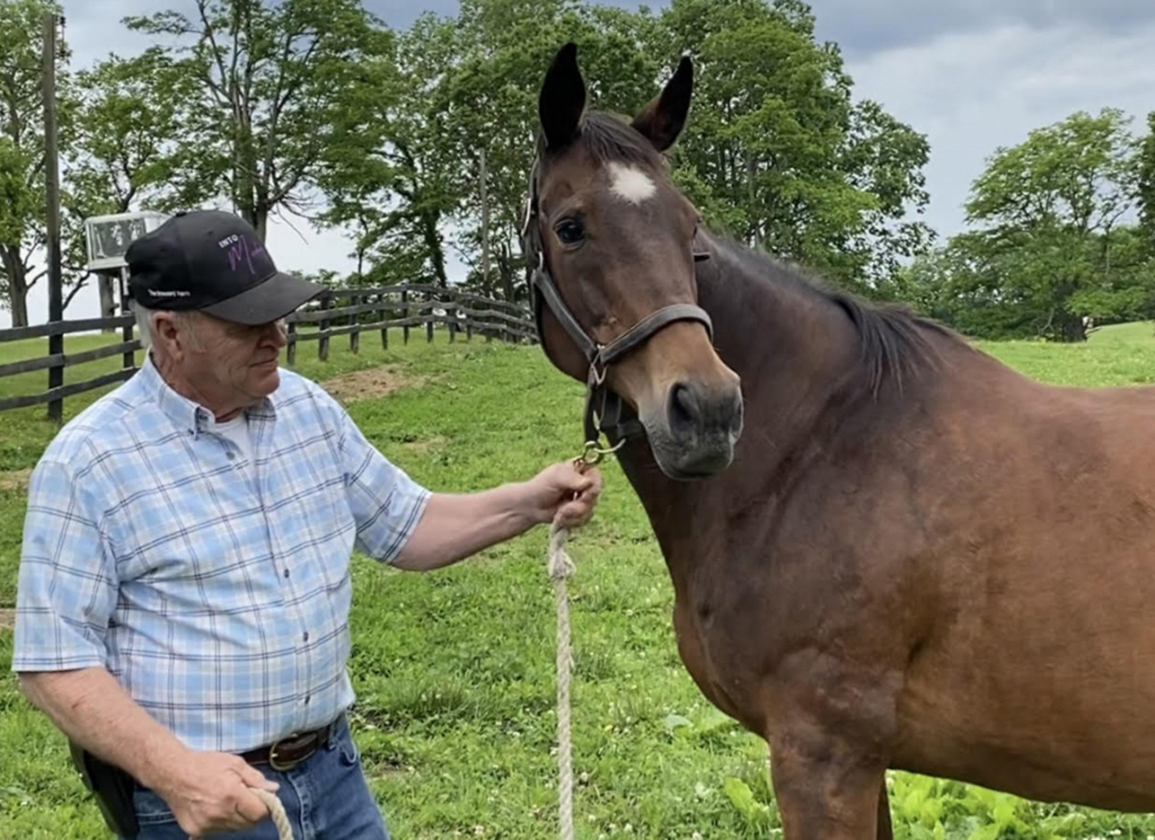 Bred in Kentucky by David Hager II, Leslie's Lady was an $8,000 short yearling purchase from Hager's Idle Hour Farm at Keeneland January in 1997 and was acquired by owner James T. Hines for $27,000 from the Margaux Farm draft at the Keeneland September Sale later that fall. Winner of four of nine juvenile starts for trainer Bob Holthus, including the Hoosier Debutante S., Leslie's Lady was runner-up in the 1999 Martha Washington S. and showed consistent form throughout the balance of her career, winning a total of five races for earnings of $187,014.

Leslie's Lady was acquired by Clarkland as a 10-year-old for $100,000 in foal to Orientate from Hines Estate at Keeneland November in 2006 and the purchase looked a shrewd one just over a year later when the mare's foal of 2005, an $80,000 Fasig-Tipton October yearling turned $180,000 OBS March breezer later named Into Mischief, became a Grade I winner for Spendthrift Farm in the CashCall Futurity at Hollywood Park.

Leslie's Lady visited Henny Hughes in 2009 and the result of that mating was Beholder, a $180,000 purchase by Spendthrift out of the 2011 Keeneland September Sale, who won no fewer than 11 Grade I races–including three Breeders' Cup events and a breathtaking score against males in the GI TVG Pacific Classic–en route to amassing career earnings of better $6.1 million.

As her produce continued to make waves on the racetrack and as Into Mischief became a sire of considerable importance at Spendthrift, Leslie's Lady's young offspring became increasingly sought-after at public auction. M.V. Magnier paid a Keeneland September sales-topping $3 million for her foal of 2015, a Scat Daddy colt named Mendelssohn, who went on to take the 2017 GI Breeders' Cup Juvenile Turf and the 2018 G2 UAE Derby (by 18 1/2 lengths) and was on the board in the GI Runhappy Travers S. and GI Jockey Club Gold Cup before heading off to stud at Coolmore.

The latter nursery's American Pharoah was the sire of Leslie's Lady's foal of 2018, a filly, that was purchased by Mandy Pope's Whisper Hill Farm for a sale-best $8.2 million at KEESEP in 2019 (click here for more from Chris McGrath), the most expensive filly ever sold at Keeneland. Named America's Joy, she sadly passed away in a training accident last August.

Leslie's Lady's 3-year-old daughter Marr Time (Not This Time) is in training with Brad Cox and was named a 'TDN Rising Star' for a debut victory at Keeneland Oct. 28. The mare's final foal is a 2-year-old Kantharos filly named Love You Irene. The filly that Leslie's Lady was carrying at the time of her purchase by Clarkland, the now 15-year-old mare Daisy Mason, was hammered down to the partnership of Whisper Hill and Gainesway for $475,000 in foal to Not This Time at Keeneland November last fall.