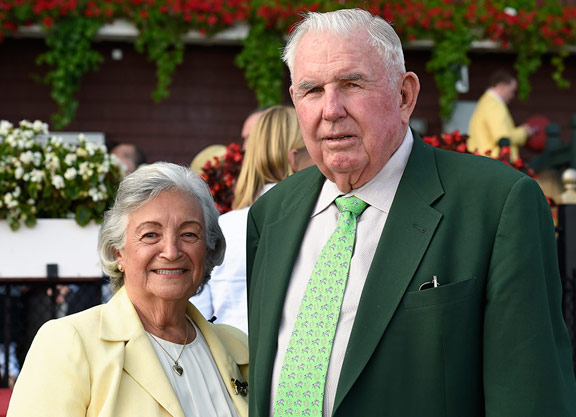 Chester and Mary Broman have dedicated 22 years to the New York breeding program and have enjoyed quite a bit of success with the likes of GI Breeders' Cup F/M Sprint winner Bar of Gold (Medaglia d'Oro), MGISW Artemis Agrotera (Roman Ruler) and GI Florida Derby hero Friends Lake (A.P. Indy), among others. The couple spent the first 20 years racing everything they produced on their 300-acre farm in Chestertown, N.Y., but starting last term, they began selling off their crops in what Chester Broman refers to as estate planning. Buyers at Fasig-Tipton's upcoming yearling sales will have a chance to acquire some of New York's finest with five Broman-bred yearlings in the Saratoga Selected Yearling Sale and an additional seven in the NY-Bred Yearling Sale.

“I am slowing down on my racing interests and selling off all of them,” Chester Broman said. “We are selling all of the 2-year-olds and we sold all of the 3-year-olds already. I am only racing horses we could not sell. I am going to be 84 years old, so it is getting tough to keep enthused about it.”

Broman had his biggest score in the sales ring earlier this year when the first foal out of GI Frizette S. and GI Ballerina S. heroine Artemis Agrotera, a colt named Chestertown (Tapit), topped the OBS March Sale at $2 million, setting a new record for the auction. The handsome gray was purchased by West Point Thoroughbred, Sienna Farm and Rob Masiello, but Broman stayed for in a piece. He is now in training with Steve Asmussen and recently worked a half-mile at Saratoga from the gate in :48.55 (25/156) (Click here for XBTV video of the breeze).

When asked about the colt's progress, Broman said, “I don't think he is quite ready yet. I am excited about him. I have nothing to do with it. I just listen. I don't think he will start at Saratoga, probably Belmont. He is a great big horse and you have to go easy with him.”

The Bromans will offer a half-sister to Chestertown by Uncle Mo as Hip 178 in their five-horse consignment with Becky Thomas's Sequel New York at the Fasig-Tipton Saratoga Selected Yearlings Sale. They purchased this filly's third dam, GISP Immerse (Cox's Ridge), for $350,000 in foal to A.P. Indy at the 1997 Keeneland November Sale, just one year after she produced future GISW Stephen Got Even (A.P. Indy). The resulting foal was SW & MGSP Indy Glory, the dam of Artemis Agrotera, who produced an Arrogate filly Apr. 22 of this year and was bred back to Into Mischief.

“You always hope for [the success we had with Chestertown],” Broman said on his expectations for the filly in the sales ring. “She is a nice-looking horse, so we will see what the sale brings.”

He continued, “Artemis Agrotera is a very, very nice mare. She is beautiful and she produces beautiful horses. She is also a big mare and all of her babies are big so far, including the filly we are selling. We should be alright selling her. You never know when you go to a sale.”

The Bromans' other Saratoga Selected Yearling Sale offerings are: Hip 62, a Hard Spun filly out of MSW Mineralogist (Mineshaft); Hip 99, a son of Quality Road out of Mineralogist's MSP half-sister Risk a Chance (A.P. Indy); Hip 105, a Pioneerof the Nile filly out of Artemis Agrotera's half-sister Rumors of Glory (Storm Cat); and Hip 125, an Into Mischief colt out of a full-sister to MGSW American Lion (Tiznow).

The couple were originally set to offer a full-sister to Bar of Gold, who upended the 2017 Breeders' Cup F/M Sprint at odds of 66-1, at the Saratoga Selected Yearlings Sale, but they had to scratch her due to a minor issue. However, buyers may get another chance to purchase the Medaglia d'Oro filly next year at the 2-year-old sales.

“We had to take her out of the sale with a minor issue,” Broman said of Hip 39. “She would have been a high-priced horse. It is possible we re-offer her next year.”

The Bromans will offer seven more yearlings the following weekend at Fasig-Tipton's New York-Bred Yearling Sale, also through Thomas's Sequel New York. The homebreds on offer include Hip 330, a Will Take Charge colt that is a half to three stakes winners; Hip 354, a Freud filly out of SP Backwood Bay (Girolamo); Hip 361, a daughter of Super Saver whose second dam is MGSW Carmandia (Wild Rush); Hip 391, a California Chrome colt out of a daughter of MGSW Sara Louise (Malibu Moon); Hip 400, a son of Shanghai Bobby out of MSW Dash Dot Dash (Put It Back); Hip 540, a Speightstown half-sister to MSW Newly Minted (Central Banker); and Hip 621, a full-sister to the Bromans' MSW Mr. Buff (Friend or Foe).

Three-time stakes winner Mr. Buff, a son of Broman-bred Friend or Foe, who is by their homebred Florida Derby victor Friend's Lake, is scheduled to run Aug. 7 in the Evan Shipman S. at Saratoga.

All 12 of the yearlings on offer next week have been prepped at the Bromans' farm just 45 minutes from Saratoga, where they reside during the meet. The couple, who had show horses for years, purchased the farm in the 1990s and delved into the Thoroughbred breeding business.

“We had show horses for the kids since they were small,” Broman said. “I had a son that rode at the [Madison Square] Garden since he was 13. We had ponies and horses and then we went to boating for a while. I sold a big boat and bought the horse farm.”

The owner, President and CEO and Clifford Broman & Son, Inc., a general contracting company based in West Babylon, N.Y., continued, “We got them all ready at the farm here. We think we did a good job getting them ready. We will see how they look at the sale compared to other horses. When you look at your own, you see nothing but pretty horses.”

It was a no brainer for Broman to sell all of his yearlings in New York-based auctions due to the state's breeding incentives. The only debate was which yearlings to send to which of the two upcoming auctions.

“I chose to sell them in the New York sales so hopefully more New Yorkers will buy them,” he said. “If I took them to Kentucky, the odds may be less. The breeding awards are pretty good in New York.”

As to how the decisions were made on which yearlings to sell where, Broman said, “It is a committee decision. I have my farm manager Greg [Falk] and Becky Thomas is involved with it. We look at them all and try to find the best road to take.”

While the Bromans may be winding down their racing operation, they still plan to continue with their well-respected breeding program.

“I think we are selling about 15 mares at Saratoga [Fall Sale],” Broman said. “We will keep about 30 and have six or seven more coming off the track.”

The Fasig-Tipton Saratoga Selected Yearlings Sale will be held at Humphrey S. Finney Pavilion Aug. 5-6 and the NY-Bred Sale will take place there Aug. 11-12.