Britt’s Passing The End Of An Era 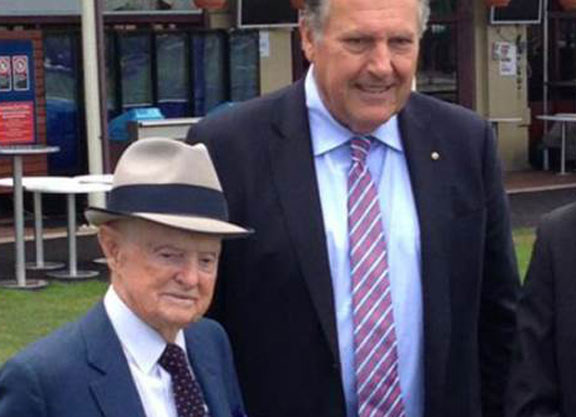 The final lines have been written in some of the most notable chapters of the great racing storybook with the death at the age of 103 of Edgar Britt, an Australian jockey who enjoyed notable success around the world.

Edgar Britt’s first international foray came in 1933, the year after Phar Lap (NZ) (Night Raid {GB}) had made history by crossing the Pacific to land the Agua Caliente H. near Tijuana in New Mexico. Inspired by this triumph, Sydney-based trainer Mick Polson headed for the USA with Winooka (Aus) (Windbag {Aus}) and Trevallion (Aus) plus his 19-year-old apprentice Edgar Britt. Trainer and rider thus wrote their names in the history books when Winooka, who had previously proved himself the best sprinter/miler in Sydney by taking the AJC Doncaster H. under 9 stone 13lb, won the Baltimore H. at Pimlico; while Trevallion landed a gamble in lesser company at Laurel Park.

Once back home in Sydney, Britt confirmed his position as one of Australia’s best jockeys, most notably enjoying a red-letter day at Randwick during the Autumn Carnival in 1934 when he rode a treble headed by the victory of Broad Arrow (Aus) (Treclare {GB}) in the AJC Sydney Cup under 7 stone 1lb. Britt’s success led to him being offered a huge retainer to ride in India. He spent a decade there, retained by the Maharajah of Baroda and topping the jockeys’ standings eight times. When the Second World War ended in 1945 and the racing programme in Great Britain began to return to normal, the Maharajah dispatched his jockey to England to ride his string of horses trained at Middleham in Yorkshire by Fred ‘Sam’ Armstrong. The first champions whom Britt rode in England were the Maharajah’s top-class colts Sayajirao (GB) (Nearco {Ity}) and My Babu (GB) (Djebel {Fr}). The former was a top 3-year-old, taking the Irish Derby and St Leger in 1947; while the latter proved himself a leading juvenile that year by dead-heating in the New (now Norfolk) S. at Royal Ascot before an impressive victory in the Champagne S. at Doncaster.

The following season My Babu won the 2,000 Guineas, but two changes had been made to the arrangements by this time. At the instigation of the Maharajah, Sam Armstrong’s string had moved down from Middleham to Warren Place in Newmarket; while the Maharajah was now retaining Charlie Smirke (who consequently rode My Babu in the 2,000 Guineas). Britt’s career was not, however, hindered by the loss of that job: he was retained by Marcus Marsh and also, while the royal jockey Harry Carr was sidelined with a broken leg, by King George VI. For the latter’s trainer Cecil Boyd-Rochford he rode his second successive St Leger winner, partnering William Woodward Snr’s Black Tarquin (Rhodes Scholar {Fr}) to victory in the oldest Classic that autumn.

Furthermore, Sam Armstrong continued to use him on horses owned by his other patrons, while he was also the jockey of choice for the leading trainer in the north, Captain Charles Elsey. Britt remained in Britain until his retirement in 1959, ending up with a huge haul of big-race victories including seven Classic triumphs, a total which means that he still ranks as the most successful Australian jockey in British Classic races. His final five Classics were all on horses trained by Captain Elsey: Musidora (Ire) (Nasrullah {Ire}) (1,000 Guineas and Oaks in 1949), Frieze (GB) (Phideas {GB}) (Oaks in 1952), Nearula (Ire) (Nasrullah {Ire}) (2,000 Guineas in 1953) and Honeylight (GB) (Honeyway {GB}) (1,000 Guineas in 1956).

After retiring from the saddle, Edgar Britt returned to his native Australia, where he spent the rest of his working life writing for a newspaper in Sydney. More than that, however, he became the grand old man of Australian racing, described by Racing NSW Chairman Peter V’Landys as “one of Australia’s treasures … highly respected – you could not meet a nicer or more humble man”. His passing marks the end of an era, the end perhaps of a golden age.