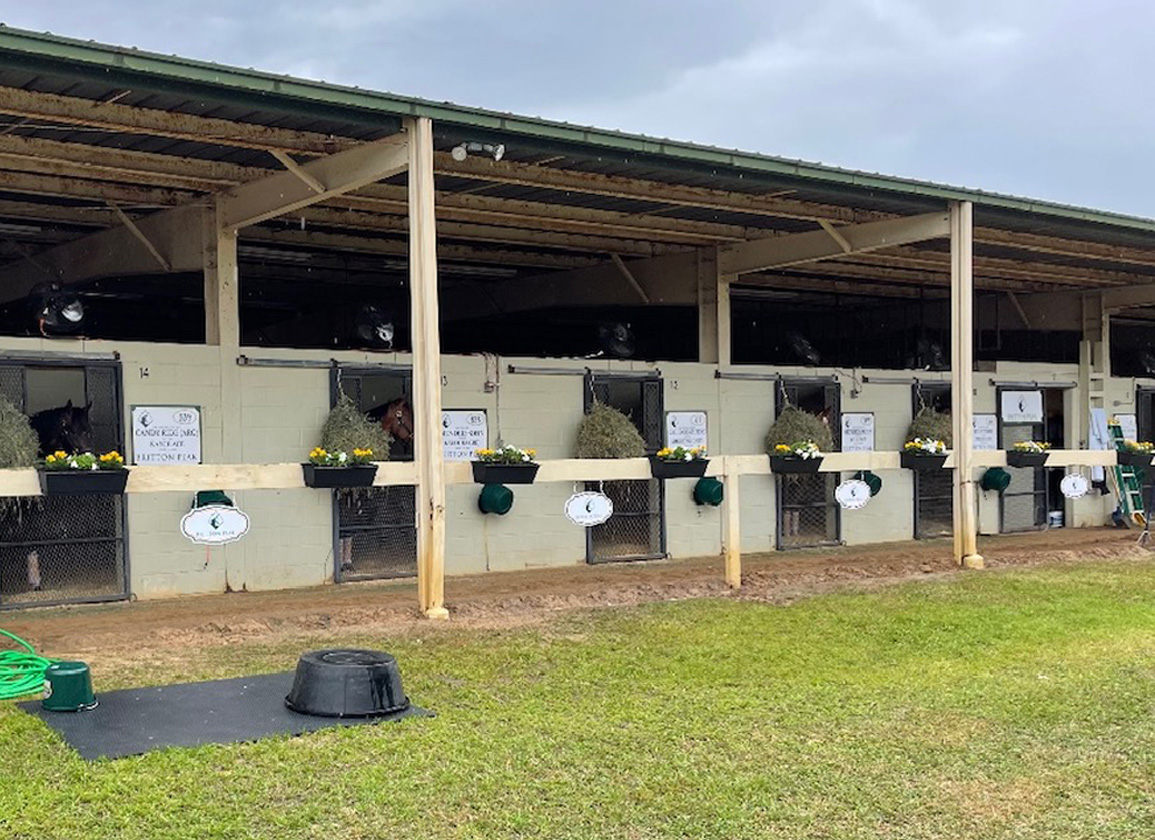 Horses run deep in the blood of the Martin family. Anyone following the sport at any point during the past 50 years would in all likelihood be familiar with the lineage, which in some ways has developed its own brand name in racing. Beginning with the legendary Hall of Famer Frank 'Pancho' Martin, famously known for training Sham to runner-up finishes to Secretariat in the 1973 Kentucky Derby and Preakness S., and followed by his son Jose Martin, who commandeered the career of a trio of champions, including top sprinter Groovy, the family name remains prolific today through the efforts of third generation horseman Carlos Martin, who is a successful trainer on the ultra-competitive New York circuit. And while the family legacy is a rich one, the present day Martins continue to build on that illustrious reputation, highlighted by their latest venture, Britton Peak, which will offer its first draft of horses at the upcoming OBS March Sale in Ocala, Florida.

The fledgling operation, which bases its stock at Big Lick Farm in Morriston, Florida, is directed by its founder and CEO Gloria Martin-Wallshein, in addition to another longtime horseman in the family, Greg Martin, who is the head bloodstock consultant and barn manager overseeing the purchase and development of all of Britton Peak's youngsters.

“It's about rebuilding old relations and developing new ones,” said Gloria Martin, daughter of Jose Martin, who previously worked in Manhattan for two decades, first as a project manager at an entertainment hedge fund and later in the public relations sector in the culinary industry and luxury branding. “We wanted to do something my family has never been done before. We have the contacts and the knowledge. It's not like we need 10-15 years to build our brand.”

Dipping its toe in the waters over the last two years, the operation previously sold a few horses under a different banner, however, 2022 represents Britton Peak's first foray under its own name. Leading the operation's eight horse roster at next week's March sale is Hip 164, a colt by Bolt d'Oro who blazed an eighth of a mile in :9 4/5 during the initial day of under tack works Thursday. Out of Street Love (Street Boss), the Apr. 4 foal, a $50,000 Keeneland September purchase, is out of a full-sister to Grade I winner Capo Bastone.

“He certainly wasn't a surprise,” said Greg Martin, trainer and former assistant to his father, Frank Martin. “He was very forward from Day 1. He is an absolutely gorgeous individual and a really beautiful mover. He has been one of my top thee or four horses on the farm all year. It's scary because he's still so immature, and doesn't fully know what the game is about yet. But he has a lot more in the tank.”

Britton Peak also presents Hip 52, a colt by Pioneerof the Nile out of GSP Quick Release (Trappe Shot), representing the extended family of sprint champion Safely Kept; and Hip 605, a colt by Empire Maker out of the Tapit mare Mapit, a half-sister to MGSP Gold Standard (Medaglia d'Oro). The latter hails from the family of the Grade I-winning millionaire Dream Supreme, dam of GI Hopeful S. winner Majestic Warrior.

“I like him a lot,” said Greg Martin. “He is by a proven stallion. The horse also has such a physical look to him. He's scopey, well built and a gorgeous individual.”

“I'm a fan of sophomore sires,” stated Greg Martin. “I like them because you have the unknown factor, basically assessing the potential of a stallion. [When selecting a stallion], my big thing is looking at their past performances as racehorses, and horses that were precocious early. That's not necessarily to say that every race was a super race, but more that they showed those signs of brilliance. I look for stallions that have that 'wow' factor during their racing career. I'm also a big pedigree guy, so I look at that too.”

In regard to the bottom side of the pedigree, Greg Martin added, “Our horses will typically have something under the second and third dams because honestly, if they have a lot of black-type under the first dam, I can't afford them. Having been in racing my whole life, I am familiar with good horses going back a few years, so that is definitely one of the things I look at.”

He continued, “I also really like Mendelssohn. He's a half to Into Mischief–that whole family is so prolific. And I really loved the horse himself. He shipped all over the world, was so hard-knocking and consistent. It's as good a pedigree as you can get.”

Rounding out the consignment is Hip 539, a colt by Candy Ride (Arg), a half-brother to GIII Schuylerville S. winner Comical (Into Mischief), who also hit the board in the GI Chandelier S. and

While this year's March offering (after two outs) is comprised of colts exclusively, Britton Peak has four fillies slated for next month's OBS April Sale. At the sales, the operation typically favors colts on a 70-30 ratio.

“The colts just happened to be a little bit more advanced at this stage, a little bit quicker to develop,” said Greg Martin, explaining Britton Peak's colt-centric consignment at the March sale. “It was not necessarily by design to bring only colts here. It's just the way it happened.”

In regard to having a hand in both selecting and training the current roster of pinhooks, he added, “It's so nice when you get to pick them out and then train them too because obviously, I'm not going to buy something that I don't like. So, I'm starting off with horses that there was something that I saw in them as yearlings. You start with them from Day 1 and, hopefully, they develop into what you pictured in your mind. We have been very fortunate in that they all have come along nicely.”

All In the Family
Beginning with four horses in 2020, Britton Peak quickly expanded on that number, and ended up pinhooking six to seven horses in each of the past two seasons. The operation appears poised to surpass that mark very early in 2022, with 35 head under its own banner currently, and eight of those slated for March and an additional seven targeting the upcoming OBS April Sale.

“This wasn't something that we decided to do on a whim. This has been planned out for many years and we were just waiting for the right opportunity to come on the scene strong,” said Greg Martin. “We were going to do it the right way or we weren't going to do it.”

According to Gloria Martin, the goal is to continue expanding the operation's portfolio into a full-service enterprise, including all phases of training, sales, bloodstock selection and ultimately, breeding.

“By having a training facility in Ocala, we can provide all our clients a one-stop shop hub–breaking, training, rehab, equine consulting [bloodstock agency],” explained Gloria Martin. “As consignors, we want to engage in every aspect related to our clients' acquisitions.”

Also involved in the family firm is Jose Martin Jr., the youngest son of Jose Martin, and further broadening the family tree is Greg Martin's 21-year-old son, Gregory Jr., who works as an assistant to his father.

“We have come a long way to this year's launch of Britton Peak,” said Gloria Martin. “I had a dream a decade ago to continue my grandfather's and father's tradition of excellence as horsemen and to ensure their legacy lives on through Britton Peak. Racing is really in our blood. Four generations of Martins. It really is a family affair. It's been a long time coming.”