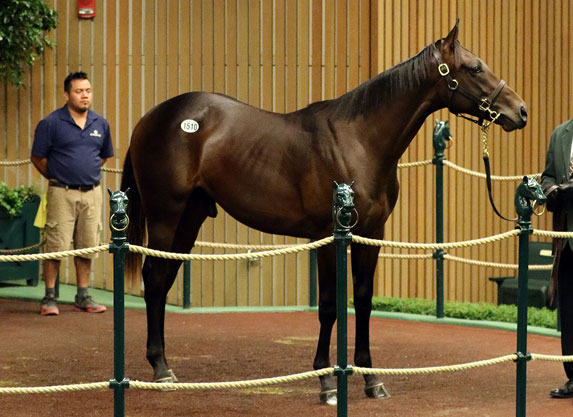 “Trade was very vibrant today, the not-sold rate was down over last year and all of the other indicators were positive,” said Keeneland's Director of Sales Operations Geoffrey Russell. “The market seems to be very vibrant and the comments from the barn are that they are very busy. So we hope it continues on to be vibrant.”

Winchell Thoroughbreds and Phoenix Thoroughbreds partnered to take home the top-priced lot during Sunday's session, paying $875,000 for a son of Uncle Mo (hip 1510) from the Mt. Brilliant Farm consignment.

Several of the major players from the auction's Book 1 continued to be a presence throughout Book 2, including trainers Bob Baffert and Chad Brown.

“We will see some of the Book 1 people leaving now,” Russell said. “But for people like Bob and Chad and all of those to have lasted this long shows the quality of horses has continued on from Book 1 to Book 2. I think that's very positive.”

The total gross of last year's 12-day sale was $307,845,400 and the 2018 sale projects to surpass that figure during Monday's seventh session with an additional six days of selling to go.

The Keeneland September sale continues through Sunday with sessions beginning daily at 10 a.m.

A colt by Uncle Mo set the pace Sunday at Keeneland when selling for $875,000 to Ron Winchell and Phoenix Thoroughbreds. Out of Morena (Per) (Privately Held), the yearling (hip 1510) is a half-brother to GI Belmont S. winner Creator (Tapit).

“From our prospective, he's just an all-around very nice horse,” Winchell said, adding the youngster would be trained by Steve Asmussen.

The colt was one of 21 yearling purchases of the sale for Phoenix and its first in partnership. Winchell was signing for his 11th purchase, but admitted bidding was competitive.

“This sale has been very strong,” he said. “I have been very good at getting outbid.”

The yearling was bred and consigned by Greg Goodman's Mt. Brilliant Farm.

“This is a really nice Uncle Mo,” Goodman said. “This horse does it all. He has the mind. He X-rays perfectly and scopes perfectly. There is nothing wrong with him. And he looks fast. He has a huge heart, based on the heart scans. There weren't any knocks on him.”

The yearling was always targeted for Book 2, which was three sessions after a select one-session Book 1 a year ago, but Goodman said the decision was made to keep him in Book 2 even after Keeneland tweaked the format for this year's auction.

“We thought we would put him in Book 2 the way the catalogues were before, and then we just kept him here in Book 2 when they changed it,” he explained. “But he would have been a Book 1 horse, too. I think he stands out here. He's a great-looking horse.”

The Zayat family was taken on the ride of a lifetime when its American Pharoah swept the Triple Crown in 2015 and they will be hoping history repeats itself after Justin Zayat purchased a colt by the Coolmore sire for $800,000 Sunday at Keeneland. The yearling is out of multiple stakes winner Ragtime Hope (Dixieland Band) and is a half-brother to GI Breeders' Cup Sprint winner Secret Circle (Eddington).

“His pedigree is a stallion's pedigree,” Zayat said after signing the ticket on hip 1558. “He's a half-sibling to Secret Circle, who is a really fast racehorse himself. He kind of reminded me of American Pharoah. He's kind of a plain looking, brown wrapper horse. And he had the class. He had a colic surgery earlier which maybe scared some buyers off, but for us, we loved him. Bob looked at him for us and he loved him, too, so we are going to be sending him to Bob Baffert in the future. Hopefully he can be a Grade I winner for his dad in his first crop.”

American Pharoah had three seven-figure yearlings during Keeneland September's Book 1, led by a $2.2-million colt purchased by Godolphin Monday. Through six sessions, 44 yearlings by the Triple Crown winner have sold at the September sale for $19,205,000 and an average of $436,477.

The stallion's early success in the sales ring has astounded even Zayat.

“They are selling like hot potatoes,” Zayat said. “It's absolutely insane. He is exceeding even my expectations. I knew he was going to be exciting, but to see the averages where they are and all of the million-dollar horses, it is really unbelievable. We're enthusiastic and excited. [The price on hip 1558] was a little higher than I expected to go, but it seems like you have to stretch for these Pharoahs.”

“Every single one of the good horses in this market that I've bid on, every single other smart individual is on,” he said. “So hopefully we're right about [hip 1558].”

The yearling was consigned by Warrendale Sales as agent for Stonestreet, which purchased Ragtime Hope for $675,000 while in foal to Arch at the 2013 Keeneland November sale. The mare produced a colt by American Pharoah's sire Pioneerof the Nile this year and was bred back to Mastery.

Chiquita and Jeff Reddoch's Stonehaven Steadings capped a banner day in the sales ring with the $450,000 sale of a colt by Street Sense to Phoenix Thoroughbreds Sunday at Keeneland. The yearling (hip 1775) is the first foal out of stakes-placed Easy Living (Big Brown), a mare the farm purchased for just $60,000 at the 2015 Keeneland November sale.

“She was a big beautiful Big Brown mare,” said Leah O'Meara, who manages the farm's relations and investment opportunities. “She was stakes placed with over $150,000 in earnings, so she was a good racehorse, in our opinion, and better than some of the stock we'd bought before. [Farm manager] Colby Marks and I looked at her at the barn and we both liked her. We went for her and the rest is history.”

O'Meara continued, “We went to Street Sense with her and her first foal came out beautiful.”

Easy Living, a half-sister to graded stakes placed Jaramar Rain (Thunder Gulch) and stakes winner Harbor Mist, produced a filly by Quality Road this year and was bred back to American Pharoah.

“It's been an amazing day,” O'Meara said. “It's been out of this world for our team. Everyone has worked so hard. Colby and [bloodstock director] Aidan [O'Meara] have raised these horses and everyone back at the farm and here at the sale has worked so hard to make this happen. And we're so thankful for that.”

Always Tomorrow Pays Off for Airdrie

Brereton Jones's Airdrie Stud paid $20,000 to add the then 5-year-old mare Always Tomorrow (Badge of Silver) to its broodmare band at the 2015 Keeneland January sale. Since then, the mare's full-brother Bigger Picture became a Grade I winner and the mare's purchase paid dividends at Keeneland Sunday when the mare's second foal, a daughter of Kitten's Joy, (hip 1668) sold for $300,000 to West Bloodstock on behalf of Repole Stables.

“It was a very deep family, obviously, so that's the initial attraction,” Bret Jones said of the 2015 acquisition. “And to be honest, it was Bryan Cross at Hidden Brook who grabbed me in the back ring and told me they had a mare coming up. And Sergio [de Sousa] told me the same thing. So the Hidden Brook guys were doing what they do great and that's sell horses. We thought she was good value and we bought her. Bigger Picture had not jumped up and done what he had done yet, but it was a deep family that we always wanted to take part in.”

“We went to Mr. Ramsey and showed him the pedigree and he loved it as well,” Jones explained of the mare's date with Kitten's Joy. “So we partnered up on the Kitten's Joy foal. She was a beautiful filly who sold the way we thought she should have sold today.”

Always Tomorrow is currently in foal to Summer Front and she has a weanling filly by Airdrie's budding freshman sire Cairo Prince.

“That was a big deal for us,” Jones said. “The expectations were kind of off the charts for the horse after the weanling sales that he had. But, really from the start, we've heard from everyone who had them that their best days will be as they stretch out and start going two turns and start maturing and doing exactly what you'd expect that Empire Maker, Pioneerof the Nile line to do.”

Hidden Brook's Sergio de Sousa admitted they paid more than they expected when they acquired a filly by Broken Vow for $110,000 on behalf of a pinhooking syndicate at Keeneland last November, but it all came right Sunday when the yearling attracted a final bid of $300,000 from Tom McCrocklin.

“We perhaps paid a little bit more than we would have liked to for her, but she was a lovely filly,” de Sousa said. “She grew up the right way and she rewarded us today.”

Asked what encouraged the group to stretch for the filly last November, de Sousa said, “We always liked the sire. We've always supported Broken Vow. He's a great sire, a solid sire. She is a strong filly and kept growing and progressed and showed well. The right two or three people hooked up on her.”