Bridging the Gap: Karakontie and the Turf Triple 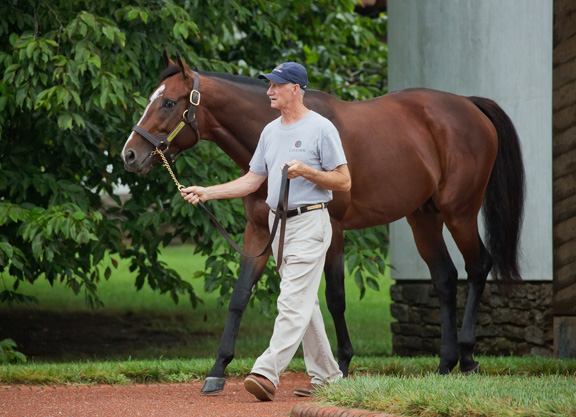 The announcement of NYRA's new Turf Triple Series couldn't have come at a more appropriate time for this column.

We were sitting in Michael Hernon's office at Gainesway Farm, getting ready to go out and film the G1 Poule d'Essai des Poulains (French 2000 Guineas) and GI Breeders' Cup Mile winner Karakontie (Jpn) (Bernstein), when our phones began buzzing: $5.25 million would be on offer this summer across six races in New York for 3-year-olds on the turf.

As Sid Fernando documented in his column Taking Stock back in October, high quality turf racing is on the rise in the U.S.–46% of races at America's elite meetings in 2017 were on the turf, and 39% of all graded races the same year were on the grass.

The Turf Triple Series only accentuates the fact that there is real opportunity for turf sires in the U.S., and new players are needed. Among the top 10 American turf sires of 2018, the runaway leader Kitten's Joy and eighth-placed Tapit are both 18; English Channel and War Front are 17; More Than Ready is 22 and Scat Daddy, Giant's Causeway and City Zip are dead.

And, of course, Karakontie, the originally intended subject of this column who has his first runners this year.

Gainesway is no stranger to success with European imports, and, in particular, winners of the French Guineas. Under the stewardship of John Gaines in the 1970s and 80s, Gainesway stood four winners of the Poule d'Essai des Poulains: Blushing Groom, Green Dancer, Riverman and his son Irish River. As Hernon pointed out, winning a top-class mile race “requires speed, and the ability to carry it a mile”–a trait that has generally translated favorably into sire success.

Karakontie proved without a doubt that he possesses that trait not only with his Poulains win, but also his victory in the 2014 GI Breeders' Cup Mile beating older horses from post 14. He was also a Group 1 winner at two, taking France's most important juvenile race, the Prix Jean-Luc Lagardere, over seven furlongs. And while his profile is undeniably turf, his pedigree is one that transcends continents and surfaces: by the Storm Cat stallion Bernstein (also the sire of superstar Tepin), Karakontie, a Niarchos Family homebred, is out of a Sunday Silence granddaughter of Miesque, who incidentally herself won the G1 Poule d'Essai des Pouliches (French 1000 Guineas) and the Breeders' Cup Mile in 1987 and 1988 before going on to be an outstanding producer, her progeny headlined by the Poulains winner Kingmambo, who had no problem carving out an intercontinental legacy while standing his entire stud career at Lane's End. Miesque occupies the same spot in the pedigree of last year's Cartier champion miler Alpha Centauri (Ire) (Mastercraftsman {Ire}).

It is significant that, according to Hernon, Gainesway had already been considering adding a new turf horse to its roster when Karakontie came on the radar. The triple turf Grade I winner's propensity for the grass didn't make him a second-rate stallion prospect, as once could have been the case in the U.S., and Gainesway partnered with the Niarchos Family and John Moores and Charles Noell's Merriebelle Stable to stand Karakontie. He has stood for $15,000 his first four seasons.

“We feel in turf racing in this country, there are very significant purses to be won,” said Hernon. “There is a lot of money to be won on turf and turf racing is very appealing. This new Turf Triple Series comes at a very appropriate time. We hope that Karakontie will have progeny to race for those big purses. We're very hopeful that he can beget horses of his level of ability and he could become, therefore, a very important stallion in his own right.”

“Certainly being out of a Sunday Silence mare, Karakontie has a shot to produce some winners on dirt, but primarily the family and his performance was at the highest level racing on turf,” Hernon said. “So, we wouldn't exclude dirt at all, but, we would strongly suspect a lot of his top runners will take to the turf as he did.”

Karakontie has 88 first-crop 2-year-olds to represent him this year, and those are spread across American and European trainers and breeze-up consignors.

“Here in the U.S., Wesley Ward has some of Karakontie's progeny,” Hernon said. “We're hoping he might have a 2-year-old by Karakontie who could race at Royal Ascot. And then you have Barry Eisaman, a leading consignor out of Ocala. He purchased a good one [as a yearling] for $150,000. There is also a very smart colt that cost $220,000 [Karakontie's top-priced yearling], purchased by Gatewood Bell. That one may go directly into training–we don't know for sure yet.

“Across the pond we have noted horseman Willie Browne, who mentioned to me recently that they're very good movers and he's quite optimistic. Jessica Harrington, a noted Irish trainer who of course handled with great skill the career of Alpha Centauri, has some Karakonties. And then you go over into England and you have Karakonties with top trainers such as Sir Michael Stoute, Mark Johnston, Roger Varian and several others.”

There are three Karakonties catalogued for OBS March including hip 108, a colt out of the stakes-winning Cruise (Posse) who was a $120,000 yearling. He is being sold by Ciaran Dunne's Wavertree Stables.

Gainesway Farm President Antony Beck strongly supported Karakontie in his first year at stud and will continue that backing by racing several of his progeny in Europe.

“We have one particularly good colt that's co-owned by Flaxman,” Hernon said. “He's in France currently going through his early training with Andre Fabre. Antony stepped up in year one in support of this horse and he sent him 40 mares. He's strong behind the horse and we think he's a horse who merits that kind of support.”

While opportunities for turf sires in America are on the rise, there is still an understandable bias towards dirt sires in the U.S. Hernon, however, said he thinks the playing field is leveling.

“I think the turf concept is progressively being accepted and more people are looking in that direction,” he said. “Kitten's Joy has been a revelation. As he ages, some of these younger horses are going to have to step forward and become significant sires. With the increased purses assigned to turf racing, it makes one think about that more seriously. I think turf horses may well stay around a little longer, and that's another angle to it. It would be fun to have a top turf horse in the stable, especially if he was by Karakontie.”

On the subject of opportunities, let's return to the Turf Triple Series. This initiative by NYRA is an obvious boon for turf sires already in the U.S. and should help stimulate the interest of American studs in standing such horses. But it is also an opportunity for European-based breeders and owners dealing in middle-distance horses.

The demand for precocious horses that are mature enough for an early return either in the sales ring or on the racetrack has grown so large in Europe that stallions who did their best running at much more than 1 1/4 miles (2000 metres) are seriously struggling to get early support, and thus any shot at making it as a sire. Many of them will never get a true chance, with breeders flocking in greater numbers to horses that won over five or six furlongs at two.

The fact that the Turf Triple Series will offer six races at a minimum of 1 3/16 miles (1900 metres) and up to 1 1/2 miles (2400 metres) is great news for European breeders and owners with middle-distance stock because it only bolsters the market that was already there for that kind of horse to be sold to the U.S. Americans will be shopping for them as horses in training and–thanks to the Chad Brown/Klaravich experiment that resulted in Newspaperofrecord (Ire) (Lope de Vega {Ire})–maybe increasingly as yearlings, too.

No, six races in New York alone are not going to stimulate the breeding of middle-distance horses in Europe, even if they are worth $5.25 million, but, thanks again to Sid Fernando, we know that there are more elite races over a mile on the turf than on the dirt in the U.S. Middle-distance turf racing in America is a growing phenomenon that will affect the way horses are bred and traded transatlantically.