Home » Archive » Top News » 'Bricks', Mitole and 'Max' To Battle Out Horse of the Year

'Bricks', Mitole and 'Max' To Battle Out Horse of the Year 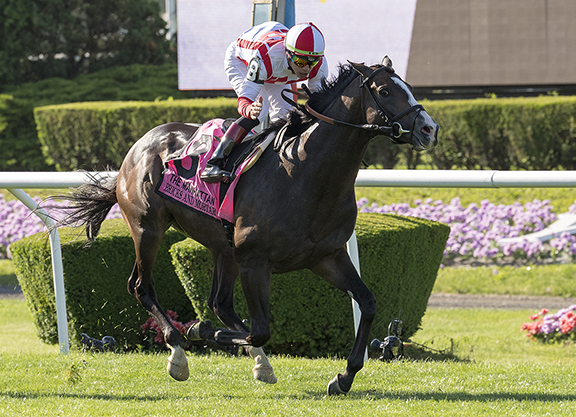 The finalists for the 12 equine and five human divisions for the 49th annual Eclipse Awards were released Saturday morning, with GI Breeders' Cup Turf hero Bricks and Mortar (Giant's Causeway), GI Breeders' Cup Sprint victor Mitole (Eskendereya) and, in a bit of an upset, Maximum Security (New Year's Day) set to fight out the night's top honor as 2019 Horse of the Year.

Heavily favored to take home the hardware for champion turf male, Bricks and Mortar was stellar in putting together a perfect six-for-six season in 2019. The $200,000 Keeneland September purchase, who returned from a potentially career-ending injury in late 2018, posted five top-level victories in the sequence, including the inaugural Pegasus World Cup Turf Invitational S., the Old Forester Turf Classic, the Manhattan S. and the Arlington Million. The Breeders' Cup Turf marked his first try past 10 furlongs and he passed the test with aplomb, rallying to score by a head. Coat-tailing Bricks and Mortar as Eclipse finalists are his owners, Seth Klarman's Klaravich Stables and partner William H. Lawrence; trainer Chad Brown–shooting for a fourth straight statuette; jockey Irad Ortiz, Jr., looking to defend his title; and breeder George Strawbridge, Jr. Bricks and Mortar enters stud at Shadai Farm in 2020.

Mitole is also a lock for champion sprinter and is also a finalist for champion older dirt male in a campaign that saw him make six trips to the winner's circle from seven appearances. Campaigned by Bill and Corinne Heiligbrodt and conditioned by Eclipse finalist Steve Asmussen, the $20,000 KEESEP yearling turned $140,000 OBS April juvenile posted an authoritative win in the GI Churchill Downs S. and followed that with a 3/4-length defeat of 'TDN Rising Star' and older dirt male candidate McKinzie (Street Sense) and two-time G1 Dubai Word Cup winner Thunder Snow (Ire) (Helmet {Aus}) in a GI Metropolitan H. for the ages in early June. After stubbing his toe a bit against fellow finalist Imperial Hint (Imperialism) when the latter ran a hole in the wind in the GI A.G. Vanderbilt S., Mitole atoned with an easy score in the GI Forego S. ahead of the Sprint, for which he earned a booming 112 Beyer Speed Figure. Mitole retires to Spendthrift Farm in 2020.

Maximum Security finished off his sophomore season strongly and received the nod for the third spot on the Horse of the Year ballot over Midnight Bisou (Midnight Lute), whose lone 2019 defeat came at the hands of Blue Prize (Arg) (Pure Prize) when given too much to do in the GI Longines Breeders' Cup Distaff. A homebred for Gary and Mary West, Maximum Security rose from $16,000 maiden claimer to first past the post in the GI Kentucky Derby, only to be controversially disqualified to 17th. He added the GI Haskell Invitational S. in the New Jersey swelter in July, and subsequently missed the GI Travers S. and GI Pennsylvania Derby, but comprehensive wins in the GIII Bold Ruler H. and over GI Breeders' Cup Dirt Mile hero Spun to Run (Hard Spun) in the GI Cigar Mile H. earned him a spot on the podium. Maximum Security is also favored to best MGISW Omaha Beach (War Front) and Travers winner Code of Honor (Noble Mission {GB}) in the 3-year-old male division. West sold a half-interest in Maximum Security to Coolmore this past Thursday, but he stays in training into the new year.

In the female counterpart, Covfefe (Into Mischief) looks to have an edge over 'Rising Star' Guarana (Ghostzapper) and GI Kentucky Oaks victrix Serengeti Empress (Alternation) and is a strong chance in the female sprint division as well owing to her powerful success against older rivals in the GI Breeders' Cup Filly and Mare Sprint.

While the older turf male Eclipse is a fait accompli, the turf female division is very much up for grabs, with three viable candidates. Reigning champion Sistercharlie (Ire) (Myboycharlie {Ire}), owned by Eclipse finalist Peter Brant, was undefeated in three starts in 2019 before being beaten into third in defense of her title in the GI Breeders' Cup Filly & Mare Turf. That opened the door for her Chad Brown stablemate Uni (GB) (More Than Ready), who defeated Got Stormy (Get Stormy) and a group of males in the GI TVG Breeders' Cup Mile. The latter enhanced her chances with a season-ending victory in the GI Matriarch S. Got Stormy is owned by Eclipse finalist Gary Barber, who was also represented in 2019 by the likes of GI Preakness S. winner War of Will (War Front).

Vino Rosso (Curlin), demoted to second behind Code of Honor in the GI Jockey Club Gold Cup before exacting his revenge with a sound victory over McKinzie in the GI Breeders' Cup Classic, faces the latter and Mitole in the older dirt male division.

The Eclipse Award ceremonies are set for Thursday, Jan. 23 at Gulfstream Park. The horse among the three finalists to have received the highest number of first-place votes takes home the Eclipse. The full list of finalists is as follows:

Horse of the Year:

Got Stormy (Get Stormy)