Bricks and Mortar Named Horse of the Year 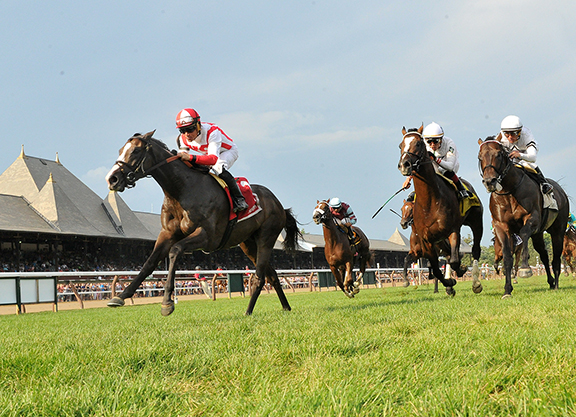 Having been nursed back to health over much of calendar year 2018 after being treated for a potentially career-ending case of stringhalt, Bricks and Mortar was an unstoppable force last year and became the first Horse of the Year for trainer Chad Brown Thursday evening. He was also a unanimous winner of the Eclipse Award for older turf male, the third in five years for a Brown trainee (Big Blue Kitten, 2015; Flintshire {GB}, 2016).

Underfoot conditions were of no concern to the $200,000 Keeneland September graduate last season, as he commenced his unbeaten streak with a smooth victory over Magic Wand (Ire) (Galileo {Ire}) in the inaugural GI Pegasus World Cup Turf S. over yielding Gulfstream turf in January, then sat up on the 'speed' in a paceless renewal of the GII Mervin Muniz Memorial H. at the Fair Grounds and managed to gut it out late. He overcame another soft pace in the GI Old Forester Turf Classic in May, added a 1 1/2-length defeat of stablemate Robert Bruce (Chi) (Fast Company {Ire}) in the GI Manhattan S. the following month and finished fast to best Magic Wand in the GI Arlington Million.

After a time of indecision as to which Breeders' Cup race might suit him best, Bricks and Mortar ultimately went for the Turf. He proved wrong those who doubted his ability to stay the 12-furlong trip, leading home a 1-2 finish for his sire over United with G1 Investec Derby hero Anthony Van Dyck (Ire) (Galileo {Ire}) close up in third.
Bricks and Mortar stands his first year at stud at Shadai Farm in Japan in 2020.

Accepting the Award (Horse of the Year)…

“Thank you for this honor. Bill and I want to congratulate the owners of Maximum Security and Mitole for incredible campaigns. They were all great horses and worthy candidates. Horse racing has a way of getting in your blood. I know it did with me as a teenager at Pimlico. I love so much of this sport. The perpetual puzzle of handicapping a winner. Enjoying watching a stretch-long battle between two equine athletes who wouldn't yield. The anticipation of a top race at an elite meet. The big races you attended and remember like they were yesterday are mileposts on life's journey. I know horse racing got into the blood of Chad Brown as he was growing up in Saratoga. It's never luck when you see Chad in the winner's circle. It's intensity, preparation, a man, a plan, a highly functioning team. I believe Chad and I are a great team, but I mean that in the sense that Chad and anybody are a great team. Chad, in effect, manages my stable, most of the buying and selling, the training facilities, the breeding decisions. I want to acknowledge the people here with me tonight. My long-time partners, Bill and Gloria Lawrence, what a great partnership. Nick and Jacqui de Meric, who buy, break and train many of our babies. My friend Andy Serling and of course, my wife Beth, who's been on this journey with me the entire way. I never thought we'd ever have a chance to win this award. Bill and I are so grateful to the voters for this incredible, once-in-a-lifetime honor.” –Seth Klarman of Klaravich Stables, co-owner

“Bricks and Mortar has been the thrill of a lifetime for Bill [Lawrence] and me. Bricks ended his career with 11 victories from 13 starts. He was within a length and a half of being undefeated. In 2019 alone, he was six-for-six at six different tracks, five of which were Grade I wins. In his career he won a staggering $7-million in purses. We ran him against the best competition we could find. He danced every dance. These accomplishments are largely due to the efforts of Chad Brown. Chad is an incredibly gifted horseman and he managed this horse with great patience and skill. Irad Ortiz rode this horse confidently and masterfully, the perfect rider for this perfect season. I want to thank the voters for recognizing the achievements of this truly exceptional equine athlete.” –Seth Klarman of Klaravich Stables, co-owner

I remember the last time I saw him at Stonestreet, he was galloping in a big 50-acre field, up and down a hill. I remember standing up there with Ian Brennan watching him float over the ground and we said, 'Man, would this horse look good in Europe.' He was just one of those agile horses, it didn't matter he could switch leads on a nickel and handled the hills up and down. You could tell that this was a different athlete. He was a different kind of horse. He was one of those rare horses, pretty elite horses, and he was like that from the get-go and he delivered every time. His determination and his courage were extraordinary.
Like Giant's Causeway, they used to call him the Iron Horse, he loved to fight and he knew where the wire was. He was just a very gutsy, courageous and determined horse. He was the horse of a lifetime, really. I'm sorry he's not here with us in Kentucky where we could see him and breed to him. I think the Japanese are looking good there.” —bloodstock agent Mike Ryan, who purchased Bricks and Mortar as a yearling for Klaravich & Lawrence

This story was posted in Shared News and tagged Bricks and Mortar, Chad Brown, Eclipse Awards, Horse of the Year, Irad Ortiz.