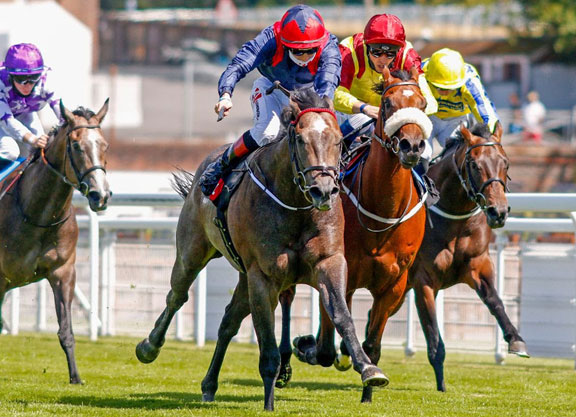 DONCASTER, UK—This, too, shall pass. At a time when we can all benefit from a length of perspective, there are worse places to come than here. True, those who arrive with no knowledge of the town's venerable Turf history must be perplexed by the names chiselled onto posts in the revamped forecourt of the railway station: Blair Athol, Robert the Devil, Ormonde, Hyperion. To those in town for the Goffs UK Breeze-Up Sale, however, these and all the other St Leger winners so honoured remind us that our stewardship of the breed is fleeting; and that even a global pandemic must take its place among many other crises absorbed by our sport over the past three centuries or so.

So while it remains poignant to see the condition of some of the mansions built along South Parade to accommodate grandees of the Victorian Turf, collectively we persevere in the hope of better times ahead. And even after just one sale, the European breeze-up circuit does feel as though it might be rocking back towards an even keel.

Last year, this was the sector first broadsided by the pandemic, and this auction, which prides itself as a source of horses precocious enough to have Royal Ascot in mind, was only salvaged for July. The Craven Sale at Tattersalls last week offered one or two very auspicious markers: not just a very purposeful clearance rate (88%), for obvious reasons a familiar feature of an uncertain trading environment over the past year, but more importantly a sturdy middle market. So while there were no fireworks, the median was historically competitive (68,000gns, compared with a range of 70,000-77,500gns during the first four of the five years of the bull run that started in 2014) and shored up precisely the area that often feels most porous at bloodstock sales. So if trade on Thursday can consolidate that initial impression, then vendors and hosts alike will surely be well satisfied.

On the eve of the sale John Cullinan of Horse Park Stud, who has done such sterling work at the helm of the Breeze-Up Consignors' Association, had a grimly humorous analogy for the sector's exposure to the first wave of the pandemic.

“We were the canary in the mine for the bloodstock industry last year,” he said. “So I think everyone had a big sigh of relief just that we got through it, and survived in such difficult circumstances. We were the pathfinders for all the protocols and precautions, and I think it was a help that we are relatively small, in terms of numbers. That meant that the sales companies had been able to test and prepare everything before the autumn. So while it was stressful for everybody, it was great having somewhere to trade—as it is now. And it says it all that I think every one of the breeze-up consignors, to a man, was back in play in the autumn.”

“Though one thing that was notable was that there weren't many who wanted to buy big numbers,” he cautioned. “There were a lot of clients on the ground who had only one or two to buy. That meant orders got filled easily, and it got a bit patchy at times. But overall I thought the standard of horse was good, the standard of breeze was good, and if we didn't hit the heights of previous years the overall spread through the market was encouraging.”

It's an ill wind that blows no good, and consignors contrived to derive some underlying positives even from the traumatic market of 2020.

“What was interesting, doing our analysis afterwards, was that we discovered that we had increased the buying bench quite considerably,” Cullinan said. “Which means more people are buying breeze-up horses than ever before. We did lose some of the big names for various reasons, especially from overseas because of travel restrictions. But despite losing a cohort that between them spent £10 million the previous year, the average price only dropped by a couple of thousand quid.”

And, necessity being the mother of invention, there have even been some incidental benefits.

“To be fair, the sales companies were fantastic,” Cullinan said. “The online element had to go from nought to 100 very quickly, and it was a learning curve for everybody, but now you'd say it's something that's here to stay. And among the vendors, even the Neanderthals like myself are on social media, filming them at home, putting up videos online pre-sale. It's all optional stuff, but people are also putting up vets' X-rays and scopes. There are different ways of doing things, and hopefully it's helping to engage people from afar.”

Less helpful, he feels, were misplaced theories about such private sales as took place when the whole calendar seemed in question.

“Some people had a misconception that we were selling our best horses at home,” Cullinan said. “That was completely untrue. The fact is that people sold horses at all ranges. We sold only two, and one of those was for eight grand. They weren't being cherry-picked. Everyone was very conscious of coming back to the sale, and didn't want to do that with half a draft. Certainly I don't think there's much hunger to do more of that: it was a unique year, and the catalogue sizes are well up to normal.”

The silver lining to reduced gains was that the wider market, which had arguably appeared to be overheating anyway, made restocking somewhat less expensive.

“The yearling market was softer, except Book II which was very strong,” Cullinan said. “If you had your shopping done before then, it was a big advantage. But if you were behind coming to Newmarket, you were in bother. But being the fools that we are, I think the majority of us ended up spending every bit as much.”

There were mixed feelings on the grounds about the insertion of an entire day for viewing between Tuesday's breeze and the single-session sale. Those in favour included those having to liaise across time zones, as well as trainers who had been able to work horses before attending a breeze show that did not start until noon; and again the next morning before returning to view. On the other hand, not least with so many obliged to prospect remotely, the site was so quiet as to have a mild air of lethargy. Regardless, while conditions were quick enough for the time of year—”lively but safe” in one typical verdict—there were few reports of horses tender after their breeze.

This sector has certainly had a pretty wild ride over recent years. There were boom times, for sure, but there were also times when opportunists menaced that success by treating these sales as a sieve for unwanted yearlings. These learned the hard way that the sector has thrived only because of the professionalism and focus of both consignors and prospectors. The next temptation, despite the invariable fate of all those who have ever tried to reduce the Thoroughbred to a system, was to trust blindly in timing and stride data. But then, while that trend was still evolving, out of a clear blue sky came Covid.

But the breeze-up consignors are a resilient crew: in other words, well equipped canaries. “Risks are high,” Cullinan acknowledged. “Sometimes the economics can be tough. If you buy an expensive yearling and reveal that it's ordinary, or has an issue, there is no hiding place. But that's what we do. Our product has added value to the raw yearling. We reveal ability, or lack of it; action; attitude; soundness; wind. So we feel we should be getting a proper mark-up: one must balance out the other, or we're out of business.

“But we feel we have made a bit of ground in recent years. First by highlighting the broad appeal of the product. The perception was that we were all about five and six furlongs, and early 2-year-olds. In reality, we're about decent, sound racehorses at all trips: from Brando (GB) (Pivotal {GB}) to Trip To Paris (Ire) (Champs Elysees {GB}), durable old sprinters and Cup horses. I think people are more aware of that now, and we see that at the door as well. We have horses that wouldn't be spectacular breezers, time-wise, but still have their admirers.

“And then there's the durability of the European product. We all know the number of horses bought to go breezing in America, that don't make it into a catalogue; the number that make it into the catalogue and don't make the sale; and the number that make it to the sale but don't make it to the ring. It's a big attrition rate, over there. Here, far more get to the sales, and far more get through the process, and their careers are longer. A lot of it is because we aren't producing for the clock, and the clock alone. Because of that we can buy different kinds of horses, and don't feel we have to force them.”

The quest for a new Dream Ahead (Diktat {GB}) or Quiet Reflection (GB) (Showcasing {GB}), among the star graduates of this sale, or a new Steel Bull (Ire) (Clodovil {Ire}), who was bought here last year for just £28,000 before winning the G3 Molecomb, begins at 10 a.m.