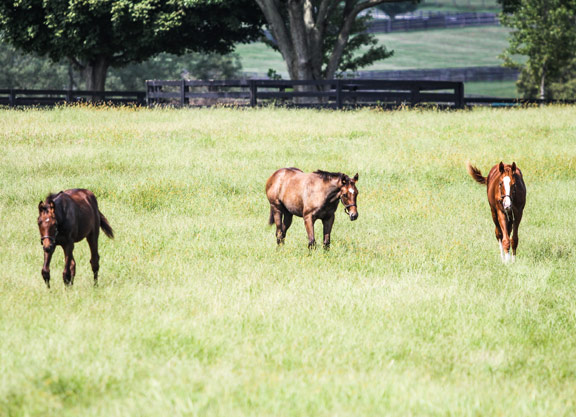 Throughout the COVID-19 pandemic, there has been a lot of discussion and reporting on how quarantine, shutdowns, safety protocols and the shift in the sales calendar has affected trainers, backstretch workers, owners and sales companies. However, very little has been said about how it affects the breeders, who are the backbone of the Thoroughbred industry.

Only one 2-year-old sale, the OBS March Sale, has been held so far this year with many of the other juvenile sales being postponed or even canceled. Fasig-Tipton has combined their July, Saratoga and New York-Bred sales into one two-day auction to be held in Kentucky Sept. 9, just days before the Keeneland September Sale.

It is important that consignors are able to unload their 2-year-old stock prior to the yearling sales as pinhookers make up a good portion of that market. Combine that with the absolute certain downturn in the economy caused by the nationwide shutdown of businesses and commercial breeders are left with plenty of concerns heading into the second half of the year.

“I think we are just like everybody else right now,” said Jane Lyon, owner of Summer Wind Farm in Georgetown, Kentucky. “Nobody knows what is going to happen. I have resigned myself to the fact that this is not going to be a profitable year in all likelihood because of all the switching around [of the sales schedule] and people not knowing what is going on as far as racing and what they are going to do with their 2-year-olds; the horses they have in training; and their yearlings, if they buy now. I think people are going to be cautious. I think it is going to hurt a lot of smaller breeders and pinhookers. I think it already has. They may not be looking to buy more horses this sales season. I think we are all in a wait-and-see position.”

Summer Wind houses a star-studded band of broodmares with foals and yearlings whose pedigrees are littered with black-type. Lyon typically keeps a few fillies from each crop to carry on specific bloodlines and, given the current economic climate, she will likely be inclined to keep more than usual this year.

“I am always cognizant of what my horses are worth to me as opposed to what they might bring at a sale,” Lyon said. “I had already planned to hold back some of my fillies for pedigree reasons and the pandemic just makes me more comfortable doing that right now. I plan to put horses in both of the sales [in September], but not as many, perhaps, as I have in the past.”

David Anderson, who owns and operate Anderson Farms in Ontario, Canada, consigns his entire crop each year and still plans to bring all of his yearlings to market this term despite the uncertain times.

“Looking forward, it is definitely unsettling and unnerving not knowing what to expect going into the fall,” Anderson said. “There is no question there will be a downturn in the market. There has to be. First thing’s first, these 2-year-old guys need to get their money back. They are always the backbone of the yearling sales.”

The lifelong horseman continued, “At Anderson Farms, I sell everything or at least try to. We will be taking all of our yearlings to market. It is the horse business. It is a game where everybody seems to find money somewhere to buy a nice horse. There is going to be more polarization in an already polarized market, but if you bring the right horse, I think you are still going to get paid. That is definitely going to hold true at the upper end. It will be a buyer’s market, but everybody is going to be looking for a deal, no matter what level.”

Unlike Anderson Farms and Summer Wind Farm, Ocala Stud sells all of its homebreds, as well as several client horses, as 2-year-olds instead of yearlings, targeting the three OBS sales, so they have felt a more immediate impact than others.

“These 2-year-olds that we have, have been a three-year investment really because we are breeders and we carry our product to the 2-year-old market,” Ocala Stud’s David O’Farrell said. “We make our living, really, in the spring time. We are a full-service facility. We stand stallions and we care for 100 broodmares. We also have a training operation, so spring time is always the busiest and most stressful for us. So, when the pandemic hit, we were really just getting into the height of the season.”

He continued, “As far as the sales go, we are taking a wait-and-see approach. We have 18 entered in the OBS Spring Sale and another 12 or 15 for the [OBS] July Sale. We are hopeful. We will be there, so hopefully the buyers will be too. Here in Ocala it is a little bit different than Kentucky and the Northeast. We are opening up here in Ocala. As far as people traveling in for the sale and what their mind set and risk limit is, I don’t know. So many of our buyers come from New York, California and Kentucky and they are going to have a different mind set than us local folk trying to sell horses here. We are going to be there [at OBS] and we are going to be ready.”

Ocala Stud is also a training and breaking facility, so they work with many juveniles headed right to the racetrack rather than the sales. With many tracks shutdown, their juvenile trainees have stuck around Ocala longer than usual.

“Usually around the [OBS] April Sale, we are shipping a lot of horses to New York and Kentucky and wherever else,” O’Farrell said. “But we still have probably 70% capacity at our training center, maybe 80%, so we are still quite full. I had six ship out earlier this week and have a few more on the schedule. People are starting to make plans for Kentucky and I had a few go to New York and South Florida. We are getting to the point where people are starting to get their ducks in a row and make their stall allotments. I would expect to ship quite a few horses out in the next couple of weeks, but horses are definitely staying longer than usual. We are usually cleaning out by this time of the year.”

Another financial issue facing breeders during these uncertain times is stud fees. Many of them had already bred or booked most of their mares by the time the coronavirus hit, but the effects of the pandemic are likely to have a significant impact on next year’s stallion choices.

“It hasn’t had an immediate impact, per say. I think most breeders have done their budgeting for the year,” Anderson said. “As far as paying stud fees right now, we should already have that in the bank to get us through to the fall sales. In terms of bookings for this year, I think most people booked and bred a lot of mares prior to COVID. If I had a crystal ball, I think I would have pulled back a little bit on the amount of money I spent on stud fees. I think next year we are definitely going to have to see a decrease in stud fees based on what the market does during the remainder of this year.”

The O’Farrell family stands 12 stallions at their Ocala farm and were happy with their breeding season this year.

“Breeding season has gone very well,” O’Farrell said. “I have not seen much of a pullback on breeders from supporting the horses. It has been surprisingly good. People are breeding on spec–they don’t have to pay the stud fees up front–so they can breed the mare and it is payable in a year’s time. People have not changed their mind set a whole lot, at least not from what I can tell, so I am very pleased with all that.”

Businesses across the country have been forced to institute new safety protocols during the pandemic in keeping with the CDC guidelines, such as wearing masks and gloves and remaining six-feet apart. Breeding farms are no exception.

“We put all the recommended protocols in place,” Lyon said. “We ask people to observe the six-foot rule. I have masks and gloves. We are not going places outside of the farm for the most part. The only places I have been are the grocery store and the bank drive-thru. We are all pretty much being very careful about where we go and how close we get to other people.”

In that vein, Lyon was also forced to cancel a trip to Ocala to check on the 2-year-olds she has in training, all of whom are staying put at their respective farms until more racetracks return to live racing.

“We are waiting for the tracks to reopen with the ones that we have in training and our 2-year-olds,” Lyon said. “We had thought about going to see our horses at Eddie Woods and a few other places in Ocala where I have other horses I own in partnership. We have decided to put that off. Although it is not mandatory here right now, the recommendation is that if you go out of state, you do a 14-day quarantine when you return. So, it was just not worth it. We get reports and talk to the trainers on the phone. We have some people in Florida who will go look at our horses for us. As much as I wanted to go, we decided it would not be smart to do so right now.”

While Summer Wind Farm is a private nursery that houses only Lyon’s mares, Ocala Stud usually has a lot of foot traffic from clients on the training side of their business and also have mares coming in and out to be bred.

“We used to get quite a bit of traffic and visitors this time of year,” O’Farrell said. “Since the pandemic hit, the first week or two, we had some visitors that we had to turn away, but then people quit coming by. We just put some measures in place like everybody else, no one in the barns and trying to keep paperwork and office traffic to an absolute minimum. We are trying to keep it as clean and limited as we can.”

Canada has enforced similar safety protocols to the U.S. during the coronavirus pandemic, so Anderson Farms has also implemented changes to the daily routine.

“Canada is like the little brother to the U.S. Whatever happens in the U.S., happens here,” Anderson said. “We are not allowing any visitors. When we are shipping horses or have a commercial carrier come in, we are not getting near the drivers or touching shanks and halters, etc. I am really cognizant of keeping my staff healthy. We are a small operation and we just can’t afford to lose one person to one day of sickness, let alone a pandemic.”