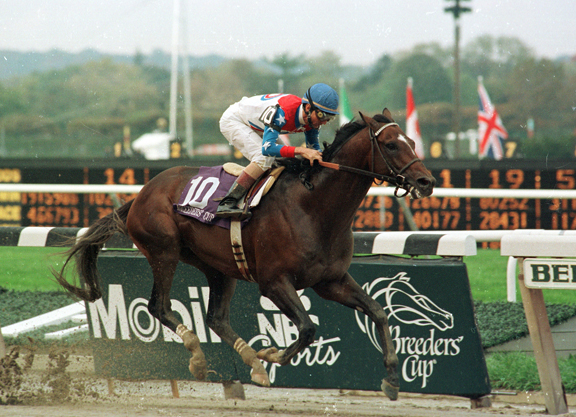 The countdown is running to a close for the 2020 Breeders' Cup World Championship and perhaps no one has more Breeders' Cup memories to share than Hall of Fame jockey Jerry Bailey, who made an astounding 15 trips to the Breeders' Cup winner's circle during his 31-year career, including a record five wins in the Classic.

Calling in via Zoom as the Green Group Guest of the Week for Wednesday's TDN Writers' Room podcast presented by Keeneland, Bailey spoke on some of his favorite Breeders' Cup moments, as well as a few of his top picks going into this weekend's meet.

When asked which horse he would choose as his Classic mount, Bailey wavered between a few different contenders.

“I would probably choose Authentic (Into Mischief), but it's a toss up between Improbable (City Zip) and Authentic,” he said. “If you drill down, I think Authentic is the true speed of the race and he will make the lead. I think he's super dangerous doing that. I think it comes down to the trips. Who gets the most comfortable trip and who gets the trip that they like and they're best at? I think it's most likely either Authentic on the lead or Improbable in the three path stalking just a few lengths off the lead.”

This year will mark the 25th anniversary of Bailey's win in the Classic aboard Cigar, a race that was also the 12th of 16 straight victories for the Hall of Fame duo. Cigar's unforgettable career was recently relived in a TDN Look feature.

Bailey spoke on the pressure of being the regular rider for such a beloved racehorse.

“There is pressure on any rider that walks out on the heavy favorite, no matter who it is or what race it is, the first race or the last. So yeah, I felt it on him pretty much every time. But he was a horse that I knew I could get out of any trouble I ever got in. But my philosophy was, don't get in trouble. If you think you're on the best horse, then you put him in position to win. And if he's good enough, he's going to win.”

Another memorable Classic for Bailey was when he pulled off a 133-to-1 odds win aboard French import Arcangues in 1993.

“I knew nothing about the horse,” he said. “I didn't even get the mount until about five days before the race. So I thought okay, I'll talk to the trainer when I walk in the paddock. He'll kind of clue me in. But I couldn't find [trainer] Andre Fabre and I didn't know what he looked like. Actually, I had never met him. There were a thousand people in the paddock, so I couldn't find him. So my next thought was during the rider's up, I would talk to the groom. And the groom told me everything I needed to know- in French. And I didn't understand it. So I left the paddock on the horse not knowing anything other than what I could glean from the racing form.

Now serving as a spokesperson for the industry as a leading racing analyst for NBC Sports, Bailey gets a unique perspective from a fan's point of view on a day-to-day basis.

“The biggest complaint I get from fringe fans is that it's too boring. It's too slow,” he said. “I mean, we're in a world that if it takes 30 seconds to download something, we're frustrated. So the time between races is kind of a drag to a lot of people. We go to a lot of Heat games and you're entertained at every time out, from the moment the whistle blows until they start again. It's a little different, obviously, but I think if we could provide some entertainment as informational vignettes about the jockeys, the horses, the trainers and the owners, we have to step it up a little bit because we're playing catch up from a long time ago.”

Elsewhere on the show, in the West Point Thoroughbreds news segment, the writers shared their hottest tips looking ahead to this weekend's racing. Is Princess Noor (Not This Time) unbeatable in the Juvenile Filles? Will the European invaders dominate in the Mile or can a U.S.-based runner get the win? And will the Distaff turn out to be a match race between Monomoy Girl (Tapizar) and Swiss Skydiver (Daredevil)? The writers examine these questions and more.  Click here to listen to the audio version.