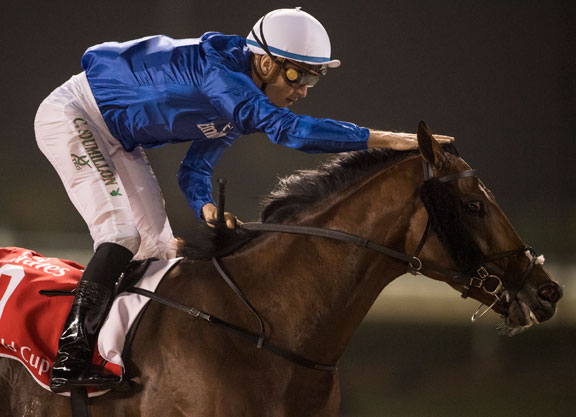 Plans are currently on hold for dual G1 Dubai World Cup winner Thunder Snow (Ire) (Helmet {Aus}) after he was scratched from the GI Whitney H. on the day of the race as he spiked a temperature. He returned to Saeed bin Suroor’s stable in Newmarket on Tuesday–and while the Breeders’ Cup is still on the agenda, where he runs before then is up in the air.

“He got back from Saratoga today,” said Bin Suroor. “The horse ran a temperature, which was why we had to scratch him from the race. There are no plans for him at the moment–we’ll just keep monitoring him and see how he is doing and make a plan when we think he’s better.”

Patience is likely to be needed in the meantime.

Bin Suroor added, “The Breeders’ Cup is obviously the plan–and I’d like to get a race in somewhere–but until we can start training him again, we don’t know where that will be. It was just unlucky. Before the race, he had been training really well, and he would have had a good chance in the race.”

“After he went to Australia, we gave him a break because he’d had a hard season,” said Bin Suroor. “He’d run in Dubai, England, Germany and Australia. He’s back in training, and we’ll start looking for races for him in September time. He could start off in England–but there are races abroad for him in Europe.

“We’ll keep all his options open, but I don’t think we’ll take him back out to Australia this year. I think it’s more likely we’ll look at Canada or America for him. We’ll see how he is going–so far he is moving well, looks healthy and is working really nicely.”

“Royal Marine has been gelded,” said the Newmarket trainer.

“He’s been disappointing. He just isn’t showing what he showed last year. We took him to Dubai and thought he might not have liked the dirt–but [then] he disappointed in the Guineas and in France. I still believe he has the class–his form is in the book.”