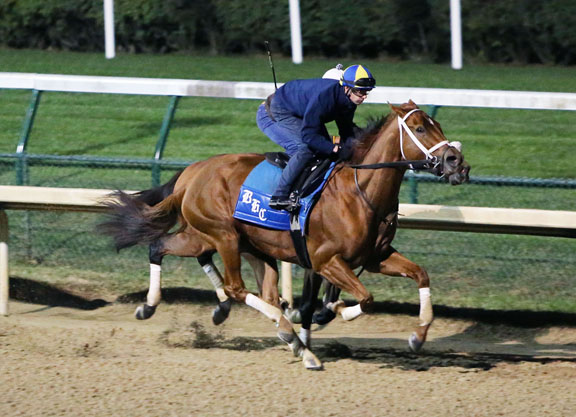 “Anyone you put with Monomoy, she seems to always out work them,” said Florent Geroux, the chestnut’s regular partner. “She’s worked with a lot of really good horses in the past and Owendale is a really good horse. She just always gets the better of them.”

Added trainer Brad Cox, “There’s not much really to say about her other than she’s just really, really, really good right now. We’ll see what the future holds for her, but as a 5-year-old, she’s showing how mature she’s become.”

“I wish I would’ve added the blinkers in start 19 instead of 29,” Cox joked. “He’s really turned the corner since we put them on for the [Sept. 12 GIII] Kentucky Turf Cup Classic last out. This year has been interesting with this horse. He ran a good race in June (in the $100,000 Louisville) and we ran him back in the Elkhorn where he didn’t run bad but I had the not-so-great idea of sticking him on a plane and running six days later at Monmouth (in the Grade I, $315,000 United Nations). After he finished fourth that day, I said we have to make a change and add blinkers. It really worked out in the Kentucky Turf Cup, which in and of itself turned out to be a really interesting race when there was a torrential downpour before the running of the race.”

Also in the first set of Cox horses was GI First Lady S. runner-up Beau Recall (Ire) (Sir Prancealot {Ire}), who appears likely to face the males in the GI Breeders’ Cup Mile. She worked by herself through fractions of :13.20 and :25.60, galloping out five furlongs in 1:03.80.

Among the leaders of this season’s crop of sophomore fillies, the Oct. 3 Classic winning Swiss Skydiver continued her march toward Breeders’ Cup day with a four-furlong move in :47.80. With Robby Albarado in the saddle, the Ken McPeek-trained filly breezed through initial fractions of :12.40 and :24.40.

“She was pulling today and feeling really good with the cool weather,” said Albarado. “No complaints, she feels amazing…I’m going to gallop her the last five days before the race as I did at Pimlico. We’re going to see how she’s doing and make a decision [about the Classic or Distaff] from there.”

Tom’s d’Etat, who has been off since a troubled third in the Aug. 1 GI Whitney S. in early August, posted a solid six-furlong move under jockey Miguel Mena in preparation for the GI Breeders’ Cup Classic. Breezing in tandem with Oak Hill (Distorted Humor), last year’s GI Clark winner worked six panels in 1:12.80, with internal splits of :12.20, :23.80, :47.20 and 1:00. Oak Hill completed five furlongs in 1:01.

“The schedule with the pandemic got a little awkward with everyone,” trainer Al Stall Jr. said. “The races didn’t quite work out in the calendar quite right for him. My gut feeling said to go into the Classic fresh anyway and when the last round of stakes races came out, I didn’t like the way they were placed so we stuck with the plan to train up to the race.”

The fastest recorded five-furlong dirt breeze of the morning was registered by Classic contender By My Standards (Goldencents), who completed the task in a crisp :58.60. Rolling through initial fractions of :12, :23.40 and :34.80 with jockey Gabriel Saez aboard, the winner of the Sept. 4 GII Alysheba S. galloped out six furlongs in 1:11 and rounding out seven panels in 1:24.80.

“Last week was the first work we did a little bit something serious with him [since he won the Alysheba],” said trainer Bret Calhoun. “He was full of energy and bounced around great after it. It’s been a different year for sure losing a few races here or there. We were fortunate to have [the Alysheba] on the undercard of the rescheduled Derby. We probably could’ve shipped somewhere around the country, but our goal was how to get him to the Breeders’ Cup Classic. We decided to stay here run in the Alysheba and point to the Breeders’ Cup from there.

At Keeneland in Lexington Saturday morning, a trio of hopefuls also continued preparations for the Breeders’ Cup. Chief among them was Jesus’ Team (Tapiture), who breezed five panels over a muddy track in 1:00.80 in advance of the GI Breeders’ Cup Dirt Mile and Grade I winner Ollie’s Candy (Candy Ride {Arg}), who is slated to contest the GI Breeders’ Cup Distaff.

“It was a good work and he will come back again next Saturday [Oct. 31] and work a half-mile,” said trainer Jose D’Angelo. “I have only been in this country a year. I have not been here to race, but I have been to the sales.”

Ollie’s Candy, runner-up in her latest start in the Oct. 4 GI Juddmonte Spinster S., will try to improve on a fourth in last season’s Distaff. The first worker over the freshly harrowed track at 7:30 a.m., the John Sadler-trainee posted a bullet five furlongs in :59 over a muddy track. The 5-year-old reeled off internal splits of :23, :47.40, galloping out six furlongs in 1:12.60. Juan Levya, assistant to Sadler, was aboard.

“She got over the track really well and galloped out well,” Leyva said.

Ollie’s Candy has been cataloged as a racing or broodmare prospect (Book 1, Hip 83) in Keeneland’s November Breeding Stock Sale. The sale begins Nov. 9.

Following Keeneland’s second morning renovation break Saturday, Bellafina (Quality Road), who is expected to make her next start in the GI Breeders’ Cup Filly and Mare Sprint, worked five furlongs on her own in 1:00.60 with Nick Bush aboard.