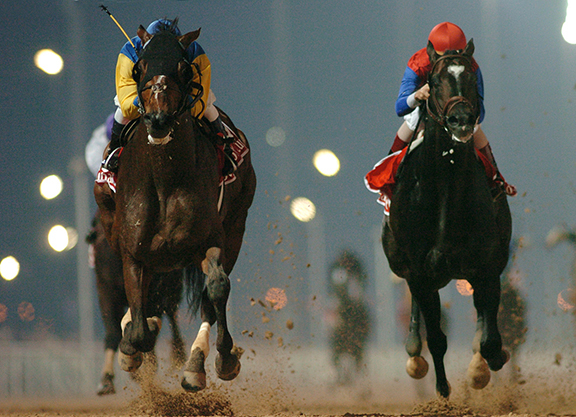 Pleasantly Perfect (Pleasant Colony–Regal State, by Miswaki), who completed a historic Breeders' Cup four-timer for trainer Richard Mandella in the 2003 GI Classic and went on to sire a trio of top-level winners, passed away Wednesday in Turkey. He was 22 years old and died of natural causes.

Bred in Kentucky by Clovelly Farms, Pleasantly Perfect was purchased by Gerald Ford's Diamond A Racing Corp. for $725,000 at the 1999 Keeneland September sale. Turned over to Mandella, the strapping bay won back-to-back runnings of the GII Goodwood Breeders' Cup H. in 2002 and 2003 before upsetting Medaglia d'Oro (El Prado {Ire}) at 14-1 in that year's Classic (see below) at Santa Anita, adding to victories by Action This Day (Kris S.) in the Juvenile, Halfbridled (Unbridled) in the Juvenile Fillies and Johar (Gone West) in the Turf (dead-heat). There were just eight Breeders' Cup races run at that time.

Pleasantly Perfect slugged it out again with Medaglia d'Oro in the 2004 G1 Dubai World Cup, prevailing by a hard-fought three-parts of a length (video) before adding the GI Pacific Classic. He was retired to Lane's End after finishing third to Ghostzapper in defense of his Classic title with nine wins from 18 starts and earnings of nearly $7.8 million.

Pleasantly Perfect sired 10 U.S. crops, good for 18 black-type winners, including GISW Whitmore and GI Breeders' Cup Filly & Mare Turf upsetter Shared Account, dam of reigning GI Breeders' Cup Juvenile Fillies' Turf winner Sharing (Speightstown). Rapid Redux, a member of his first crop of foals in 2006, was the recipient of the Eclipse Special Award in 2011 after compiling a 22-race winning streak. Pleasantly Perfect was exported to Turkey in late 2014, where he has sired 25 winners, including two black-type winners, from two crops to race. He was pensioned from stud duties in the summer of 2019 and his final crop of foals was born this year.