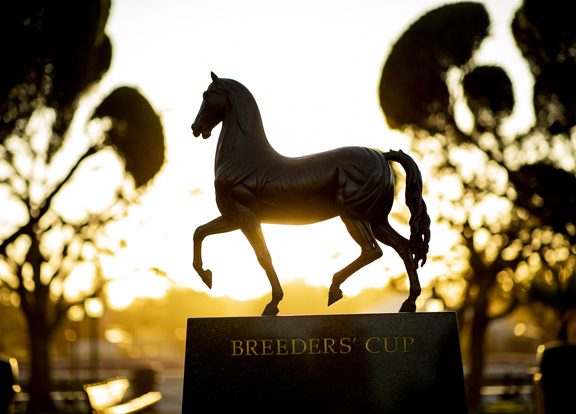 Led by the 145th GI Preakness S., the G1 Irish Champion S. and G1 Qatar Prix de l'Arc de Triomphe, a total of 44 automatic berths into the 37th Breeders' Cup World Championships will be up for grabs over the next two months as Breeders' Cup Ltd. released its schedule of Breeders' Cup Challenge Series races for September and October.

The Breeders' Cup Challenge, now in its 14th year, is an international series of stakes races whose winners receive automatic starting positions and fees paid for a corresponding race in the Breeders' Cup World Championships, which is scheduled to be held Nov. 6-7 at Keeneland Race Course in Lexington, Ky.

“Win and You're In” qualifiers will be contested in Brazil, Canada, England, Ireland, France and the U.S. over the September-October time frame, including 27 Grade or Group 1 stakes.

Among the Breeders' Cup Challenge Series racing highlights are:

Three “Win and You're In” automatic qualifiers for the $7-million GI Longines Breeders' Cup Classic, featuring the Preakness at Pimlico Oct. 3, the first Triple Crown race to be in the Breeders' Cup Challenge Series. Bookended around the Preakness are the GI Awesome Again S. Sept. 26 at Santa Anita Park and the GI Jockey Club Gold Cup at Belmont Park Oct. 10.

As part of the enhanced benefits to horsemen competing in the series, Breeders' Cup will pay the entry fees and guarantee a starting position in a corresponding Championships race for winners of all Challenge races. The Challenge winner must be nominated to the Breeders' Cup program by the Championships' pre-entry deadline of Oct. 26 to receive the rewards, and those rewards must be used in the year they are earned.