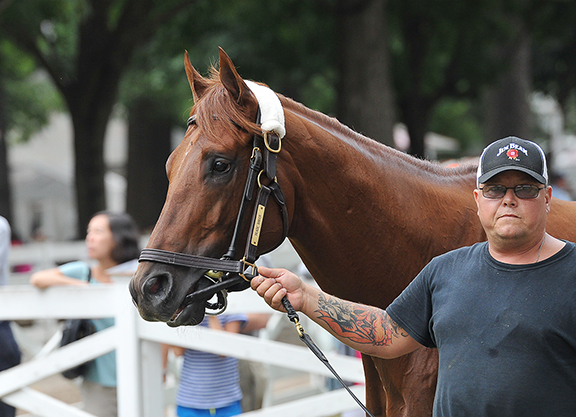 GSW Breaking Lucky (Lookin At Lucky–Shooting Party, by Sky Classic) has been retired from racing and will stand stud at Blue Star Racing in Louisiana. His fee will be announced at a later date.

“This is an opportunity for the breeders in our area to tap into a sire line that is red hot in Lookin At Lucky. You also are tapping into a very deep female family as well,” said Blue Star Racing owner Dex Comardelle.

Initially campaigned by Gunpowder Farms and trainer Reade Baker, Breaking Lucky defeated MGISW Shaman Ghost (Ghostzapper) in Woodbine's 2015 Prince of Wales S. and won the 2016 GIII Seagram Cup S. Second to future Horse of the Year Gun Runner (Candy Ride {Arg}) in that year's GI Clark H., the chestnut was bought into by Reeves Thoroughbred Racing, R.A. Hill Stable, West Point Thoroughbreds and Eric Young to run in the inaugural GI Pegasus World Cup.
Breaking Lucky was third to Gun Runner in both the 2017 GI Stephen Foster H. and GI Whitney S. Transferred to George Weaver for 2018, he won a Gulfstream optional claimer in December and was second in this year's GIII Fred W. Hooper S. The 7-year-old retires with a record of 27-4-6-6 and earnings of $1,196,376.