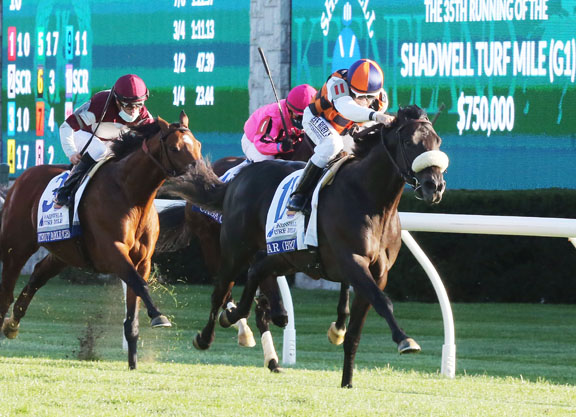 Undefeated in three Argentinian starts, including two daylight wins at Group 1 level, and competitive in stakes company in this country, Ivar (Brz) (Agnes Gold {Jpn}) settled in the latter third of the field, was ridden quietly into the final 2 1/2 furlongs by Joe Talamo and exploded through the Keeneland stretch to up-end a high-class field in Saturday's GI Shadwell Turf Mile, locking up a spot in the gate for the GI Breeders' Cup Mile over the same course and distance exactly five weeks down the line.

Drawn widest in a field reduced to nine by a pair of scratches–including GI Fourstardave H. winner Halladay (War Front)–Ivar was getting blinkers off for the Shadwell and settled off the rail in about seventh position passing halfway as Casa Creed (Jimmy Creed) set the pace in advance of the lightly raced Born Great (Scat Daddy). Still traveling strongly around the bend, Ivar followed the move of favored 'TDN Rising Star' Analyze It (Point of Entry), was pulled off that one's heels and into the clear and covered his final two furlongs in a slick :22.39 en route to a one-length success. Raging Bull (Fr) (Dark Angel {Ire}) caboosed the field for the opening six panels and was home even more quickly than the winner (:22.13) while traveling 34 feet less, according to Trakus. Without Parole (GB) (Frankel {GB}) was a perfect-trip third. The final time of 1:33.99 was the fastest Shadwell Mile against the clock since the race sponsor's Altibr (Ire) (Charnwood Forest {Ire}) covered the distance in 1:33.72 in 2000.

“We were very worried about the [outside 11] post position, but his style if you see his races in Argentina, he always comes from off the pace–way off the pace,” said winning trainer Paolo Lobo. “Today, it worked very well. I was very concerned because of the first turn. Joe [Talamo] rode him 100% magnificent.”

Winner at home of the G1 Gran Criterium and G1 Estrellas Juvenile, each by a half-dozen lengths, Ivar was a never-nearer fifth in his U.S. debut in Churchill allowance company May 21 before adding blinkers and Talamo for a coast-to-coast, two-length allowance tally June 18. He attended fractions of :44.77 and 1:07.86 when last seen in the Sept. 7 Tourist Mile at Kentucky Downs and was not disgraced in being defeated less than two lengths into third.

The sire of 31 winners from three crops in his time in Japan, Agnes Gold has since been responsible for 23 group winners in South America and seven top-level winners in addition to Ivar. The 4-year-old's American-bred dam was a Group 2 winner in Brazil and was represented there by three winners from as many to race before being sold for $67,000 in foal to Hard Spun at Keeneland November in 2017. That produce, a colt named Hard Strike that cost $75,000 as a FTKJUL yearling last year, is campaigned by Walking L Thoroughbreds and Ken McPeek and was a maiden winner at first asking going a mile over the Ellis Park turf course July 4. May Be Now, closely related to GISW Al's Gal (English Channel) and his SW/GSP full-sister Ann of the Dance, is also the dam of a yearling filly by Cupid and a filly foal by Hard Spun and was among the first book of mares bred to dual-surface GISW Yoshida (Jpn) (Heart's Cry {Jpn}), like Agnes Gold a paternal grandson of the legendary Sunday Silence. The cross of Sunday Silence over Smart Strike mares is also responsible for GSWs Bright Thought (Hat Trick {Jpn}) and Epos (Jpn) (Just a Way {Jpn}).