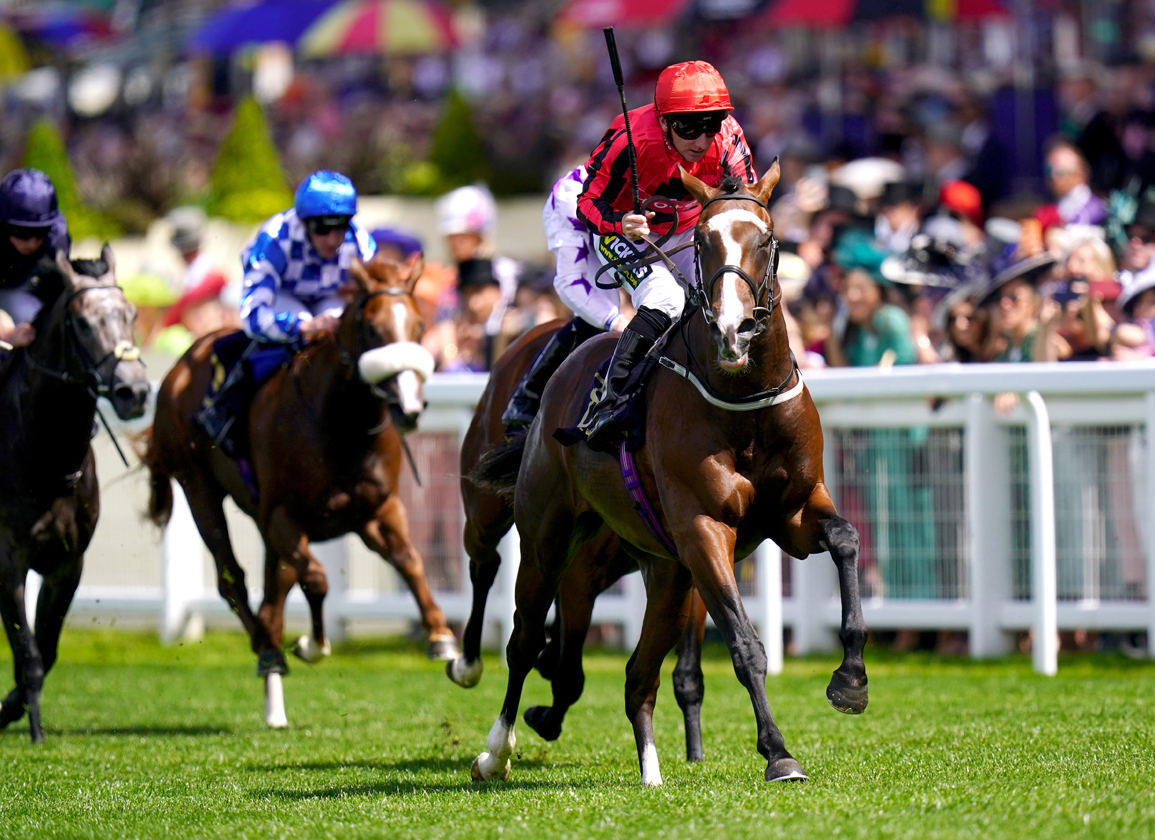 Dreams came true in Royal Ascot's opener on Thursday for Steve Bradley as his homebred The Ridler (GB) (Brazen Beau {Aus}–Colorada {GB}, by Lope de Vega {Ire}) came out on top in the G2 Norfolk S. to gain a 'Win and You're In' berth at the Breeders' Cup. Let go at 50-1, the bay who had hidden his light under a bushel up to this point did not earn it without controversy, however, in a race that is certain to attract heated debate for some time to come. A promising if unexciting third in Beverley's Two Year Old Trophy Conditions S. over this five-furlong trip last time May 28, The Ridler's win gained extra significance as he was partnered by Paul Hanagan whose longstanding relationship with the Richard Fahey stable was announced to have come to an official end last month. Proving there is no fall-out, it was a case of friends reunited as they enjoyed the fruits of the biggest shock in the history of this prestige event, which they had also landed 12 months ago with Perfect Power (Ire) (Ardad {Ire}).

Anchored early behind the leaders up the centre, The Ridler produced a strong run to overhaul TDN Rising Star and 7-4 favourite Walbank (Ire) (Kodiac {GB}) with half a furlong remaining en route to a 1 3/4-length score. That was only half the story, however, as the winner had seconds earlier drifted markedly left and significantly hampered Crispy Cat (GB) (Ardad {Ire}), who ended up a neck behind in third having had his momentum checked at a crucial stage. The fourth, Brave Nation (Ire) (Sioux Nation), also met with major interference as a result of the winner's drift but the stewards opted relatively quickly to leave the order as it finished.

Hanagan, who was handed a 10-day ban, was convinced he had won fair and square before he had the opportunity to watch a replay. “The Ridler pricked his ears in front and I always felt he was clear,” he explained. “I don't think they had to stop riding. He is still very green and a baby. I put my stick down to get him straight, so I could not have done much more.”

Fahey said, “That was a bit of a surprise–I know we were mad about the second horse [Walbank] in the breeze-up, but he made a little bit too much than we wanted to pay. I didn't think The Ridler was a 50-1 shot. He's a good hardy horse. We had him in the Coventry and had a long chat about it all, then decided to go here. You need a good six-furlong horse to win, especially the pace they went, so we're delighted.”

Of the change in the jockey situation at Musley Bank, the trainer added, “Paul is happy, I'm happy. We haven't really had a change around of jockeys, it was just bringing a young guy [Oisin Orr] in and Paul would still ride for us and has ridden for us today. You've got to look to the future, though. We will get Ascot out of the way before we think about the future, but we'd think about a flat six furlongs. He's quite a quick horse–you'd like to think of something like the Prix Morny, because if you've got a group 2, you've got to think of a Group 1.”

Steve Bradley said of his pride and joy, “The Ridler has got a reverse question mark on his face and The Riddler on every outfit has loads of question marks, including in reverse. As soon as he was born, it was a no-brainer. Weatherbys didn't like it with two 'd's, so we settled for one and the rest is history. My son Leigh is a Batman fan more than me, but it's been around for a long time, more than 60 years. Weatherbys were worried about the copyright–they didn't want to take on whoever owns Marvel Comics these days and they got a sweat on about that. I think Marvel Comics have got more money than I have! We use the National Stud to breed most of our horses and I have been involved heavily in the last 10 years in racing. It's amazing. This is the best day of my life, along with getting married and having children.”

Walbank's trainer David Loughnane was finishing runner-up for the second year in succession having missed out with Go Bears Go (Ire) (Kodi Bear {Ire}) and said, “Deja vu! The horse has done very well. He has run his race and I don't think he could have done anything different. I'd be lying if I said I wasn't heartbroken, but that's racing. We were out in front and he has probably got a little bit lonely. The winner has come down the outside and a long way across the track.”

Michael O'Callaghan was convinced the winner's move cost Crispy Cat the race. “He should have won. It is plain and simple,” he stated. “Silvestre [de Sousa] said he would have won. He never had a clear run through the race, even from the mid part of the race, and then he got wiped out by the winner when he was coming through. It wasn't the first time he had to check and he has run on again, so he should have won, unfortunately.” Brave Nation's rider James Doyle said, “He ran with a lot of credit–he would have been third without the interference.”

The Ridler, who had given little indication that he was about to deliver a performance such as this when getting off the mark at Ripon May 6 prior to finishing behind Wednesday's Listed Windsor Castle S. fourth Chateau (Ire) (Havana Gold {Ire}) at Beverley, hails from the family of the G3 Prix Corrida winner Trumbaka (Ire) (In the Wings {GB}) and last year's G1 Haydock Sprint Cup hero Emaraaty Ana (GB) by Lope de Vega's sire Shamardal. Colorada's yearling colt is by Time Test (GB).

A 50/1 winner in the opener of the third day at Royal Ascot. The Ridler wins the G2 Norfolk Stakes but a stewards enquiry has been called. pic.twitter.com/sB7SuzlhXi