Brahms Is Soothing Music To A University’s Breeding Program 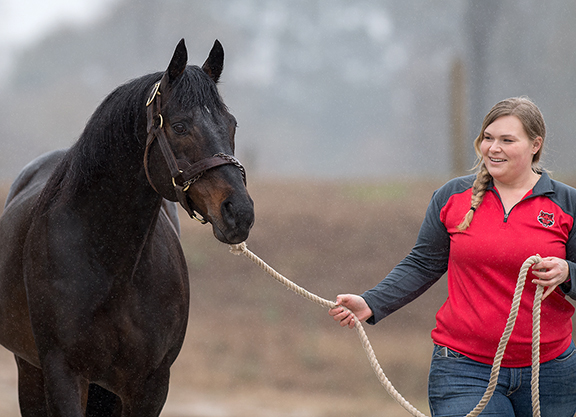 College students in equine management programs are facing an educational tradeoff this spring: Thanks to the COVID-19 pandemic, they’re getting an immersion in crisis control that wasn’t originally on the syllabus. But the horse-related teaching is not as hands-on as instructors and pupils would like, because many learning institutions have mandated a switch to online-only classes in an attempt to keep the virus from spreading on campuses.

This presents a unique challenge at Arkansas State University, because the school is one of the few in the nation that offers degree coursework involving Thoroughbred matings and foalings. This is the third year the breeding program has been in full swing, and this autumn is supposed to be the first in which yearlings that the students helped to raise will be headed for public sales.

“This will be our first crop that we try to auction,” Malissa Meyer, the animal science instructor who runs the program, told TDN. “We are going about business as usual, obviously with new safety precautions. With the current crisis, we’re not sure how that’s gong to affect us. Like everyone else in the breeding industry, we’re kind of up in the air right now.”

That means A-State’s 20 or so full-time equine management students don’t get to rush over to the foaling barn like they usually do whenever word spreads that a mare is about to give birth. They’re also no longer donning safety vests and helmets to participate in live covers involving the three stallions that stand at the school.

“It’s actually very difficult,” Meyer said of the transition to online education for subject matter that is best taught up close to groups in a stable or paddock. “Luckily, we got in a whole lot of hands-on experience before our classes went strictly online. But yes, moving classes online has presented new challenges for everyone.”

This past Saturday, a severe tornado ripped through Jonesboro, where A-State is located. The original projected path of the destruction looked like it might hit the school’s equine center, but it veered and spared that part of campus. Other parts of the city suffered significant structural damage, and at least 22 people were injured. The governor has declared Jonesboro a disaster area as the cleanup gets underway.

Tornado and coronavirus concerns notwithstanding, Meyer remains bullish about the prospects for her equine breeding program and her students.

A-State’s niche bloodstock program took a huge leap forward last year, Meyer explained, when former GISW and Kentucky-to-Australia shuttle stallion Brahms (Danzig) was given to the school as a gift.

“He came in at the middle of breeding season last year, and it was definitely an eye-opener for the students to see such a world-class act,” Meyer said of Brahms, who turns 23 on Mar. 31. “He definitely has that ‘Do you know who I am?’ twinkle in his eye.”

Brahms raced as a MGSP juvenile in England and Ireland for Michael Tabor and Susan Magnier, once running second to eventual European Horse of the Year Giant’s Causeway. Sent stateside in a private purchase, he won four straight races late in his 3-year-old season, including the GI Hollywood Derby.

His first crop of 140 foals hit the ground in 2003, and he was ranked as high as 10th and no lower than 17th in North American progeny earnings among same-crop peers over his first three seasons. In 2008, Brahms was sent to Louisiana on a lease agreement. He was the leading general sire in that state in 2009, and again in Arkansas in 2012 after moving there. His offspring have a reputation of being more sound and durable than precocious.

“We had a gentleman from Kansas, Jerold Johnson, who donated our first four broodmares to really get this program going,” Meyer said. “And he was in contact with the Hessee family from Arkansas who owned Brahms but had stopped breeding outside mares to him. But they wanted him to still have a career, so they ended up donating him to the university.”

Rascal Cat (Pulpit), an 11-for-68 campaigner, and Macho Rocket (Macho Uno), who won his 2011 debut at Hollywood Park for trainer Bob Baffert but was retired soon after, also stand at A-State, but they do not belong to the university.

“We have three stallions, and they rank anywhere from about a two to an eight on the temperament scale,” Meyer said. “Brahms is great to teach with. Macho and Rascal are definitely lower on the temperament scale, which is great in a different way for teaching students. We like to start them off with something that’s safer, then move up to the more difficult-to-handle stallions. Brahms definitely knows who he is, and he gives the students an opportunity to learn the real behavior of an experienced stallion.”

Meyer said last year the A-State stallions covered about 40 mares. Stud fees are $1,000 for each of them.

“Our clientele ranges all the way from Nebraska to Tennessee,” Meyer said. “We do get local mares as well, and we had some people send mares up from Louisiana when they found out we had Brahms. Most of these clients are breed-to-race versus breed-to-sell, which I think is fantastic.”

Of the school’s four mares that will deliver foals at the campus equine center, Meyer said, “Obviously, we need to have an outlet for these horses. But another goal is to use them in our yearling and weanling management courses to teach the students how to sales prep. We are trying to have a market to sell them in at the yearling sales. There is no in-state sale in Arkansas yet, unfortunately. And I say ‘unfortunately’ because that is something we are all working towards.”

Meyer is also proud of the fact that A-State’s equitation program–separate from the breeding curriculum–counts a number of retired Thoroughbreds in its ranks.

“I firmly believe that if we’re contributing to the breeding of these animals, then we also have to have an outlet for when their careers are done if they don’t go back into the breeding shed,” Meyer said.

A-State’s breeding program was founded by Dr. Bill McGuire, Ph.D. McGuire was also instrumental in encouraging Meyer to pursue her Master of Science in Agriculture degree at the school. When McGuire left A-State to take the assistant farm managing job at Sequel New York last year, Meyer applied and was hired to replace him. Cassie Burdett, an A-State alum who interned at WinStar Farm, came back to help grow the program and to teach alongside Meyer.

Meyer said three of the program’s graduates were able to attain bloodstock-related internships. All three were subsequently offered jobs in the Thoroughbred industry.

“By implementing the breeding program here, we’re giving them a job outlet,” Meyer said. “As educators, that’s what we want. We want them to be able to graduate and to receive a job in their chosen field.

“We really offer a full spectrum of classes, all the way from breeding the animals to maintaining the gestation, to foaling out, re-breeding, and sales prep,” Meyer continued. “We teach how to manage these horses and then actually sell them, because that is the greatest key to sustainability and staying in business.

“In our management classes, we work hard on return on investments. We make students do a full-encompassing business plan, because we want them to know that if they walk in with that plan to get a small business loan, they are going to need to understand risk analysis.”

Meyer said she is also working on implementing a certificate program.

“In the Thoroughbred industry, education plays a factor. But actual experience plays a huge factor,” Meyer said. “We want to allow students to go in with both the hands-on experience and the knowledge, but maybe without a four-year degree if that’s what they choose.”