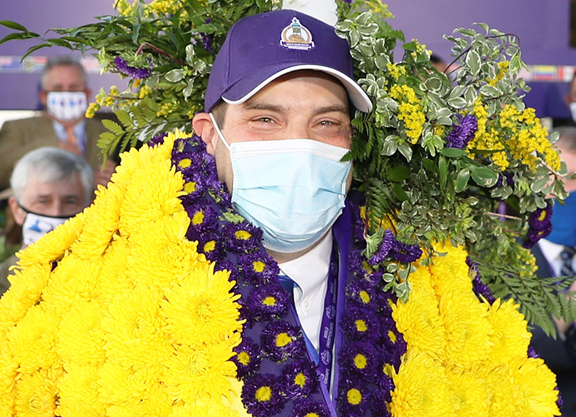 Already considered one of the hottest barns in America heading into Breeders' Cup weekend, Brad Cox's stable provided an exclamation point to a monster 2020 season with a whopping four World Championship victories at Keeneland. Now leading all conditioners with 28 graded stakes wins this year and a legitimate threat to unseat four-time defending champion trainer Chad Brown at the Eclipse Awards, Cox joined the TDN Writers' Room presented by Keeneland Wednesday. Calling in via Zoom as the Green Group Guest of the Week, Cox explained his barn's breakout success the past few years, talked about what's next for his Breeders' Cup winners and hinted at some potential new tests for soon-to-be dual champion Monomoy Girl (Tapizar)'s expected return as a 6-year-old.

“It's the quality of horse. We always left like we've been able to win races,” Cox said of his outfit's rapid rise to the top. “The bulk of the stable was made up of claiming horses for several years. We had a run with Midwest Thoroughbreds that was, for me and my crew, very educational. We had the opportunity to see a lot of different types of horses. But over the last five years, the biggest change is the clientele and the horses for sure.”

Already with an enormously satsifying weekend under its belt, Cox's operation got even more good news Sunday night, when Spendthrift Farm announced that Monomoy Girl would return to the races in 2021 after buying the mare for $9.5 million at Fasig-Tipton November.

“They asked me if I'd be interested in taking her back to campaign her in 2021, which was a no-brainer, but that was basically the extent of our conversation,” Cox said when asked about a potential schedule for the wildly popular chestnut. “She's back here with us at Churchill, she came out of the race in fantastic shape. I think we'll find out more, they're still buying horses and they seem to be busy, but I think that facing the boys or racing internationally could be something that's on their mind. And it's something that we would be up for, to say the least.”

After Monomoy Girl, the headliner of the weekend for Cox was Essential Quality (Tapit), who dominated the GI TVG Breeders' Cup Juvenile to run his record to three-for-three and likely salt away a divisional championship. The gray is the latest best hope for Godolphin to win its elusive first GI Kentucky Derby, and Cox talked about his impressions and immediate plans for the colt.

“He came out of the race really, really well,” he said. “We took him back to the track this morning, just jogged him. He's full of himself at times. He's a Tapit, so he has a lot of energy. But he seems to know when to turn it on or shut it off, which I think is a great trait of quality in a classy horse. I think the sky's the limit and I don't think there's any kind of distance limitations with him. There really doesn't seem to be a bottom with him so I'm very optimistic he could be a horse that gets a mile and a quarter. We'll start training him again at some point in early December at Fair Grounds. It'd be nice to get a couple of races into him in February, March, April and hopefully he does enough to earn himself a spot in the Derby.”

Cox also indicated that he would consider a maiden European journey for his barn with GI Breeders' Cup Juvenile Turf heroine Aunt Pearl (Ire) (Lope de Vega {Ire}), saying, “It would be nice to get a start into her this spring and then maybe look at Royal Ascot with her. Maybe a similar campaign that Sharing (Speightstown, second in Ascot's G1 Coronation S.) had. I thought about that after she won the Jessamine because of one, her pedigree, and two, [winning with] no Lasix. I think that's a benefit that's going to help our horses internationally.”

Elsewhere on the show, the writers broke down all the action from Breeders' Cup weekend and, in the West Point Thoroughbreds news segment, laid out their biggest takeaways from Fasig-Tipton's 'Night of the Stars' and the early days of Keeneland November. Click here to watch the podcast; click here for the audio-only version.