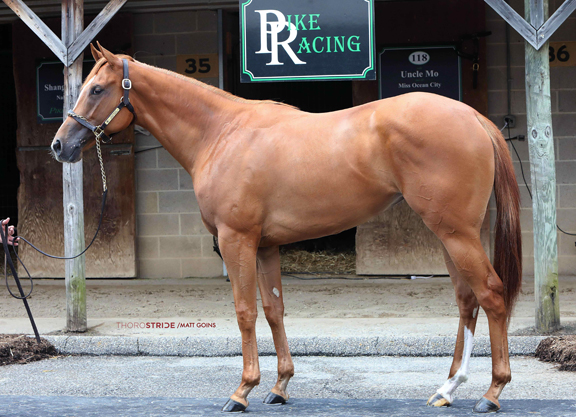 TIMONIUM, MD – A filly by Bourbon Courage worked the fastest quarter-mile and three juveniles shared the day’s fastest furlong work time during Thursday’s second session of the under-tack show ahead of next week’s Fasig-Tipton Midlantic 2-Year-Olds in Training Sale in Timonium, Maryland.

Bourbon on Sunday (hip 286), a Maryland-bred daughter of Bourbon Courage consigned by Naoise Agnew’s Nomad Farm Training and Sales, worked a quarter-mile in Thursday’s bullet time of :21 1/5. It was the second fastest quarter-mile through two of three sessions of the under-tack show.

“We actually thought she might go a little faster than that,” Agnew admitted. “She prepped out here really fast, :21 4/5 and they were just sitting on her basically. But we are very happy with her. She did it very easily by herself. And she blew a back shoe as well in the work, that could have been our :21 flat right there.”

Agnew is consigning the filly on behalf of breeder Ron Parker, who has a five-horse commercial broodmare band based in Maryland. Parker purchased the filly’s dam Sunday in Malibu (Malibu Moon) for $5,000 at the 2017 Fasig-Tipton Midlantic January sale. The stakes-placed mare is also the dam of stakes placed Faze the Nation (Cal Nation).

Agnew has a farm near Penn National and Bourbon on Sunday has been working at the Pennsylvania track.

“She’s ready to go right on,” Agnew said. “She is a really, really nice horse. I’d put any money on it that she’s going to be a stakes horse.”

“I come here with a handful of horses every year,” he said. “I have two client horses this year and the other ones are mine.”

Keiber Rengifo’s Golden Rock consignment sent out a daughter of Fed Biz (hip 276) to earn a share of Thursday’s furlong bullet time of :10 flat. The Maryland-bred filly is the first foal out of stakes-placed Stormin Wendy (Ecclesiastic). She was purchased by Scott and Evan Dilworth for $25,000 as a weanling at the 2018 Keeneland November sale before RNA’ing for $21,000 at Keeneland last September.

“Our client bought her at the Keeneland sale in November as a weanling,” Rengifo said. “She was going to go to the yearling sale, but there were so many horses there she got a little lost. He just decided to keep her. He saw a lot of talent in her when they were prepping for the yearling sale and they decided to send her to a 2-year-old in training sales.”

This is Golden Rock’s second consignment to the Midlantic sale, but Rengifo has plenty of positive memories of the Timonium auction.

“I was working before with Randy Hartley and Dean DeRenzo and they had a lot success at this sale and that’s why I really like this sale,” the Venezuelan said. “When I worked for those guys, they did really good here. So to have a filly like her is something special. Not too many horses can do a :10 flat here.”

“Constitution is really hot right now and this horse loved the dirt and we really like the Munnings filly,” Rengifo said. “The Goldencents colt is Pennsylvania-bred, so we decided to bring him up here since it’s so close to Parx and Penn National.”

Rengifo, who rode some 18 winners on the Midlantic circuit in 2015, 2016 and 2017, breezed all of the Golden Rock horses in Timonium and said he thought the track played fair throughout the day.

“It’s not too hard or too deep. They do a good job with the track-they put a lot of water on it,” he said. “Last year, they were breezing 35 of 40 horses a set and they would have four or five sets. Now with the seven sets, I don’t mind because I think it’s the same opportunity for all of the consignors. Every set gives a really good chance to everyone.”

For the second day in a row, Luis Garcia’s L.G. consignment sent out a first-crop juvenile by Speightster (hip 261) to work the furlong bullet time of :10 flat. Garcia purchased the filly, in partnership with Gina Fennell, for $20,000 at the Keeneland September sale. The bay is the first foal out of graded stakes placed Spirituality (Gemologist).

Consignor Al Pike was also represented by his second furlong bullet worker of the under-tack show. Pike sent out a filly by Goldencents (hip 263) to work in :10 flat Thursday. She is out of Spring Zapper (Ghostzapper), a daughter of graded stakes placed Spring Season (Seeking the Gold). Pike purchased the juvenile for $30,000 at last year’s Fasig-Tipton July sale.

The under-tack show concludes with a final session Friday beginning at 8 a.m. The Midlantic sale will be held next Monday and Tuesday with bidding scheduled to commence at 11 a.m.