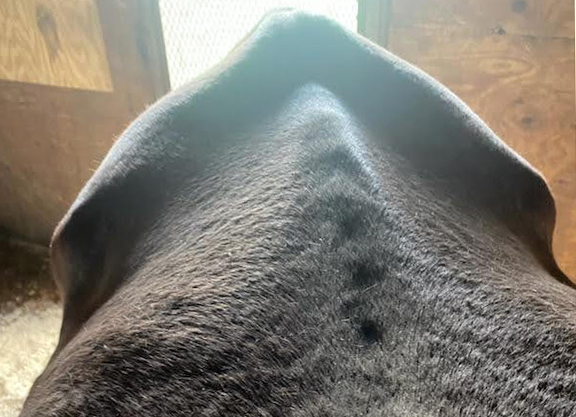 One of the malnourished horses at the Paris, Ky. farm | courtesy Christina Stewart

The Bourbon County Sheriff's Office has launched an investigation that involves dead and malnourished horses found March 19 at a Thoroughbred farm in Paris, Kentucky. According to the police report, that property was owned by Steve Johnson, who had leased it to Xavier McGrapth. According to his Facebook page, McGrapth is the owner of McGrapth Breaking and Training. The TDN was unsuccessful in its efforts to reach him.

In a statement released Tuesday, the Sheriff's office said that the investigation was ongoing and that a suspect had been identified and a criminal complaint had been issued. McGrapth was not named in the statement.

“There's no doubt in my mind that he was starving them,” Evans said of McGrapth. “Never when I went out there did I see him feeding anybody.”

According to the police report, “(Evans) advised that she went into the barn to locate her horse and located another horse in the stall that hers was supposed to be (in). The horse in that stall was very malnourished and also had sores on its head and body. Deputies also were shown the two dead horses, one of which appeared to (be) recent and one that appeared to have been dead longer.”

The report says that police called in a veterinarian, Dr. Zach Logan, to assess the horses. “He looked at the 23 horses that were at the location, he advised that 11 were malnourished or severely malnourished, and the two that had died were likely to have been starved to death.”

Diana Winkelspecht, who had received a call from one of McGrapth's owners asking her to retrieve his horse, was among the first to arrive. She said she would eventually take in a number of ailing horses that had been on the property.

“We couldn't walk away from the situation,” she said. “After seeing this I had to see that something was done and that someone was held accountable for it. It looked like these horses had been abandoned. It didn't look like anybody had been on the part of the farm Xavier was leasing for a while. Weeks if not longer. There were two dead horses in the paddock and there were horses that were skin and bones. That's weeks and weeks of abuse.”

The police report said that Johnson had offered to personally see that the horses would be taken care of, and he told TDN that he was unaware that there were any problems with the McGrapth horses.

“This was his operation,” he said. “I didn't feel it was necessary for me to go back and look over his shoulder at what he was doing. I would drive by the front of the part that he was leasing and I saw the horses in the paddock, I saw him out exercising, galloping the horses or whatever. I could see the shape of those horses and they were acceptable. There weren't any warning signs that I saw.”

Johnson said he looked into McGrapth's background before leasing him the stalls and received “glowing reports” on him. McGrapth had worked at Pin Oak Stud as a groom.

“I checked him out and his references were very strong,” Johnson said.

Bourbon County police said they plan to file a summons.