Book Review: The Rough Magic Of The Mongol Derby 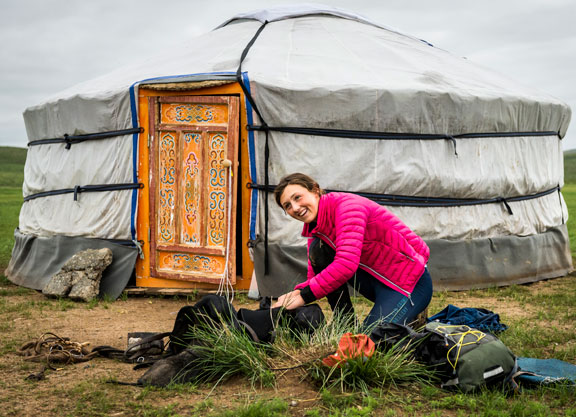 “Why do humans put so much thought into some decisions, yet plunge into others like cavalier penguins?”

This was 19-year-old Lara Prior-Palmer's revelation after a day spent poking around Google for inspiration in June of 2013 led her to the application page for the Mongol Derby. It was seven weeks out from the world's longest and toughest horse race, most of the other 40-odd riders had been training for a year, and she didn't have nearly enough money to cover the entry fee. Yet, there is something intensely captivating about that far off, wild landscape and its horses and people, and so, wildly unprepared, Lara hit the big red 'apply' button.

I can attest to that feeling of wonderment and that urge to recklessly dive in head-first despite the odds of success-or even survival–looking incredibly unlikely; four years after Lara, it was me clicking that apply button, despite having never in my life camped or used GPS navigation, and having not been on the back of a horse in three years. Hell, I didn't even know if I still enjoyed or was capable of riding, but something about the very thought of the Mongol Derby is absolutely intoxicating.

Rough Magic, set to be released in May, is Lara Prior-Palmer's debut book and her memoir of becoming the youngest-ever person and first woman to win the Mongol Derby. The Mongol Derby is a 1,000 kilometre (or 620 mile) horse race across the steppes of outer Mongolia modeled after Chinggis Khan's pony express postal system of the 1200s. It is recognized by the Guinness Book of World Records as the world's longest multi-horse race. Riders change horses every 40 kilometres, and as the Mongol horses are designed with stamina as their forte, it is an endurance race for the rider much more so than the horse. There is no marked course; riders navigate between the roughly 25 checkpoints by GPS. Riders are permitted to carry only five kilograms (11 pounds) of kit for the six to 10-day ride and, after 14-hour days in the saddle, they camp out at night with Mongolian nomads. On top of all that, the steeds are rarely compliant: bucking, rearing, bolting, and sometimes the exact opposite-refusal to move at all-are commonplace. The Mongol Derby was brought to life by British-based company The Adventurists in 2009, and Lara was riding in the fifth renewal.

Less than two months after lodging her application, Lara touched down in Mongolia (the world's second-largest landlocked country, smack between Russia and China) with what she had scraped together for a pack, which included a copy of Shakespeare's The Tempest “to lift her out of any lows” during the race, and her re-cap of the experience is written in a decidedly poetic style.

The improbability of Lara winning the race-or, perhaps, even completing it at all-seems to grow only larger during official race training, when she becomes entangled in her own equipment and gets lost on her navigation test ride. The situation looks still hopeless the following day when, once the race is finally underway, Lara is the very last rider to reach the first checkpoint. But, as anyone who has taken on the Mongol Derby knows, absolutely anything can happen, and soon, Lara is making up ground.

It helps, too, that she has a target: Texan Devan Horn, a boastful, self-confident 20-year-old who makes enemies of some of her fellow riders right from the beginning after assuring victory at the start line. Sure enough, at the end of day one, Devan is a full leg-40 kilometres, or roughly four hours-ahead of everyone else. One thousand kilometres is a long way, however, and when any one of a million misfortunes can occur, defeat can easily be snatched from the jaws of victory.

Lara continues to move up through the pack and chip away at Devan's lead over the next four days, and in recounting her journey in Rough Magic she strikes a beautiful balance between embodying the thrill and competition of the race-with her rivalry with Devan as the focal point–and also indulging in the race's deeper spiritual side.

“We humans seem to have put a lot of energy into separating ourselves from nature,” Lara muses. “The race reclaims me as an animal-my original form, my rawest self, my favourite way to be.”

She remarks on the immense physical and mental challenges she faces, and reflects on the nomad way of life she has become temporarily immersed in and the lessons a Westerner can take from it.

“The refusal to rely on the same patch of land to perform year in, year out, resonates with the idea that you can't depend on one place-or one person-to keep producing the same effect,” she says. “But why let their consistency disappoint, when you can simply move on?”

The drama of Rough Magic builds into a crescendo with an outcome to the race that is scarcely believable and unprecedented still in the short history of the event. Lara Prior-Palmer's memoir is an essential read for anyone with an unbridled sense of adventure, or simply the desire to believe the impossible truly isn't. Having been in Lara's shoes I can attest it is a fitting tribute to the Mongol Derby, the world's longest, toughest, roughest, most magical horse race.

Rough Magic goes on sale on May 7 from Catapult Books and is available for pre-order now.