Bone Injury: The Science of Rest and Repair 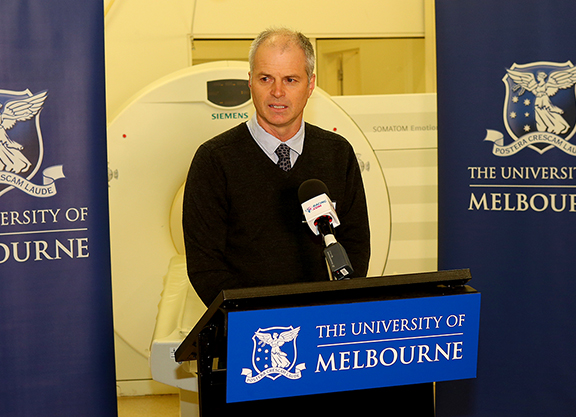 The recent traumas at Santa Anita have energized all kinds of different welfare agendas, so that as much attention is perhaps now being paid to the whip or medication as to the racing surface. But one question has received surprisingly little air time, given how integral it is to the whole horrible business, and that is whether horsemen could improve their practical understanding of the mechanics of catastrophic limb injuries, and improve routine practices accordingly?

To be fair, it did not take long to put bisphosphonates in the dock, with regard to their misuse in sales preparation to cloak issues in the bone development of weanlings or yearlings. But how about the stresses placed on bone in more mature horses, once in training?

For a premier authority in this field, TDN turned to Professor Chris Whitton, Head of the Equine Centre and Professor of Equine Medicine and Surgery at the University of Melbourne. His insights are such that it would be remiss for anyone working with Thoroughbreds in training, or employing others to do so, not to measure the demands being made of their horses against the science he renders highly accessible to the layman.

Because as Whitton said himself: “The cluster of breakdown injuries at Santa Anita is a tragic reminder of the potential dangers of racing, but these events should not be considered accidental or acceptable.”

With the caveat that more work is required to pinpoint what trainers can do to reduce breakdowns, he assures stakeholders that recent research has progressed the understanding of when, how and what kind of injuries occur. And the critical starting point is that most bone and joint injuries in racehorses are the result of fatigue damage.

“Which means they occur due to the weakening of bone over the course of training and racing, rather than because of a single incidental injury such as a fall or trip,” Whitton explained. “Racehorses apply extremely high loads to their skeletons when galloping, with the highest occurring in the joints that are most commonly injured: the fetlock, and the knee or carpal joint.

“The most important thing to understand about bone fatigue is that it builds up over time. Tiny cracks will accumulate in the bone during training. This means that it is not what the horse was doing on the day an injury occurred that is most important, but rather what the horse was doing in the days, weeks or months leading up to the injury. With every fast gallop or race, a proportion of the lifespan of the bone is used up. Training and racing intensely in the short term might seem to be a successful strategy, if there is no immediate consequence. But by depleting the bone’s reserves it may have set the horse up for future injury.”

Many people may not be aware that bone isn’t hard, “dead” material, but living tissue, capable of “resorbing” damage and adapting to the rigours of racing-so long, that is, as it is given the opportunity.

“Bone is a dynamic tissue, able to both adapt to the loads applied to it and repair bone that has been damaged due to exposure to many loads,” said Whitton. “The need for adaptation is why trainers introduce training gradually, to allow the skeleton to strengthen as the training intensity increases. Less well understood is the bone repair process.”

He explained that specialized bone cells can remove older, fatigued bone; and are followed by cells that produce new bone. Under the pressures of training, however, this repair process slows down. And that lead Whitton to offer perhaps his single most important counsel for horsemen to grasp, “The most efficient way to get good bone turnover is to spell the horse from training, or at least reduce the training intensity for a period.”

On the face of it, this may not appear welcome news to those who feel that modern Thoroughbreds are already raced far less often than their predecessors. As Whitton noted, however, periods of patience may very well yield more resilient and repeatable performance during periods of activity.

“”Resting horses to allow bone repair removes the need for enforced rest when horses suffer an injury,” he remarked. “Those enforced rest periods are nearly always longer than those required to allow enough bone turnover to prevent injury. Even if it doesn’t result in more starts for a horse, it will result in more consistent performance and fewer poor runs.”

In that connection, one of the most common questions Whitton is asked is whether there is evidence to support the anecdotal presumption that 21st Century Thoroughbreds have less robust constitutions than their forbears. If anything, however, he noted that injury rates in Australia have not changed a great deal over the last 20 years-and, indeed, that the figures in the U.S. had until this year been improving.

As for the nuts and bolts of how these disasters occur, Whitton broadly divides them into two types.

“Firstly, bone that is poorly adapted to high-speed work can fail very quickly,” he said. “Typically, this type of fracture occurs six to eight weeks into a training period in a horse’s first preparation, where the skeleton has not previously been exposed to repeated galloping exercise. And, because bone de-adapts when training ceases, horses returning from a period of rest greater than about 10 days to two weeks are also at higher risk of injury.

“The second type of injury occurs in horses that do a lot of high-speed work over the course of their career, or in horses that complete a very large amount of work in a short period of time-in which case, the rate of accumulation of bone damage is greater than the system’s ability to remove it.”

Taking these risks on board would not just reduce the kind of heartbreaking accidents that have lately been making the headlines, but also improve the soundness of the Thoroughbred across the board. As Whitton noted, complete bone fractures are relatively infrequent.

“But less severe injuries to the joint surface due to bone fatigue are common in racehorses,” he said. “Such injuries can result in poor performance and lameness but are hard to identify, unless sophisticated imaging equipment like scintigraphy is used.”

It is difficult, however, for academics to analyze the mere surface data of racehorse rest and injury. As things stand, many horses are obviously rested precisely because they have a problem, which puts them at risk of developing more serious issues in future. By the same token, Whitton would not presume to comment on the potential causes of the recent crisis at Santa Anita.

“Stricter medication rules would improve the overall situation, but are not specific to California,” he remarked. “Having readily accessible information about each horse, including their veterinary, training, and racing history will help us make better decisions about their management.”

Nor does he reproach racing professionals for ignorance about the structural risks to which they might be exposing their horses, as much of the science has only emerged over the last decade. “Having said that, good horse people know these things instinctively, even if they don’t understand the underlying physiology,” he stressed. “They know that it takes time to prepare a horse for a racing career, and that horses need regular breaks from training to refresh. When an injury does occur, however, human nature means we tend to blame what happened at the time of the injury-whereas it’s actually because of what happened in the days, weeks and months that lead up to the injury. That’s quite counter-intuitive.”

And, as such, it’s a vital lesson for everyone to absorb. In short: if you want to reduce the chances of a breakdown, give your horse a break.