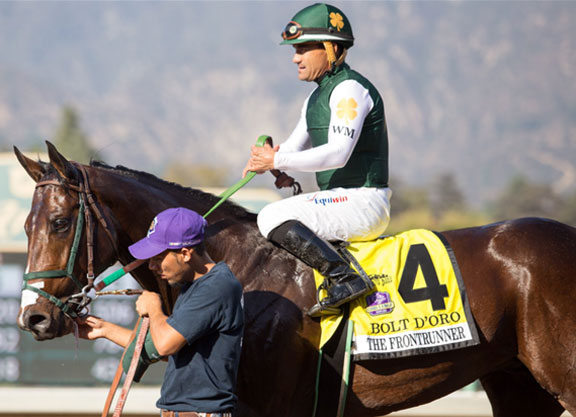 Ruis Racing's Bolt d'Oro (Medaglia d'Oro), a two-time Grade I-winning finalist for the Eclipse Award for champion juvenile male of 2017, will be pointed toward the Mar. 10 GII San Felipe S. after missing an expected start in the Feb. 10 GII San Vicente S. with a pulled muscle, owner/trainer Mick Ruis said Sunday. While Ruis was at his ranch in Big Fork, Montana checking in on his yearlings, Bolt d'Oro galloped Sunday morning at Santa Anita.

“My first preference would be to run in the San Felipe and then the [GI] Santa Anita Derby [Apr. 7], because I would love to stay here and run where we've been stabled,” said Ruis when asked about future plans. “It looks like we'd do that, for sure.”

Ruis said he would likely sharpen his star colt up with a series of works in company leading up to the San Felipe.

Another newly turned sophomore colt making a name for himself at Santa Anita is Michael Pegram's McKinzie (Street Sense), a decisive 3 1/2-length winner of the GIII Sham S. in Arcadia Saturday. Trainer Bob Baffert said all was well with the colt Sunday morning.

“He looks great today,” Baffert said. “Now I can sort of ease off him a little bit, find two spots–it could be here, it could be out of town–I don't know yet.”