Body & Soul: What Goes Around Comes Around?

Don't let that headline throw you off–we are not about to bury anyone in keeping with the Oxford English Dictionary's definition of the proverb, i.e., “the consequences of one's actions will have to be dealt with eventually.”

However, there may be a little karma being tossed around herein because of what the graphic which accompanies this essay seems to indicate.

To set the stage we take another bit of a dip into the endlessly fascinating brain of Dr. Franco Varola, for whom our admiration is shameless. He devoted Chapter 11 in The Functional Development of the Thoroughbred to how the species developed over time in each country to reflect the culture and economy of that country. His is a fascinating analysis of how breeding and/or purchasing Thoroughbreds tends to reflect the psyche, if you will, of a particular country–or at least how it likes to present itself to the world.

For example, the British tend to emphasize excellence in a royal sense–the Classics are the be-all and end-all, and one should breed a horse that comports itself royally, don't you know. The French strive for all-around excellence but also want to see it done with style–or as Varola called it, “souplesse.” The Germans built their bloodstock on the dour professional, and it used to have to be “dunkelbraun”–dark bay or brown.

As for the Americans, well, no one can figure us out, not even Varola. But we'll give it a try.

To bring some perspective into our thesis please note that your correspondent spent a good portion of the 1970s and part of the 1980s as a journalist with three specialties–financial matters, travel, and Thoroughbred racing. This was a wonderful gig, especially when a travel assignment coincided with locations where racetracks were located.

One might recall that the 1970s and 1980s were eras of turbulent social change and, almost forgotten today, massive financial dislocations–recessions, inflation, ruinous scandals. These two decades also saw extraordinary changes in Thoroughbred racing's financial infrastructure beginning with the Northern Dancer mania at the sales to the development of multi-member racing partnerships to the exploratory and eventual embracing of simulcasting.

We will not need to expound upon the specifics here but instead we will share an insight which, over those years, we expounded in print: It seemed that whenever the overall international economy was disrupted for the majority, the hints were there first in Thoroughbred racing and breeding–sometimes up to two years ahead. Yearling sales went through the roof, and a year or so later inflation grabbed the news headlines–followed by market crashes. Breeders suffered through market crashes and foreign interests scooped in to nearly decimate historic broodmare bands.

In short, things went from a period of financial stability which dominated the 1950s and most of the 1960s to a push-and-pull amongst the entrenched Wall Street ways of doing things to financial innovators who invented, peddled, and profited from questionable futures as well as sometimes wild, and usually unsuccessful, tax shelter schemes.

In hindsight, we can now look back on the cultural changes, many of which evolved into political expressions, and see that what many feared was the loss of political stability at the time of John F. Kennedy's election turned out to be just a hint of what would come. There was always a push-and-pull in American politics between conservatives and progressives but it was usually the men in the middle (without much female assistance) who held the center and prevailed. However, with the civil rights movement, the Vietnam War, women's liberation, LGBTQ awareness–all wrapped in a mix of disco, heavy metal, rap, and country music–the push-and-pulls turned into tugs of war.

What follows logically is how the stallion population, which comes from the racing population, is shaped by the culture and economics of an era. This shaping comes into focus over one or more decades, and we noticed in a biomechanical sense that something interesting might be going on. 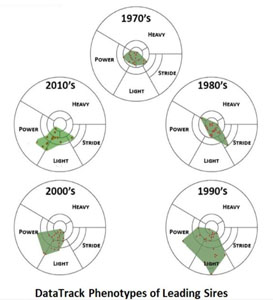 We present herein a graphic depicting the phenotypic distribution of the leading sires for the past five decades. One should recall that a phenotype is defined as any “detectable characteristic of an organism (i.e., structural, behavioral, etc.) determined by an interaction between its genotype and environment.” As such, we have arranged our phenotype targets in clockwork fashion by decade with the 1970s at the top. Note that stability and conformity are closest to the center, and the more traditional (i.e., Classic-oriented) is off to the right (Emphasis = Stride), while the new (Emphasis = Power) is off to the left.

Note that the distribution of phenotypes in the 2000s and 2010s appear to be congruent, but in reality we are seeing a subtle move back toward the center because the stallion population in the 2010s is relatively young and are of the type that are getting sons who might help influence that movement over the next decade.

It might not turn out to be “everything old is new again,” but it could very well be somewhat karmic.