Home » Archive » Shared News » Body & Soul: Home Is Where The Heart Is

Body & Soul: Home Is Where The Heart Is 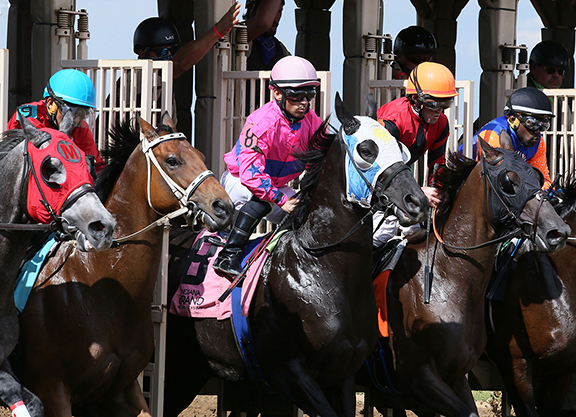 With apologies to Pliny the Elder, who more than two centuries ago penned those words in the headline, and also to Elvis, who expanded their meaning in a modest ballad of the same name in 1962, we are about to examine what has evolved after at least 40 years as a science-based axiom of racing efficiency and success: How much of a factor does the cardio system of a Thoroughbred influence its ability?

Let us state up front that the answer to that question may depend on which scientific tools or evaluation programs are used to gather the data required. That's because there are a number of providers which offer services that purport to determine whether a horse's cardio system (not just the heart, which is part of the system) is capable of generating enough fuel to provide the energy needed to achieve success at either a distance or class level. Your correspondent has been using one such system for more than 30 years.

However, we are here to report a deeply researched study of a particular group of racing prospects and how they fared on the racetrack after their hearts were scanned by ultrasound and their body sizes calculated to determine whether the cardio system “passes or fails” various criteria, described further on in this essay.

The study in question is based on data gathered by DataTrack's BreezeFigs™ system and published daily since 2005 by Daily Racing Form online (www.drf.com). Simply stated, BreezeFigs is a speed-and-stride-length based “fig” which was earned by every horse that breezed at every major 2-year-old sale held from 2012 through 2017.

Those which pass conformation inspection at the barns are selected for cardio ultrasound scans. Thus, this study concentrated on a focus group of 865 fillies and 1,253 colts whose performance at the sales prompted our analysts to obtain those scans.

The data gathered from each scan is run through an algorithm that takes into consideration the size of the heart, its pumping efficiency and the horse's body size. This gives us a Cardio Score which is based on a numerical system that is akin to a “report card” of six grades of equal decimal distance: A, B+, B, C+, C, D–the higher the numerical score the higher the “report card Cardio Grade,” ergo the more efficient the system for that horse.

What the system does not do, however, is disqualify a racing prospect based on the size of the heart alone because body size and cardio pumping efficiency play a big role in the score. A simple analogy might be to compare the size and structure of the horse to an automobile model and the efficiency of the cardio system to horsepower of the engine, to wit:

A horse which is a Maserati in structure with what appears to be an average size heart may generate a B+ Cardio Grade because that heart (engine) can rev up quickly to deliver the right amount of fuel for that chasis. However, if the heart is more like the engine of a Chevy Suburban, it will most likely take a longer time to pump up to overall efficiency and the race could be over, and thus wind up with a C+ Cardio Grade.

The dividing line was even stronger when it came to stakes winners which, after all, is what everyone wants to buy. Below are the distributions per Cardio Grade of black-type winners in North America and countries to which 2-year-old graduates were exported. As the charts indicate, more than 80% of the fillies and colts that won stakes races had Cardio Grades of B or better. 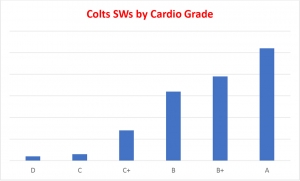 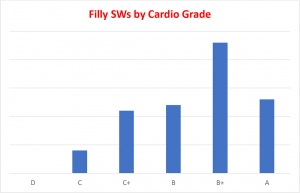 With data such as this, one can appreciate the irony of lyrics of a tune from Damn Yankees…

All you really need is heart

When the odds are sayin' you'll never win,

That's when the grin should start.”*

… which these days can apply with equal meaning to humans and those who breed, own, train, ride and bet on Thoroughbreds.

Bob Fierro is a partner with Jay Kilgore and Frank Mitchell in DataTrack International, biomechanical consultants and developers of BreezeFigs.  He can be reached at [email protected]