Body and Soul: Two Galleries in a Museum 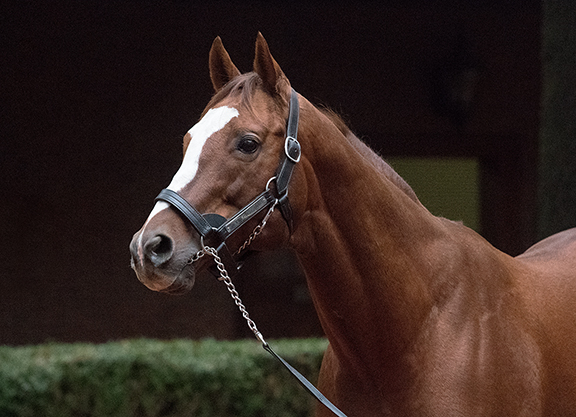 There are about a half dozen ways one can look at the steady but inexorable marches to the top of the Thoroughbred breeding world by Medaglia d'Oro and Kitten's Joy, but if you don't start with their daddy, you would have missed the point.

That would be El Prado (Ire), an accomplished but generally overlooked winner of the G1 National S. in his native country whose pedigree, racing record (he was co-champion at two in Ireland with St. Jovite), and conformation captivated Frank Stronach so much that he purchased the son of Sadler's Wells and retired him to Airdrie Stud before deciding that he would get into the stallion business himself at Adena Springs Farm.

Named for the great Spanish museum of art built within the confines of a meadow-like park (prado translates into park in English), the powerful-but-somewhat-lightly made-gray was imbued with a genetic pool which was deep in quality and some sire power. His dam Lady Capulet (by Sir Ivor) was a full sister to Sir Wimborne, who also won the National in Ireland when it was a Group 2. Sir Wimborne was retired to John Hettinger's Akindale Farm in New York where he developed into a leading sire at the beginning of that state's incentive program. Lady Capulet was also a half-sister to the gray speedball Drone, a son of Sir Ivor's sire Sir Gaylord, who went unbeaten in four starts but broke down; Drone was a popular and somewhat successful sire.

With a family like that, which in most branches had roots in Kentucky, one would think El Prado would have been a popular choice as a Northern Dancer-line sire. However, we are talking about the early 1990s here, when turf horses were not all that popular, and Sadler's Wells was just beginning what turned out to be an extraordinary career at Coolmore. Indeed, El Prado, the first son of Sadler's Wells to retire in this country, entered stud a decade before his sire's great son Galileo (Ire) was foaled.

Well, it turns out that plenty of people had a hint (including Ken and Sarah Ramsey, as well as Albert and Joyce Bell), and in the end, El Prado sired more than 80 stakes winners.

The Ramseys sent Kitten's First, a daughter of the super turf sire Lear Fan (the mare was named for Sarah Ramsey's nickname) to his court and got a powerful chestnut colt which they offered at the OBS April 2-year-old sale. That colt failed to sell at $95,000 and was sent to the stable of Dale Romans, where the colt became a very accomplished Grade I winner on the turf under the name of Kitten's Joy.

The Bells, on the other hand, sent Cappucino Bay, a daughter of the moderate sire Bailjumper, and were rewarded with a very special-looking dark bay colt whom they put into training. After finishing second in his debut at the end of his juvenile campaign, he broke his maiden so impressively that Bobby Frankel purchased him on behalf of Edmund Gann, for whom the striking colt went on to win the GI Travers S., among other graded events, under the name Medaglia d'Oro, bestowed upon him by the Bells.

Which brings up an aside. In March 2002, preparing to leave Ocala Breeders' Sales simulcasting facility after a breeze show, your correspondent ran across the late bloodstock agent and raconteur Dick Lossen, who grabbed me excitedly.

“You've got to watch this horse Frankel has in the San Felipe,” he said, “but I can't pronounce his name, maybe you can because I think it's Italian–meedaglee ah dee-oor-o.”

I looked at the past performances and winced. “Dick, it's meh-dahlia-dorro, you heathen”

“What the heck kind of a name is that?” he replied.

His college-age son rolled his eyes and said, “It's the name of an espresso coffee, Dad.”

To which I replied, “Yes, and thank you for not saying ex-presso.”

Thus far we have seen that a vastly underrated stallion managed to sire at least two exceptionally talented racehorses who have emerged as hugely successful sires. One, Kitten's Joy, is the leading North American-based sire by international earnings in 2018 and also the sire of the European Horse of the Year Roaring Lion. The other, Medaglia d'Oro, equaled the record of Mr. Prospector, Danzig, and Storm Cat by having seven Grade I winners in a single year (2017) after he'd already given us the eminent works of art Rachel Alexander and Songbird, among others. To boot, his son Violence currently tops the second-crop sire standings.

But the dams and female families of these two top sires could not be further apart in pedigree mix or stallion crosses–and to the naked eye, they are quite different.

But when we get to biomechanics, we have two horses that are quite the same in many respects. The Phenotype Target shows that El Prado and his two best sons are basically from the same mold. They are Power horses but their positions far out from the center indicate that they are also somewhat lightly made. They are almost perfect examples of how American breeding stock has evolved over the past 50 years to accommodate such biomechanics. 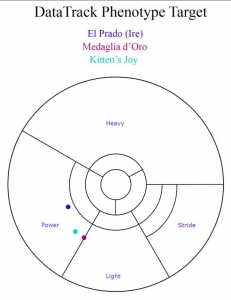 To wit: Up until the 1990s, the majority of quality racehorses and producers were phenotypically closer to the center of the Target, i.e., they were more likely to be balanced as to Power, Stride, and Weight factors and therefore were more consistent. Although they may have been very good racehorses, very rarely were horses with too much or too little body weight (sprinters and two-turn horses respectively) able to compete in the breeding shed with horses that were simply better balanced.

Then the market for racehorses changed–trainers wanted more speed (Power) and size (which often was found in lighter made horses), and the breed shifted phenotypically toward the positions on the Target occupied by El Prado and his two best sons. In that respect, Kitten's Joy and Medaglia d'Oro are almost identical paternal half-brothers.

In addition, further plumbing of the biomechanical algorithms finds that, among the leading sires, both Kitten's Joy and Medaglia d'Oro are not only very close to each other in terms of size and scope, but also several other stallions are close to them in that respect, including Flatter, Deputy Minister, A.P. Indy, and Empire Maker. Nice crowd.

Our biomechanically expert colleague Frank Mitchell opines that Kitten's Joy's best runners are probably more powerful overall than those of Medaglia d'Oro, but the latter brings a bit more versatility and perhaps refinement to the fray. Thus, one could look at them in terms of baseball, football, and basketball stars with Kitten's Joy sending out David Ortiz, Ben Roethlisberger, and Lebron James while Medaglia d'Oro would counter with Aaron Judge, Tom Brady and Larry Bird.

That's a bit to contemplate. It's time to feed the cat and make the espresso.