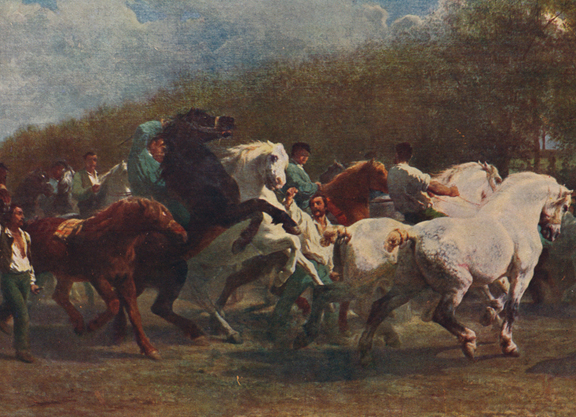 A scene from “The Horse Fair” | Getty Images

Even if you've done it before, the next time you are in Manhattan, schlepp yourself up to the Met (Metropolitan Museum of Art) and position yourself opposite the massive and visually cacophonic masterpiece, “The Horse Fair,” by Rosa Bonheur. After the usual “OMG!” reaction you will have in your throat, and heart, perhaps you will have a better perspective about your correspondent's reaction to the aesthetic stampede of the progeny of first-year stallions which were paraded at the Fasig-Tipton July, Saratoga, and Keeneland September yearling sales.

As in Bonheur's painting, there is no mistaking that these yearlings were of a breed; and as in the painting, there is no question how each of their sires stamped them with readily identifiable visual and phenotypical qualities that set one tribe against another in quest of superiority among the herd. However, while Bonheur was a prime example of the Realist movement, she worked enough elegance into her work to serve as somewhat of a bridge to Impressionism, which sets the stage for our discussion.

In short, this is quite a crowd of stallions, perhaps one of the most highly anticipated and–thus far–exceptionally impressive bunch that has come along in years. That's because aside from their race records and pedigrees, with few exceptions you did not need to look at the stall card or catalogue page to know who the sire was when the colt or filly walked out of its stall.

As previously reported, it started in July when Competitive Edge popped up with a profile that surprised some that his offspring were basically uniform and consistent. They looked like carbon copies of each other (and their sire and his sire, Super Saver), and most of them projected speed, both to the eye and to our biomechanical assessment.

It was also a sale in which the first-crop representatives of the A.P. Indy line, through the great stallion's son Commissioner, and through grandson Tapit and his sons Constitution, Race Day, and Tapiture were of an A.P. Indy mold to the eye–though they worked out quite diversified on biomechanics.

We also got a sneak peek of sorts on sons and daughters of Bayern, Carpe Diem, Palace, Palace Malice, Sky Kingdom, and Summer Front, who did not all have that many representatives but allowed for some preliminary impressions to compare at the next two venues.

At Saratoga, of course, the stampede began in earnest with the significant volume of yearlings by American Pharoah, Honor Code and Liam's Map–the three that have long been expected to dominate this crop. This was the first hint that the uniformity which we'd begun to see with Competitive Edge and to a certain extent with representatives of the A.P. Indy line became starkly clear with the progeny of at least two of them–American Pharoah and Honor Code. It also became obvious that there was another lurking in the wings who could claim such mold-stamping–Carpe Diem.

This pattern continued at Keeneland, where progeny of a couple more took the eye at first glance, and on deeper physical inspection. By the time that sale ended, a pattern had begun to form.

American Pharoah, who has a very strong shoulder and is very reminiscent of his grandsire Empire Maker, showed that he could pass on that phenotypical look, coupled with a strong back end. Honor Code, whose striking resemblance to what you might expect when you blend A.P. Indy's elegance and strong shoulder with Storm Cat's overpowering quarters, threw out so many duplicates of himself–right down to his white legs–that one had to wonder if there were clones afoot. Carpe Diem, on the other hand, is a somewhat faster-looking version of Giant's Causeway, and his consistency in passing this on raised more than a few favorable eyebrows.

What? We glossed over one? No, because that one, Liam's Map, may turn out to be the most interesting of the bunch in terms of racing accomplishment without adherence to a type. Like many sons of Unbridled's Song, Liam's Map has thrown a wide variety of physical types in his first crop, which might lower some eyebrows among those who adhere to the “must resemble sire” theory of probable success for a stallion. That theory has been shot down by reality many times, but let's just point out that notwithstanding promising young sires like Cross Traffic and Mission Impazible, not all the sons of Unbridled's Song are gray. Midshipman and Will Take Charge, please take a bow. In any case, the colts by Liam's Map adhered a bit more to his slightly downhill miler type, while his fillies showed more refinement.

Others that left an impression from stamping their get include Summer Front (muscular turf types with a bit of a Sadler's Wells look), Tonalist (more Pleasant Colony than Tapit), Lea (blockier than First Samurai, more of a throwback to Giant's Causeway), and Bayern (nothing flashy, more of street fighters).

At this point in the assessment process, it is quite clear that this crop may be best sorted out at the end of the 2-year-old sales next year. But for now, imagine that one of each of the sires mentioned herein had a representative in a painting similar to “The Horse Fair,” showing them fired up behind the starting gate at Belmont Park to be let loose in a race at a mile.

After the gates opened, there would be an abundance of speed from some (Competitive Edge, Bayern, Carpe Diem, Liam's Map, Race Day, Palace), a gathering together from others (American Pharoah, Constitution, Lea, Tapiture), while a few might lag until the leaders pass the quarter pole (Commissioner, Honor Code, Palace Malice, Sky Kingdom, Summer Front, Tonalist). Then some would back up and others would move up and others might be flying, but in the end no more than a couple of lengths would separate the entire field.

That would be a masterpiece. Stay tuned.