Home » Archive » Top News Europe » Blue Is The Colour In Japan Cup, As Euros Strike Out

Blue Is The Colour In Japan Cup, As Euros Strike Out 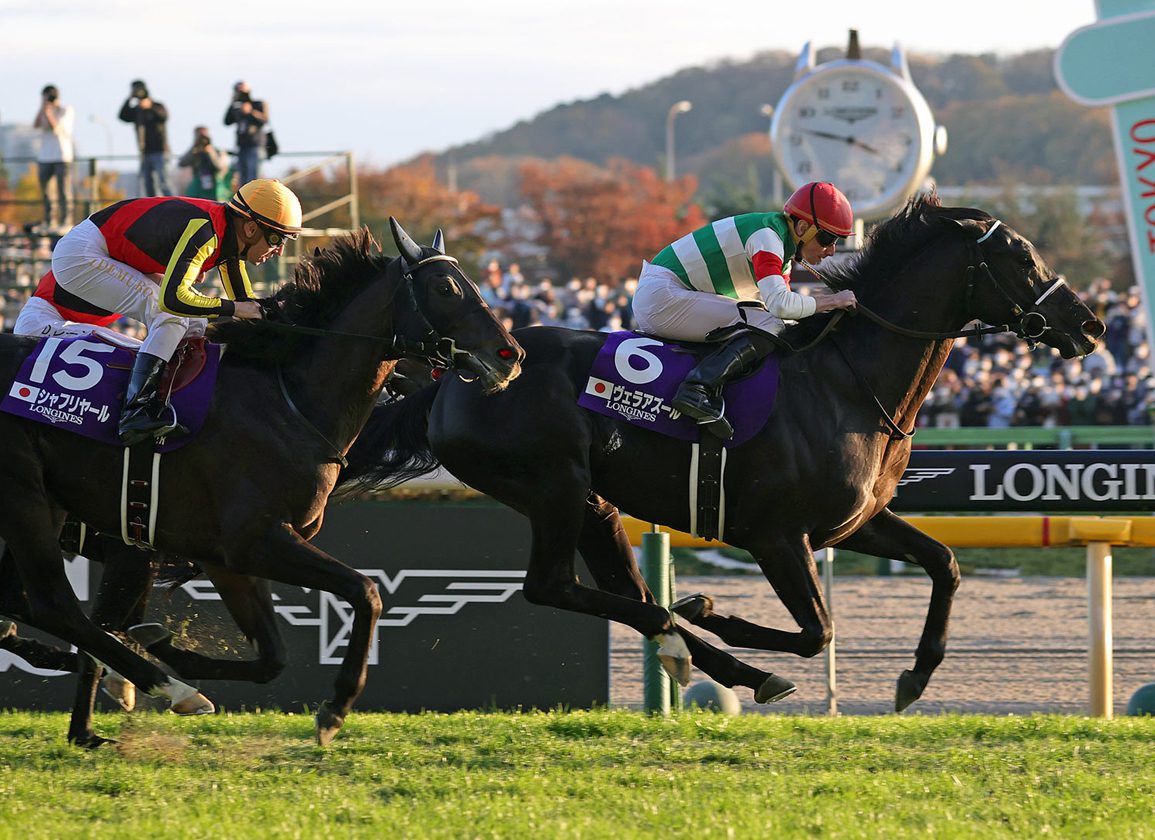 The reign of 2005 G1 Japan Cup hero Alkaased (Kingmambo) will have to stand as testament as the last foreign-bred winner to claim the 2400-metre contest for another year once again, as Vela Azul (Jpn) (Eishin Flash {Jpn}), under an icy Ryan Moore steering job, prevailed for Japan. A Carrot Farm silksbearer, the 5-year-old was three-quarters of a length to the good of 2021 G1 Japanese Derby and 2022 G1 Dubai Sheema Classic victor Shahryar (Jpn) (Deep Impact {Jpn}) on the line. Grand Glory (GB) (Olympic Glory {Ire}), who is bound for broodmare duty in the Land of the Rising Sun for Shadai's Teruya Yoshida, was best of the international raiders, running sixth.

Third choice at 7-2 in this Group 1 bow, Vela Azul raced in the back half of the field as Unicorn Lion (Ire) (No Nay Never) cut out steady fractions of :24 flat and :48.80. In close quarters entering the clubhouse turn, the Shiraoi Farm-bred was in a good rhythm, and held his position as he edged up to midpack. The pacesetter threw in the towel with a quarter mile remaining, as several foes loomed up with chances in the straight.

Stonewalled behind a wall of horses in upper stretch, gaps kept slamming in Moore's face, and it was not until the 200-metre mark, that a razor-thin hole appear. Just as Moore was sending Vela Azul through, that too, disappeared, and the Englishman redirected his charge back toward the inside. Miraculously a path opened 100 metres from home, and Vela Azul bulled his way through, hitting the front in the dying strides to clinch the victory. Favoured at 12-5, Shahryar, too, came from well off the pace, to master Weltreisende (Jpn) (Dream Journey {Jpn}) who had briefly anchored the vanguard and was a neck back in third. Tom Marquand was a half-length behind aboard Japanese Filly Triple Crown Winner Daring Tact (Jpn) (Epiphaneia {Jpn}) in fourth. 2022 G1 Grand Prix de Paris scorer Onesto (Ire) (Frankel {GB})'s momentum was halted 400 metres from the wire, and he also lacked racing room in deep stretch to take seventh.

“He broke OK,”said trainer Kunihiko Watanabe. “The pace was rather slow, but my horse has a good late charge and I trusted him to make a good run and. He was in good condition coming into this race but he exceeded our expectation. He is five years' old but he gets better and better and still has room for improvement. The reason for racing him on dirt early in his career was because he had leg issues [fractures] as a young colt and in order to race him with less risk he was raced on dirt. However, I did think he had an aptitude to race well on turf and it was only a matter of timing as to when to shift to turf racing.”

“I was very lucky to ride a talented horse,” said Moore, who was winning his second Japan Cup after piloting Gentildonna (Jpn) (Deep Impact {Jpn}) to her second consecutive edition in 2013. “The pace was very steady for the Japan Cup. The horse never had much room, but when he did he quickened up very well so he was very impressive today. I had a good horse that got me out front and we had a nice spot–it wasn't too far off the pace and following a good horse, the horse in front was having to wait and I was having to wait [too], and when he found a bit of room he quickened up very well. I suppose for today being towards the inside wasn't a disadvantage.”

Making his first 16 starts on dirt, without a black-type race on his resume, although he did win once at three and once last term, Vela Azul became an entirely different creature switched to firm turf second up this year, running off with the Awaji Tokubetsu over 2600 metres in March. Third in both the Sunshine S. and Ryokufu S. at Nakayama in April and Tokyo in May, respectively, the 5-year-old sealed the first half of his season with an 1 3/4-length score in the June S. over course and distance on June 11. He returned on Oct. 10 to take the G2 Kyoto Daishoten from off the pace at Hanshin by 2 1/2 lengths in 2:24.30 against several of these as second favourite.

Tops of a trio of stakes winners for his G1 Japanese Derby/G1 Tenno Sho (Autumn)-winning sire, Eishin Flash, Vela Azul is the son of King's Best's first scorer at Group 1 level. He becomes the fifth top-shelf victor for the French Deputy horse Kurofune as a broodmare sire.

The sixth of seven foals of racing age and one of five winners for his dual-winning dam who did her best work when breaking her maiden in the mud going 1800 metres at Hanshin at three and over a fast dirt strip at Fukushima over 1800 metres later that year, Vela Azul is by some margin the best of the septet. Vela Blanca (Jpn) (Kurofune)'s latest progeny is a yearling filly by World Ace (Jpn), and, although she was covered by Bago (Fr) later that spring, she did not produce a foal this term.

Second dam Admire Sunday (Jpn) (Sunday Silence), runner-up at listed level, did an admirable job in the paddocks with five black-type horses to her credit led by G1 Shuka Sho heroine and Japanese Champion 3-Year-Old Filly Adventura (Jpn) (Jungle Pocket {Jpn}). Adventura's full-sister, Tall Poppy (Jpn) (Jungle Pocket {Jpn}), was also a Classic winner and a champion of her generation as a juvenile. Third dam Moon Indigo (El Gran Senor), herself a half-sister to Group 1 winner Moonlight Dance (Alysheba), is a product of French champion and Group 1 winner Madelia (Fr) (Caro {Ire}), who claimed both the 1977 French 1000 Guineas and the French Oaks alongside the Prix Saint-Alary.